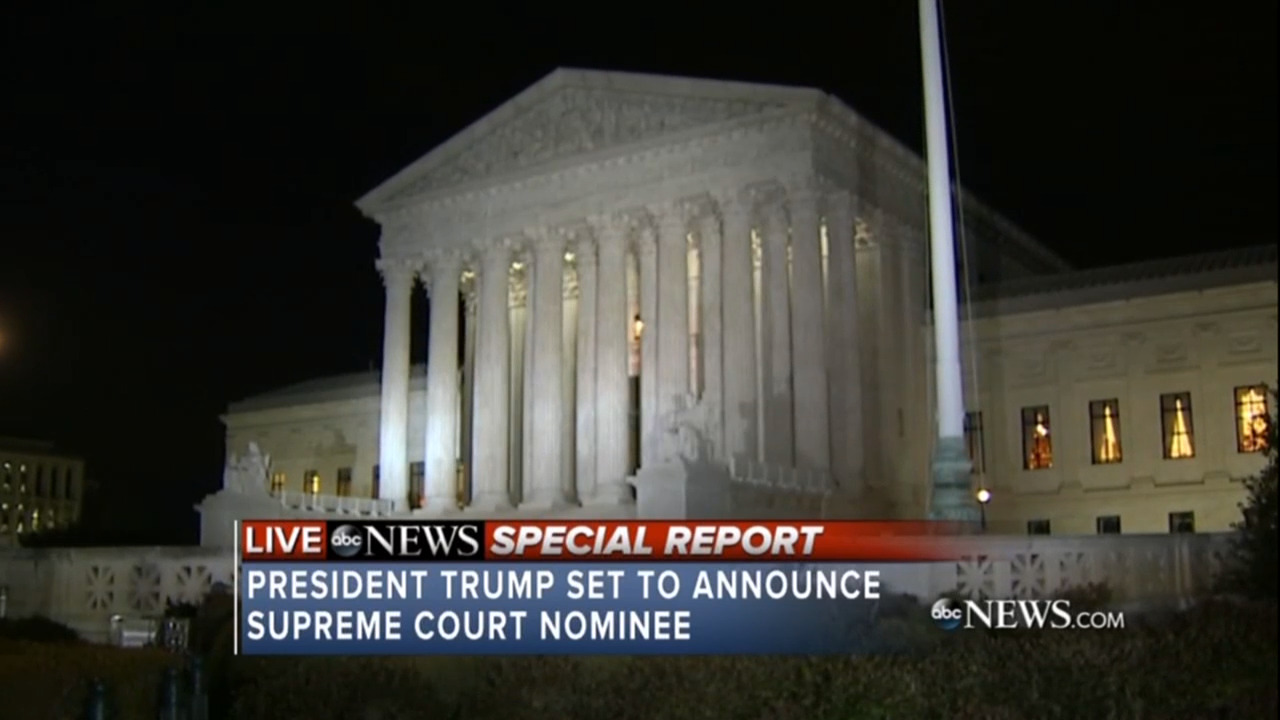 President Trump won’t officially announce his latest U.S. Supreme Court nominee until this evening, but it’s already easy to predict the liberal media’s spin. As with all recent Republican nominees, reporters will repeatedly label them as “conservative,” which will nicely reinforce the Democrats’ strategy to paint them as outside “the mainstream.”

There’s nothing wrong with calling conservative nominees “conservative,” but when Democratic Presidents announce their Supreme Court nominees, those same reporters can’t find the words to call those choices “liberal.” 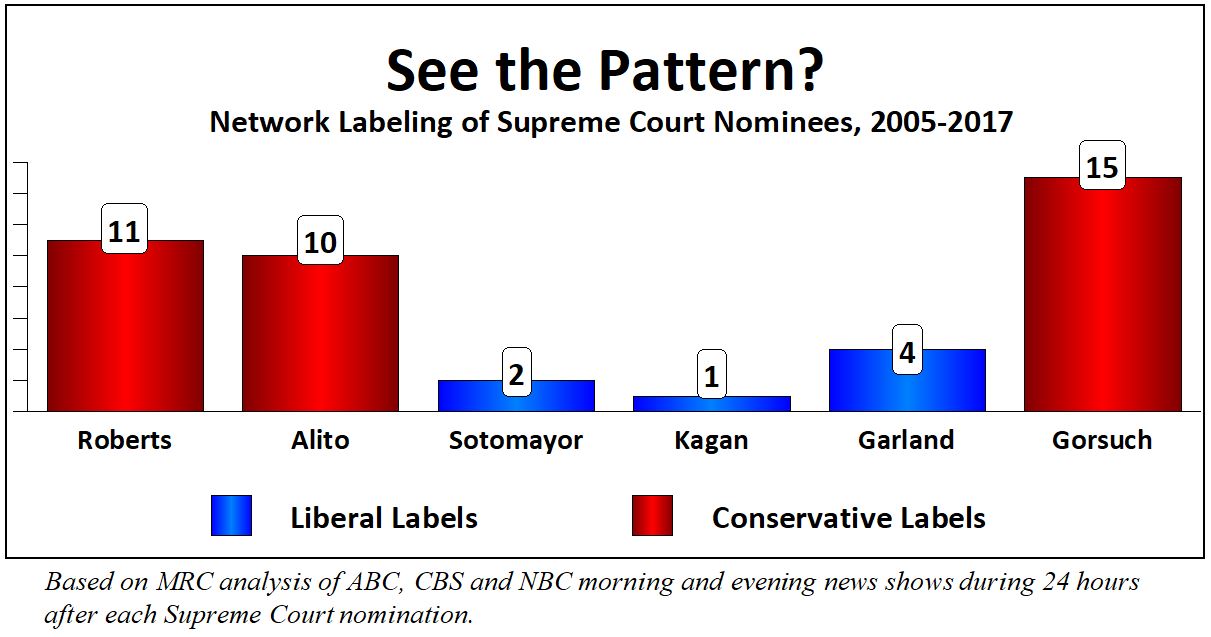 In fact, some reporters openly worried that liberal President Barack Obama was somehow betraying the Left when he elevated Sonia Sotomayor and Elena Kagan to the Court in 2009 and 2010. The rest spent much of their coverage doting on the wonderful life stories and anecdotes fed to them by the White House PR machine:

■ Bob Schieffer: “This woman has a life story that you couldn’t make up! I mean, you know, she’s born in the public projects, in the shadow of Yankee Stadium, a single parent household, she goes to a Catholic school, she gets scholarships to the best schools in the country, Princeton and Yale, she overcomes all that while dealing with diabetes all her life, and she is Hispanic....This was the political advisor’s dream candidate.”...
Anchor Katie Couric: “It is a very, as you say, very, very compelling life story.”
— Exchange during CBS’s live coverage of President Obama’s selection of Sonia Sotomayor, May 26, 2009.

■ Co-host Diane Sawyer: “The battle begins: How will President Obama’s Latina powerhouse handle the opposition?”...
Correspondent Claire Shipman: “Even as a little girl, growing up in a drug-ridden South Bronx housing project, stricken with juvenile diabetes, she had that trademark knack: instead of seeing dead ends, young Sonia saw possibilities; instead of giving up, she investigated every angle....She’s also an avid Yankees fan, a mean guacamole maker, and a fierce biker.”
— ABC’s Good Morning America, May 27, 2009.

■ “You know, for a Democrat, she [Sotomayor] has a pretty conservative record, a very much in the mainstream record....In fact, on a lot of criminal law issues, you could say that she’s more conservative than some members of the Supreme Court, including Justice Scalia, perhaps.”
— NPR’s Nina Totenberg on PBS’s Charlie Rose, July 13, 2009.

■ ABC’s Jan Crawford Greenburg: “Republicans argued her views on issues like abortion and gun rights, and her controversial speeches, proved Sotomayor was a liberal activist who would rely on empathy. But Sotomayor — calmly, persistently, repeatedly — described herself differently, sounding almost conservative.”
Judge Sonia Sotomayor: “The great beauty of this nation: that we do leave those law-making to our elected branches, and that we expect our courts to understand its limited role.”
— ABC’s World News, July 16, 2009.

■ “I heard and saw a picture of a family studying at night, sweating over school work....I’m getting one of those thrills I get about America. I’m sorry, I’m shouldn’t say this. And I’m getting it again. When she [Judge Sotomayor] talked about sitting at that table and not being a genius like Barack Obama, not being one of these people that can walk into a college scholarship, who had to sweat for it.”
— MSNBC’s Chris Matthews during live coverage following Sotomayor’s opening statement to the Senate Judiciary Committee, July 13, 2009.

■ “The selection of Solicitor General Elena Kagan to be the nation’s 112th justice extends a quarter-century pattern in which Republican presidents generally install strong conservatives on the Supreme Court while Democratic presidents pick candidates who often disappoint their liberal base. Ms. Kagan is certainly too liberal for conservatives, who quickly criticized her nomination on Monday as a radical threat. But much like every other Democratic nominee since the 1960s, she does not fit the profile sought by the left, which hungers for a full-throated counterweight to the Court’s conservative leader, Justice Antonin Scalia.”
— New York Times reporter Peter Baker in a May 11, 2010 front-page “news analysis.”

■ “Who is really most frustrated with the pick? It seems as many liberal groups are upset by this as are conservatives....On the left, she may not be liberal enough — that’s the complaint there. Some progressives say she’s too much of a blank slate to know how she stands on any issue.”
— Anchor Peter Alexander during the 10am ET hour of MSNBC Live, May 11, 2010.

■ “We know she [Supreme Court nominee Elena Kagan] was a spectacularly successful dean at Harvard Law School where she was the first female dean — that she just moved the place, got it really moving again. Students loved her. She knocked heads on the faculty to get hires done. She was a spectacularly successful policy bureaucrat in the Clinton White House.”
— NPR’s Nina Totenberg on Inside Washington, May 14, 2010.

■ Legal correspondent Nina Totenberg: “In some ways, the descriptions of Elena Kagan as dean sound a little bit like the beginning of the old Superman TV series.”
Introduction to 1950s version of Superman: “Superman, who can change the course of mighty rivers! Bend steel in his bare hands!”
Totenberg: “Translate that to Harvard, and you can almost hear the music. [Superman theme music in background] Kagan, who can raise money by the millions! Kagan, who can end the faculty wars over hiring! Kagan, who won the hearts of students!”
— Report on NPR’s Morning Edition, May 18, 2010. (Listen to the audio clip)

■ “She was intellectual, yes, but also full of personal charm, say colleagues, and a determination to be open-minded. It [Harvard Law School] is an institution usually resistant to change, some might say an immovable object, until it was confronted with the irresistible force of Dean Elena Kagan....Colleagues argue Kagan’s style is just what the Court needs.”
— ABC’s Claire Shipman on Good Morning America, June 28, 2010.

■ Host Al Hunt: “Margaret, if you were a Senator, would you vote for Elena Kagan?”
Bloomberg’s Margaret Carlson: “Um, twice if I could....She just excelled. It’s been so long since I’ve seen anyone in public life joyful about being there, and that was what was infectious about the hearings. When Lindsey Graham asked her about the Christmas Day bomber, he then switched with, ‘Where were you on Christmas?’ And she said, ‘Like all Jews, I was at a Chinese restaurant.’ She just said it right out. It brought the house down.”
— Bloomberg’s Political Capital, July 2, 2010.