Stepping Up: 28 States Take on Big Tech; 20 Move to Prohibit or Discourage Censorship

Congress has remained locked in a stalemate over how to tackle Big Tech tyranny. Meanwhile, state governments have stepped up and decided to take matters into their own hands where the federal government has failed.

The partisan gridlock in Congress grew more apparent as Republicans and Democrats clashed with Big Tech executives —  and with each other —  in a March 25 hearing. Twenty-eight states have introduced or passed legislation to take on Big Tech in some capacity. Seventeen of those  states  have proposed bills that would prohibit or discourage censorship in some way. None of those bills has passed into law as yet. Every state except for Georgia and South Carolina has joined antitrust lawsuits against Big Tech.

However, state legislatures were not the only ones fed up with Big Tech. State attorneys general have stepped up as well. Forty-five states and territories have filed antitrust complaints against Google across two different lawsuits. A coalition of 48 states and territories have filed an antitrust lawsuit against Facebook. “These companies are extremely powerful, extremely wealthy,” Texas Attorney General Ken Paxton said in a call with MRC. “Unless we start addressing this very soon, we may lose our opportunity to address some of the wrongs.”

The majority of the states that have proposed banning or discouraging censorship are Republican-led. Many of the pieces of legislation were also introduced following former President Donald Trump’s suspension from several Big Tech platforms. 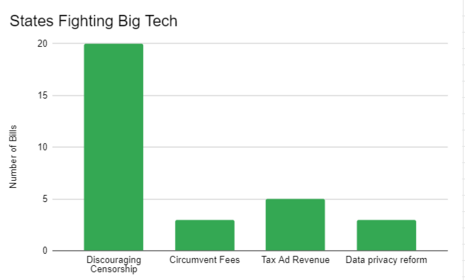