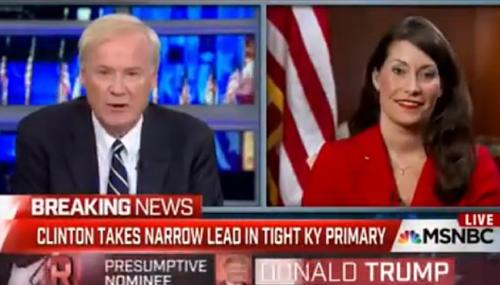 P.J. Gladnick
May 18th, 2016 3:33 PM
One of the duties of the Kentucky Secretary of State is to oversee elections. So shouldn't it seem a bit strange that such a person, Alison Lundergan Grimes, acts in a blatantly unprofessional manner by publicly gloating over the loss of a candidate she opposes by mocking him? Not to MSNBC's Chris Matthews. He not only failed to question this, he happily gushed over Grimes while… 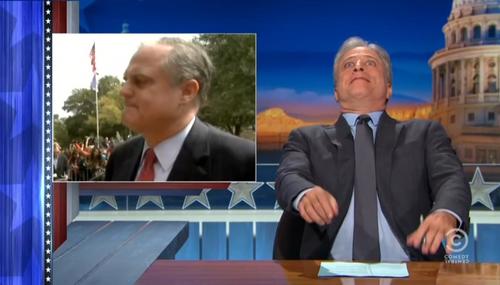 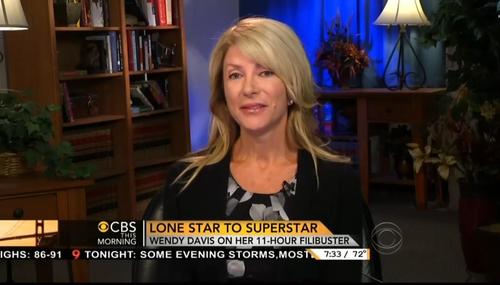 Geoffrey Dickens
October 29th, 2014 10:27 AM
Despite a plethora of Democratic candidates this year who have embarrassed their party – from  Wendy Davis attacking her opponent’s disability to Kentucky Democratic Senate candidate Alison Grimes refusing to say if she voted for the President to Nikki Haley’s Democratic male opponent calling her a whore – the Big Three (ABC, CBS, NBC) networks have been almost silent… 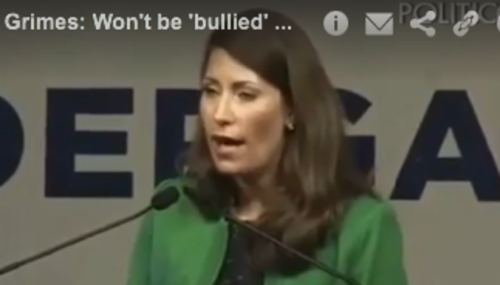 Tom Blumer
October 24th, 2014 6:21 AM
Imagine the pile-on that would be occurring from other members of the nation's establishment press if a Republican or conservative U.S. Senate candidate went after an individual member of the press as Alison Grimes just has against NBC/MSNBC reporter Chuck Todd. The "How dare you?" cries would be everywhere. It's hard to see how employing such a tactic works to get votes, but… 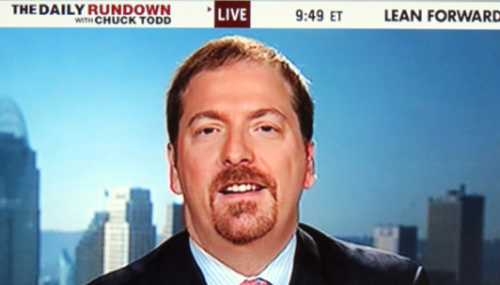 Tom Blumer
October 21st, 2014 9:53 PM
On Friday in a Facebook hangout, in a statement noted Saturday afternoon by Tim Graham at NewsBusters, MSNBC's Chuck Todd described himself as "stubbornly neutral." Sunday, Mr. "Stubbornly Neutral" attacked the NRA on "Meet the Press" for having the nerve to oppose President Obama's Surgeon General nominee, a man who is obsessed with gun control. 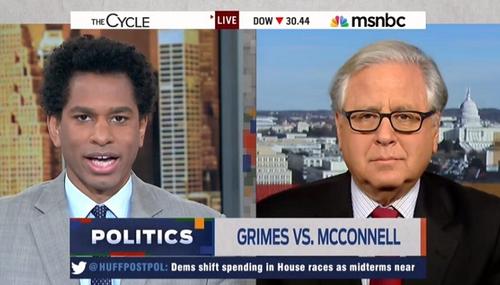 Ken Shepherd
October 14th, 2014 5:40 PM
Kentucky Secretary of State and Democratic U.S. Senate nominee is "insulting the intelligence" of Bluegrass State voters when she insists she cannot disclose for whom she voted in the 2008 and 2012 presidential elections. That was the assessment of MSNBC contributor Howard Fineman, appearing on the October 14 edition of The Cycle in a panel discussion handicapping the 2014 Senate races… 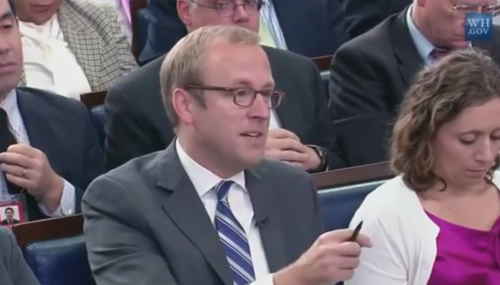 Jeffrey Meyer
October 14th, 2014 3:12 PM
Alison Lundergan Grimes, the Democratic candidate for Senate in Kentucky, has been mocked repeatedly for refusing to tell voters if she voted for President Obama in 2008 and 2012 citing the sanctity of the ballot box as her reason. With Grimes continuing to not answer a basic question about her political leanings, Jonathan Karl, ABC’s Chief White House Correspondent, hilariously asked White… 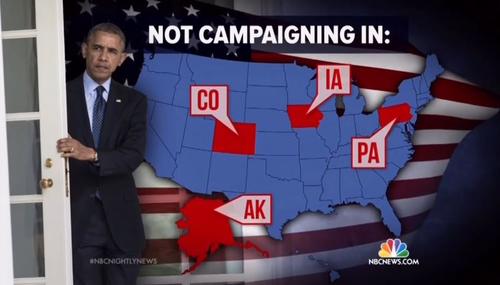 NBC Banishes Story to Sunday on Obama's Unpopularity Ahead of Midterms

Curtis Houck
October 13th, 2014 11:49 PM
On Sunday, NBC Nightly News took the unusual step of running a story that not only discussed the upcoming midterm elections but also President Obama’s unpopularity on the campaign trail as Democrats struggle to keep control of the Senate.  The problem with the story, however, was that it aired on Sunday night, when millions of Americans are watching football, spending time… 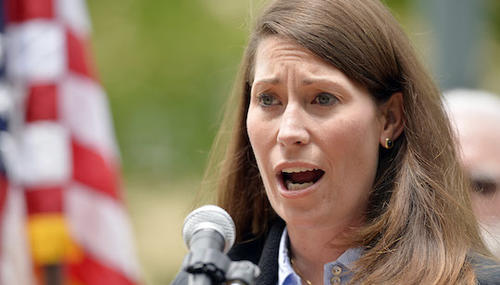 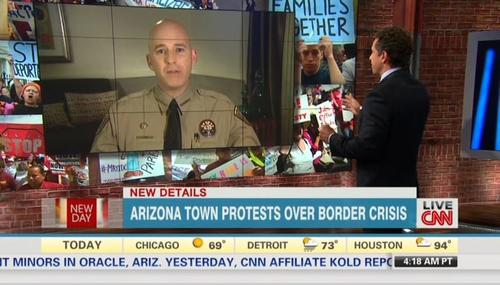 Connor Williams
July 16th, 2014 2:40 PM
Discussing the Kentucky Senate race between Mitch McConnell (R) and Kentucky Secretary of State Alison Lundergan Grimes (D), All In’s Chris Hayes cheered the Democratic candidate on, despite blatant falsehoods in her political ads. While Hayes did note those errors in the segment, he brushed them aside to say that in reality those lies are the truth. The ad featured Grimes sitting next… 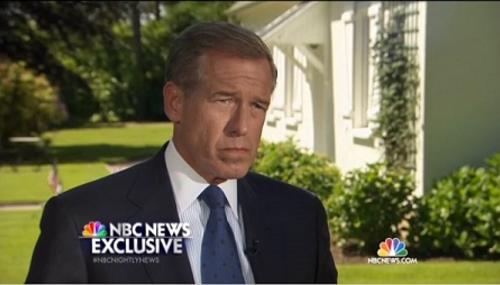 P.J. Gladnick
June 6th, 2014 8:03 PM
Moisture is the essence of wetness, and wetness is the essence of beauty. ---Derek Zoolander. The campaign of Alison Lundergan Grimes, who is running as the Democrat candidate for Senate from Kentucky, was in a rush to differentiate her from President Obama's new EPA regulations on coal. Apparently they didn't have time to check out the background of the "coal miner" whose… 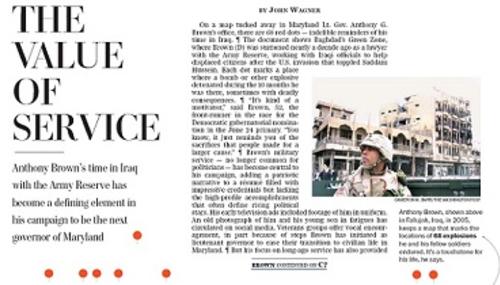 WashPost Cheers Alison Lundergan Grimes: ‘Running With, Not From, Ge

Jeffrey Meyer
May 22nd, 2014 4:04 PM
Democrat Alison Lundergan Grimes is challenging Senator Mitch McConnell (R-KY) in November, and the Kentucky Democrat seems to be the liberal media’s newest political darling.  A front-page Washington Post piece by Ben Terris on Thursday, May 22 declared that Ms. Grimes is “Running With, Not From, Gender. (In Heels.)” before devoting nearly all of the 27-paragraphs… 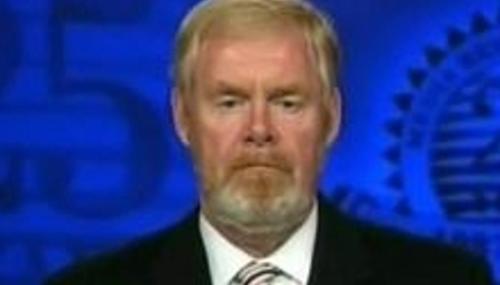 Paul Bremmer
May 1st, 2014 11:48 AM
Kenneth P. Vogel called attention to an important issue in a Wednesday Politico article – namely, the inherent hypocrisy of super-rich liberal donors who give big bucks to a Democratic party that repeatedly slams wealthy conservative donors like the Koch brothers. Vogel’s article focused on this week’s annual spring meeting in Chicago of the Democracy Alliance, a club of… 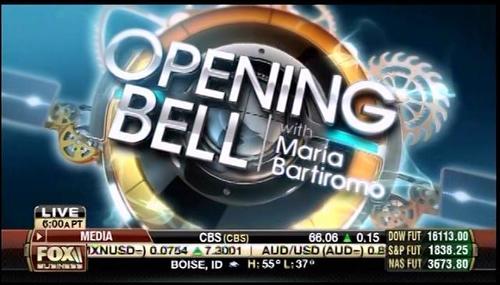 Jeffrey Meyer
February 24th, 2014 2:24 PM
The Washington Post’s Philip Rucker must love his new position as the unofficial spokesman for Bill and Hillary Clinton. In a 30-paragraph front-page piece in Monday’s Post, Rucker declared Democrat Alison Lundergan Grimes a “Young Senate Candidate, A Campaign With Star Power.” Rucker goes on to offer a glowing profile of Ms. Grimes, who is challenging Senate…