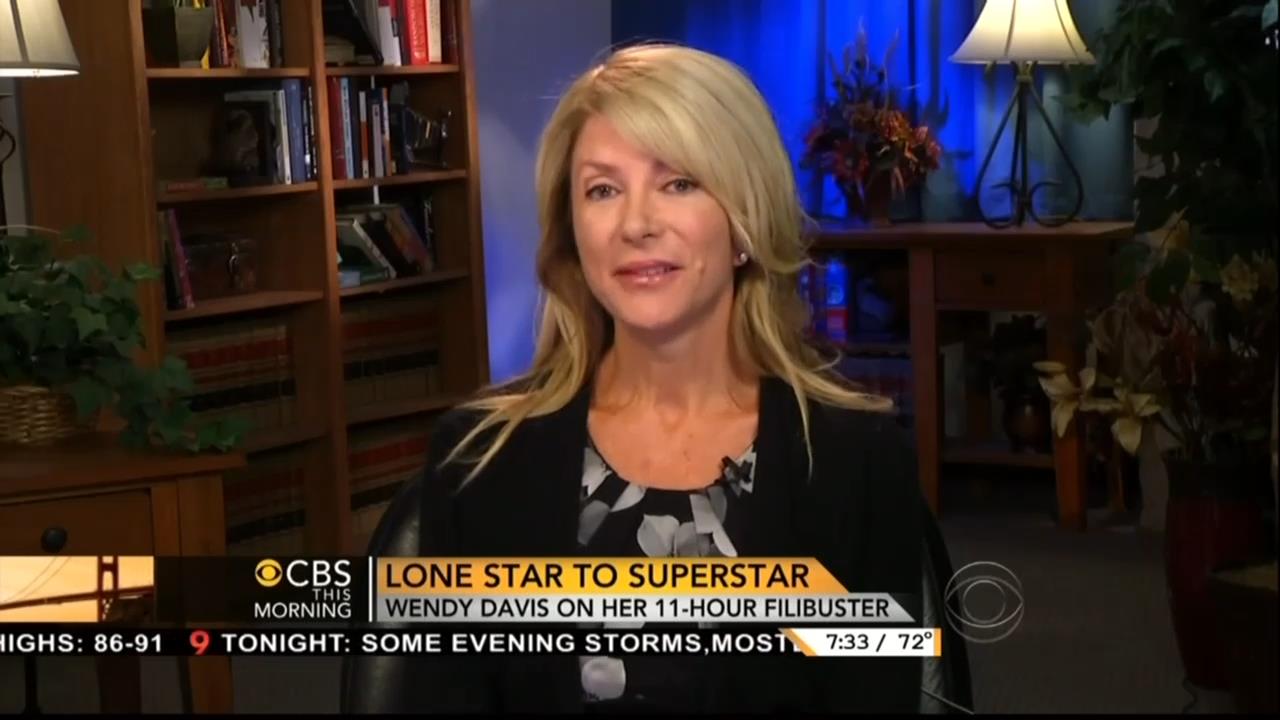 Despite a plethora of Democratic candidates this year who have embarrassed their party – from  Wendy Davis attacking her opponent’s disability to Kentucky Democratic Senate candidate Alison Grimes refusing to say if she voted for the President to Nikki Haley’s Democratic male opponent calling her a whore – the Big Three (ABC, CBS, NBC) networks have been almost silent in airing these stories on their evening and morning shows.

This is a far cry from past elections in which the networks were all too ready to use the embarrassments and scandals of Mark Foley, Larry Craig, Todd Akin to whack the entire Republican party.

The following is a list of 2014 Democratic candidates whose stumbles, gaffes and scandals have been, for the most part, covered up by the Big Three network evening and morning news shows (ABC's World News and Good Morning America; CBS Evening News and CBS This Morning; NBC Nightly News and Today): 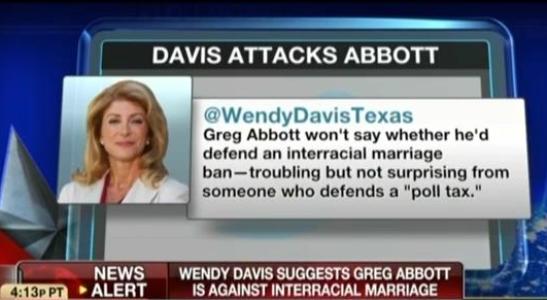 Texas Democratic gubernatorial candidate Wendy Davis became a media darling when she staged a filibuster for abortion but lately she’s been embarrassing herself and party with inept attacks against her Republican opponent in the Texas gubernatorial race.

On October 20 she implied Texas Republican Attorney General Gregory Abbott was against interracial marriage - even though Abbott’s wife, Cecilia, is a Latina. If Abbott were to be elected she would become the first Latina first lady of Texas. So far no network has aired a single second on this Davis attack.

Before that incident the Davis campaign ran a controversial ad depicting her disabled opponent as a hypocrite for supposedly not caring about the disabled. Despite even MSNBC liberals slamming the ad there hasn’t been an outcry from the networks. NBC’s Today show, on October 14, provided the only story on the wheelchair ad.

Sheheen eventually apologized, on October 27, for what could be interpreted as a slip of the tongue. But so far the incident has yet to be reported on any of the Big Three networks, even with the likes of Ann Romney condemning Sheheen. The wife of former GOP presidential candidate Mitt Romney, on October 27, pointed out the double-standard to CNN: “We need to make sure we have a safe place so that other women can feel like they can do this and these kinds of things aren’t going to happen to them. You get so sick of saying there is bias out there, but if a Republican had said this, it would be blowing up in their face like nobody’s business. Where is EMILY’s List? Where is N.O.W.? Where are they?”

Incumbent Democratic Senator Mark Udall gave network reporters an embarrassing moment they could’ve covered that included not one but two cringe-worthy points. During an interview with a Denver-affiliate Udall was asked to name three books he read, not only could he not come up with three books he followed it up with a comment with a less than politically-correct term.

On October 20 Mediaite reported: “But things really went off the rails when Udall was asked to name the three most influential books he’s ever read along with the last song he listened to. He quickly came up with Profiles in Courage by John F. Kennedy, but then, after a lengthy pause, he appeared to be stumped. ‘We can play this over, right, I mean re-tape this?’ Udall asked the interviewer, perhaps not realizing that the clip would go out as-is. ‘I’m brain dead today,’ he admitted after failing to come up with the last song he listened to.”

So far there have been zero stories on Udall’s “brain-dead” comment. Not exactly the reaction the networks had to similar incidents involving Republican candidates like Texas Governor Rick Perry’s inability to remember three government departments he would close. Or when Sarah Palin didn’t give Katie Couric a specific periodical that she regularly read.

Udall has also had to apologize for claiming in a debate that recently beheaded journalists James Foley and Steven Sotloff “would tell us, don’t be impulsive” in going after ISIS. He’s also been roundly mocked as “Mark Uterus” for his false scaremongering on birth control.

Democratic Candidate Refuses to Say She Voted for Obama

Following Kentucky Democrat Alison Lundergan Grimes’ repeated refusal to tell voters who she voted for in both the 2008 and 2012 presidential elections, all three networks ignored the story even though she doubled-down in her refusal to say who she voted for during an October 13 debate with incumbent Republican Senator Mitch McConnell.

Even NBC’s Meet the Press host Chuck Todd, on MSNBC, said Grimes “disqualified herself” by refusing to admit she voted for the unpopular president. (Although he eventually walked back that statement.)

Arkansas Democratic Senate candidate Mark Pryor’s stumbling response to a basic question about Ebola was something of a viral hit on the Internet but the networks, who lately have been prone to airing the latest Youtube sensations, have so far refused to air a single second on the bumbling response.

However, when Pryor asked to take a selfie with former President Bill Clinton, CBS This Morning aired a brief on the moment. On October 7 CBS co-anchor Gayle King even remarked: “Everybody likes a selfie.” Yet so far CBS nor any reporter at ABC and NBC have aired any stories on Pryor’s stumbling Ebola answer that even the liberal crew at MSNBC’s Morning Joe mocked.

Nets Don’t Notice Iowa Democrat’s Gaffes, But Do Cite Michelle Obama Botching His Name as a Plus

Iowa Democratic Senate candidate Bruce Braley has had a number of gaffes in his campaign. Most recently, in an October 11 debate, he denied he ever met anti-gun advocate Michael Bloomberg - when it turns out his own website touted a joint appearance.

Before that Braley insulted farmers in his own state, when he was caught on tape telling a group of trial lawyers at a January fundraiser that he would be their “voice” in Congress and also warned them that Republican Senator Chuck Grassley as “a farmer from Iowa who never went to law school” could be the next chairman of the Senate Judiciary Committee. So far ABC, CBS and NBC have yet to mention these political mistakes on their evening and morning shows.

However there was one gaffe connected to Braley the networks did cover. When Michelle Obama mistakenly called Bruce Braley, Bruce “Bailey” both CBS and NBC noticed the First Lady’s mistake with a NBC Today co-host even citing as a potential positive for the Democrat. On the October 13 Today show NBC’s Willie Geist observed that Braley is: “getting a lot of name recognition. Maybe it was like evil genius move, who knows?”

Republican Delaying a Debate for Seven Minutes Gets Coverage, Democrat No-Show at a Debate is Ignored 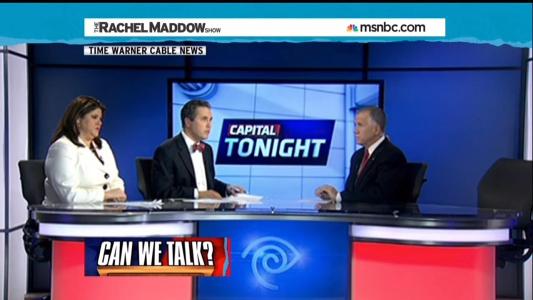 When Florida Republican Governor Rick Scott delayed his debate appearance by seven minutes because his Democratic opponent Charlie Crist was using a fan at his podium all three networks covered the controversy over “fangate.” CBS’s Charlie Rose, on the October 16 edition of CBS This Morning complained Scott was “worrying about a fan rather than talking about issues.” NBC’s Matt Lauer, on the October 16 Today crowed: “Florida’s Governor refuses to take the stage at a debate because of the electric fan under his opponent’s podium. An awkward moment that’s blowing up online today.”

But when North Carolina Democratic Senator Kay Hagan refused to even show up for a debate the networks didn’t say a thing. The networks also skipped new documents that showed the windfall Hagan’s family got from Barack Obama’s stimulus package, that Hagan voted for, was “worse” than previously thought.

There were no mentions of these stories on ABC, NBC or CBS. But CBS did run a full story on the North Carolina race on September 4, because CBS’s Norah O’Donnell actually moderated one of the debates where Hagan did show up. The race was also brought up on the September 5 CBS This Morning when Cosmopolitan editor Joanna Coles was interviewed by O’Donnell about candidates her magazine was endorsing. Coles called the North Carolina campaign one of the “key races” of 2014 because Hagan’s Republican opponent Thom Tillis “actually killed equal pay, the equal pay bill in his state. And he supports personhood, which actually means that they want to take the IUD out of circulation for women.”

Charging Campaign Flights to Taxpayer Not News, But Helping With a Keg Stand Is

Louisiana Democratic Senator Mary Landrieu got in trouble over the summer for illegally charging the taxpayers for her campaign flights. On August 12 CNN reported: “Sen. Mary Landrieu made headlines last November when she hitched a ride home on Air Force One with President Obama, but chose not to attend his event in New Orleans. Another lesser-known flight Landrieu took that same day mistakenly cost taxpayers more than $3,000. CNN has learned that the vulnerable Louisiana Democrat used government money to charter a private plane to travel to a campaign fundraiser, in violation of federal law. Landrieu spent more than $3,200 in taxpayer money to fly 400 miles round trip from New Orleans to Lake Charles, Louisiana, where she attended a $40-per person fundraising lunch with hundreds of women, according to Senate records and Landrieu campaign information. It is illegal to spend government money campaigning.”

This illegality received 0 stories on ABC, CBS or NBC evening or morning shows. However, NBC did find time to talk about the Louisiana senator helping a tailgating fan do a keg stand before an LSU football game. On the September 22 Today show NBC’s Matt Lauer touted how Landrieu “may do just about anything to get your vote” given that she was “in the middle of a really tough reelection campaign.” Substitute host Hoda Kotb added: “I think that wins her votes, personally. Landrieu is putting the spigot in his mouth....I do guarantee you, in Louisiana, that definitely helps. I mean that helps in the vote department. For sure, right?” CBS’s Nancy Cordes, on the October 27 Evening News, also mentioned the keg stand.