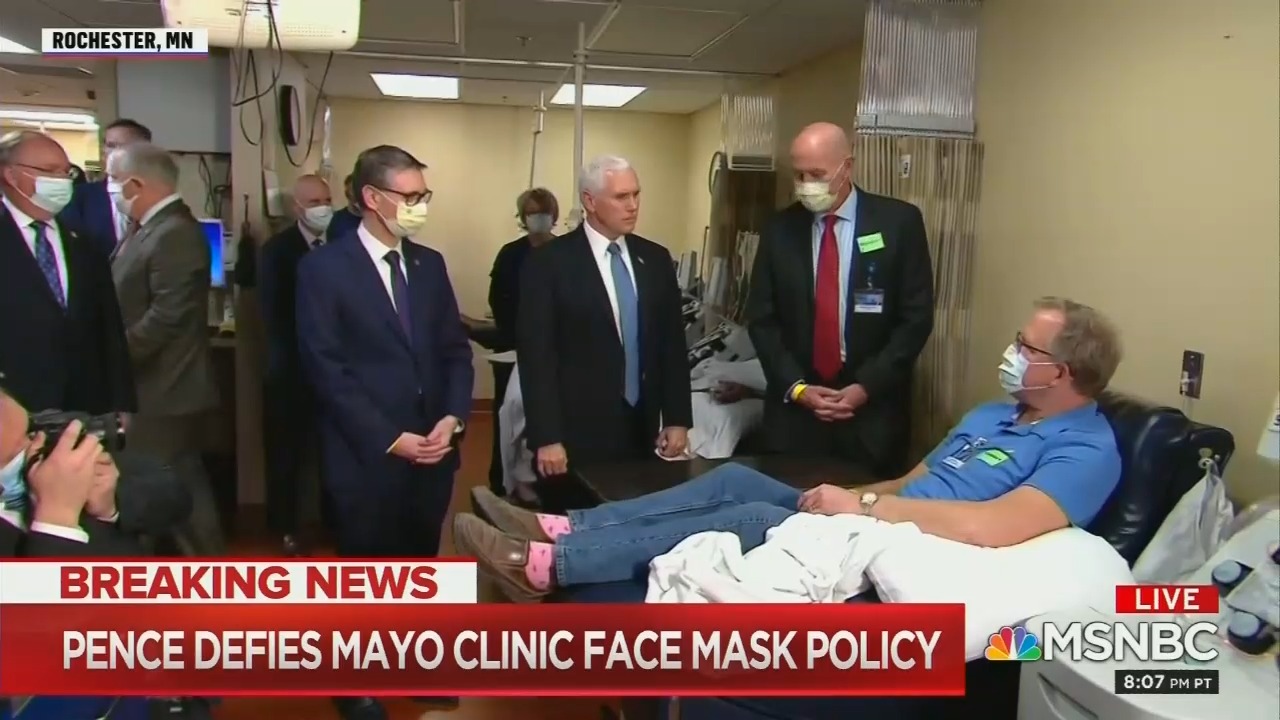 The liberal media have shown an aversion to covering Tara Reade’s sexual assault allegations against 2020 Democratic presidential candidate Joe Biden. But when it came to Vice President Mike Pence not wearing a mask at the Mayo Clinic Tuesday, the same liberal networks decided it was a scandal worthy of their attention, giving it three times more airtime in 24 hours compared to what they spent on Biden’s scandal in an entire month.

That’s in contrast with a TOTAL of 28 minutes and 44 seconds for Reade’s allegations since they first arose on March 25.

Sadly, ABC and NBC have yet to utter a single word about Reade, but they’ve spent one minute and 26 seconds and one minute and 53 seconds respectively boasting that Pence created “a controversy” for his “apparent case of do as I say, not as I do.”

So, a man who was heavily tested for the coronavirus not donning a mask was “a controversy” but credible allegations of a presidential candidate penetrating a staffer in 1993 wasn’t?

CBS has thus far spent only one minute and three seconds on Reade, but combined for three minutes and 48 seconds during Tuesday’s CBS Evening News and Wednesday’s CBS This Morning gloating that Pence “caused a bit of a stir.”

“Vice President Pence says he is often tested for coronavirus and since he does not have it, he avoided a mask so he could look healthcare workers and researchers in the eye and say thank you. Critics quickly pointed out a mask does not cover one’s eyes,” sniped anti-Trump White House correspondent Weijia Jiang.

CNN slightly increased its Reade coverage, growing its total on April 28 from 14 minutes and 54 seconds to 23 minutes and two seconds thanks to three new segments. That included CNN Tonight host Don Lemon actually pressed Stacey Abrams on the notion of a double standard between the treatment of Reade versus women who accused now-Justice Bret Kavanaugh in 2018.

However, their coverage of Biden’s alleged assault was dwarfed by CNN’s efforts to harangue the administration as Pence’s mask-gate fetched an angry 48 minutes and 21 seconds.

Here’s a sampling of the verbal grenades lobbed at Pence by CNN guests and personalities (click “expand”):

DR. JONATHAN REINER: Wow. So wrong. So tone deaf. Look, first of all, on one level this is just another in a series of mixed messages that we’ve gotten from this White House about this crisis…We want that message to be perpetuated by the President and Vice President, yet they refuse to do so. They refuse to set an example. I think it’s disgraceful.

DON LEMON: This is ridiculous. We all know that you can, look somebody in the eye while wearing a mask…Sorry, but you’re the boss of that task force. You know perfectly well that you should be wearing a masks -- a mask. You know that. Come on and there’s really only one reason not to. To be the only one not wearing a mask. That is for an audience of one…[T]hey seem to find leadership on this issue beyond them personally at a time when hundreds of millions of Americans are suffering and sacrificing and dying. But they can’t do it. We’re in the middle of a crisis…Do as I say and as I do. Wear a mask. It’s that simple…I can’t even believe we have to discuss this. Okay, here we are.

JAMES PHILLIPS: [B]etween that and what the President said about wearing a mask is just an abject failure of crisis leadership.

ALISYN CAMEROTA: Well, one other message that it sends is the rules don’t apply to me. The rules don’t apply to me is the message that it sends. And, you know, obviously, we all remember a time when Republicans were up in arms about when they thought presidents thought the rules didn’t apply to them, but then here is Vice President Pence not doing what we have all been told repeatedly for weeks that when you’re out in public, when you’re going to be coming within six feet of another human being, you must wear a mask so as not to endanger them. Now, what Vice President Pence said was because he had been tested negative, he thought he didn’t have to wear one, but, you know, as Sanjay Gupta and all our doctors said, that’s a snap shot in time, at that moment, at that hour, that you were negative. In the next 24 hours, you may have become positive. So, even that logic is faulty.

Finally, MSNBC was behind CNN on both, but they still doled out 32 minutes about Pence. Their Reade tally remained at four minutes and 39 seconds.

His evidence? This: “He only knows that his last test for coronavirus indicates that he didn’t have it the last time he took that test. Mike Pence could have then picked it up off a surface minutes after he was tested.” In other words, none.

The deranged Morning Joe panel also had some thoughts on Wednesday (click “expand”):

JOE SCARBOROUGH: How reckless. Unless you wear a mask over your eyes, you can still look them in the eye and, Mika, he can actually follow the guidelines. What a horrible example to Americans. It was for an audience of one, of course.

MIKA BRZEZINSKI: Clair McCaskill, the doctors who are on the front lines who are talking to Mike Pence and his presence in that hospital, they were wearing masks. I just wonder if you could, perhaps, describe for us, is it possible to describe the lengths that Mike Pence will go to please President Trump?

CLAIRE MCCASKILL: I don’t think that it’s measurable and, you know, the thing that’s saddest about this, you know, we all go back between being angry, frustrated, sad. What is so sad about this is that we have in this country always looked to the President and the Vice President to set an example, to model good behavior for American citizens and for our children. And for the head of a task force that has recommended wearing masks to go into a medical facility who has requested respectfully that he wear a mask, for him to think that the vanity of showing his face is more important than setting an example and role modeling for Americans….You would think Mike Pence would be more respectful of wanting to model everyone. We need to make sure we’re not conveying this virus. Wear a mask. It’s not that hard.

WILLIE GEIST: Yeah, and he said he was there to pay tribute to those doctors and health care professionals. What possibly could be more disrespectful than completely ignoring their rules and also their safety by not wearing the mask? It’s not just disrespectful, it’s going out of your way to be disrespectful and, as you guys said, to please President Trump, of course, who has said himself he doesn’t want to wear a mask.