If we're to believe the pose struck by five Associated Press reporters who contributed to a Sunday afternoon story on the topic, the spike in violent crime in the U.S. during the past nearly two years apparently needs its own episode of the old Unsolved Mysteries TV series.

"Experts can't point to a single reason" for the rise. The increase "is stumping law enforcement officials." FBI Director James Comey says, "I don't know what the answer is." But don't worry, say the AP reporters, because "the jump isn't enough to suggest there's a trend," and "it's a far cry from the more notorious early 1990s." The obvious genuine answer, the one which people who don't have blinders on clearly recognize, known as the "Ferguson effect," got scant notice, and wasn't directly named. It's almost as if the wire service has a Stylebook rule against using the term — and especially against recognizing the effect's legitimacy.

Here are the opening paragraphs of the AP dispatch (bolds are mine throughout this post):

US CITIES SEE UNEXPLAINED RISE IN VIOLENT CRIMES THIS YEAR

Violent crimes - from homicides and rapes to robberies - have been on the rise in many major U.S. cities, yet experts can't point to a single reason why and the jump isn't enough to suggest there's a trend.

Still, it is stumping law enforcement officials, who are seeking a way to combat the problem.

"It's being reported on at local levels, but in my view, it's not getting the attention at the national level it deserves," FBI Director James Comey said recently. "I don't know what the answer is, but holy cow, do we have a problem."

Americans have grown accustomed to low crime rates since a peak in the 1990s. But law enforcement started seeing a spike last year that has continued unabated. What's unusual, however, is that it's not happening everywhere. Chicago and Los Angeles are seeing homicides on the rise, but other places like Miami and Oakland are not.

The AP cited two cities where things are worse, and two where they're (allegedly) not, which might lead readers to believe that only half of large cities in the U.S. are seeing violent crime rise. We should be so lucky. In a May op-ed in the Wall Street Journal, the Manhattan Institute's Heather MacDonald noted the following:

Homicides increased 9% in the largest 63 cities in the first quarter of 2016; nonfatal shootings were up 21%, according to a Major Cities Chiefs Association survey. Those increases come on top of last year’s 17% rise in homicides in the 56 biggest U.S. cities, with 10 heavily black cities showing murder spikes above 60%.

Of course, the AP provided two "blame the guns" paragraphs in detailing the horrible increase in murders and shootings in Chicago:

"Our kids are afraid to go out of the house," said the Rev. Michael Pfleger, a Catholic priest and activist on the city's South Side. "You have children asking teachers to pray for them before they go home."

Some say the splintering of gangs has created deadly rivalries, others say the disbanding of specialized police units has helped embolden gangs. Guns are pouring into the city - with police saying they've seized more guns this year (3,500) than any city police department in the United States - but courts also have overturned or gutted the city's once-tough gun laws.

Earth to AP: Criminals didn't obey "the city's once-tough gun laws" when they were in effect. What those laws did is discourage law-abiding citizens from getting their hands on what they believe they need to defend themselves. Other cities saw violent crime decreases during the two decades before Ferguson without having such "tough" laws on the books.

As to Michael Pfleger, readers may recall that the Catholic priest, who advocates slavery reparations, was and probably still is best buds with President Barack Obama's and First Lady Michelle Obama's radical spiritual mentor, the infamous and now richly retired Jeremiah Wright.

Pfleger has his own track record of violent rhetoric, in particular calling for people who disagree with him on gun rights to be "snuffed out" — but lead reporters Lisa Marie Pane and Don Babwin considered him worthy of commenting on Chicago-area violence as a presumptively peaceful "activist." Hardly.

Here is AP's single indirect reference to the "Ferguson effect":

Some in law enforcement have speculated that a climate after the 2014 fatal shooting of an unarmed black teenager in Ferguson, Missouri, has made officers reticent about taking the steps needed to stop crime, but (Major Cities Chiefs Association executive director Darrell) Stephens says that tough scrutiny on policing has always been part of the job, even if it's "more visible, more strident" now.

A grand jury asked to consider indicting the officer involved in the "fatal shooting" of "unarmed black teenager" Michael Brown declined to do so, based largely on strong evidence that the physically imposing Brown was charging at the officer, who had the right to defend himelf.

If any event should not have generated the "climate" to which AP referred, it was Brown's death, which though tragic on many levels, was not the cut-and-dried "fatal shooting" of a supposedly sweet and innocent "unarmed black teenager" by a police officer the AP described. 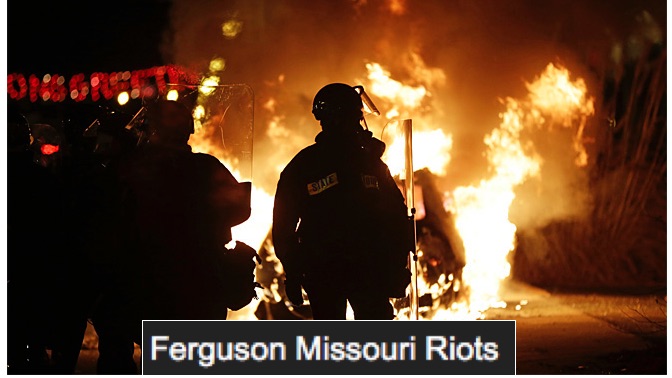 But the violent, far-left Black Lives Matter "movement" which professional agitators coalesced after Brown's death had too much invested in getting the opposite result. They took out their wrath by participating in and inciting rioting. The largely kid-glove treatment of rioters, the sympathy they received from President Barack Obama, then-Attorney General Eric Holder and the U.S. Department of Justice, and the accompanying insistence that police must curtail their use of common-sense crime prevention tactics, sent a signal to the nation's criminals that they could commit crimes with a greater chance of escaping meaningful punishment.

... the evidence is not looking good for those who dismiss the Ferguson effect, from the president on down. That group once included Richard Rosenfeld, a criminologist at the University of Missouri, St. Louis, who was an early and influential critic. Mr. Rosenfeld has changed his mind after taking a closer look at the worsening crime statistics. “The only explanation that gets the timing right is a version of the Ferguson effect,” he told the Guardian recently. “These aren’t flukes or blips, this is a real increase.”

A study published this year in the Journal of Criminal Justice found that homicides in the 12 months after the Michael Brown shooting rose significantly in cities with large black populations and already high rates of violence, which is precisely what the Ferguson effect would predict.

I would suggest that someone needs to buy the AP's reporters a clue, but that would be too kind. It's more than reasonable to believe that they know damned well that the Ferguson effect is playing out right in front of their eyes throughout U.S. urban areas, and that they don't have the integrity to acknowledge it.