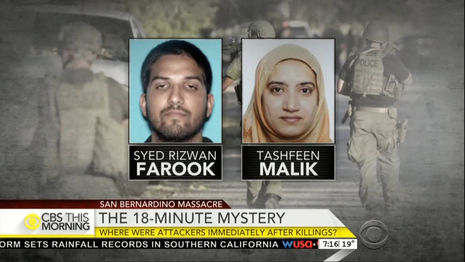 The December 2, 2015 attack, which left 14 dead and 21 injured, was conducted by a husband and wife, Syed Rizwan Farook and Tashfeen Malik, who had earlier posted on Facebook they had “pledge[d] allegiance” to the leader of ISIS. The FBI declared it an “act of terrorism.”

Yet before actual facts were known, TV viewers heard baseless speculation about who might be at fault. During live coverage on December 2, CNN law enforcement analyst Tom Fuentes suggested the perpetrators could have been “a domestic militia group, an anti-government domestic militia group wanting to attack the government.”

“It could be some right-wing group, for all I know,” CNN analyst Harry Houck echoed a few hours later.

The next day, when the identity of the killers was known, CNN host Erin Burnett still wondered why the wife joined in the attack. She asked an FBI profiler: “Could there be something else, anything else that could have explained her involvement? Something like a postpartum psychosis?”

Over on MSNBC, Chuck Todd fretted about the blowback upon learning the killers’ identity: “I have some fears of where this conversation goes, if this turns into being an American Muslim, an American citizen, and the investigation comes out that this is a radicalized situation and all this stuff. I think the consequences on our politics could be very ugly and very negative....It’s just going to raise the issue of Islamophobia again.”

Then there were usual suspects in the media’s anti-gun lobby. Despite the shooting occurring in deep blue California, which already had some of the most restrictive gun laws in the country, angry journalists lambasted those who offered thoughts and prayers instead of instant legislation. 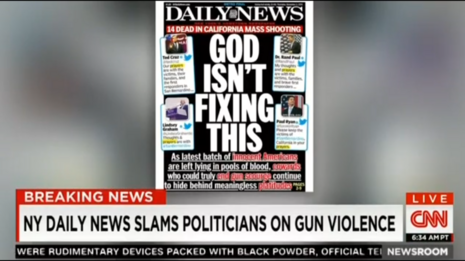 “Dear ‘thoughts and prayers’ people: Please shut up and slink away. You are the problem, and everyone knows it,” Washington Post columnist Gene Weingarten tweeted on December 2, just hours after the shooting occurred.

“GOD ISN’T FIXING THIS,” screamed the New York Daily News in a headline the next morning. The paper’s not-so-subtle front page message: “As latest batch of innocent Americans are left lying in pools of blood, cowards who could truly end gun scourge continue to hide behind meaningless platitudes.”

The rest of the New York media chimed in. “I thought that headline was very powerful,” an impressed CBS morning host Gayle King told viewers.

“We have to do something. As the New York Daily News said, God is not going to fix it. We have to fix it,” King’s co-host Charlie Rose agreed.

And they weren’t the only ones. Watch: