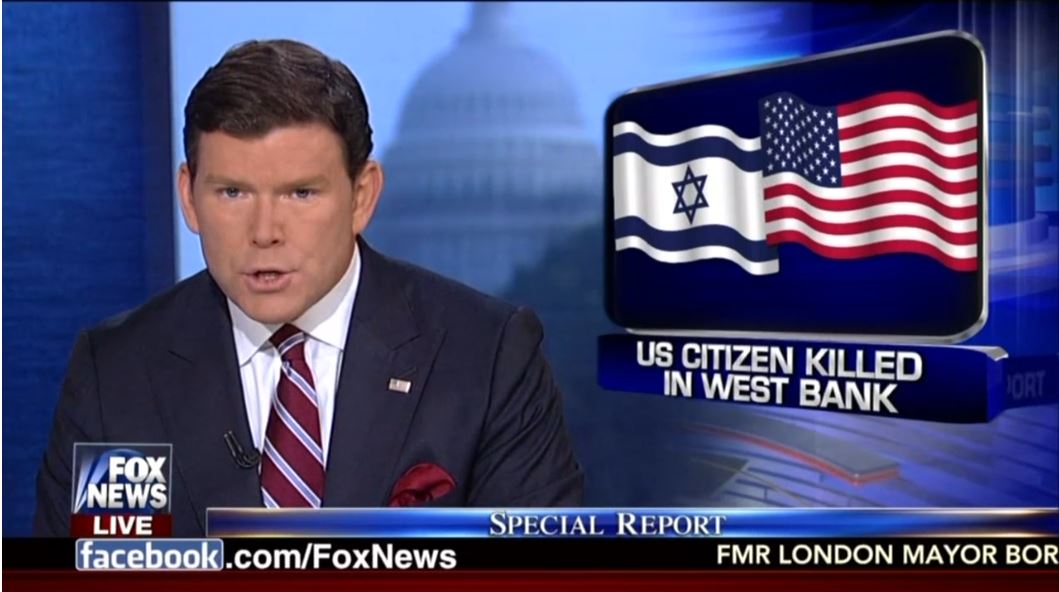 Early Thursday morning news broke that a 13 year girl was brutally murdered in Israel, and later that day it was released that she was American and killed by a Palestinian terrorist. As Fox News’ Bret Baier reported on Special Report, “Police say a Palestinian teenager snuck into a Jewish settlement Thursday and stabbed a 13-year-old American girl as she slept in her bed.” But the networks were silent about it that evening, they instead chose to dedicate six minutes and six seconds to Defense Secretary Ash Carter allowing transgender people to openly serve in the military.

CBS’ Josh Elliot was joyful, teasing at the top of Evening News, “A barrier falls. The military lifts its ban on transgender service members.” CBS led the night with the story stating that history was made and, “Transgender people will now be allowed to serve openly, and they will be eligible for any medically necessary care, including surgery.”

And CBS reporter David Martin whined that the US didn’t adopt the policy sooner saying, “The US military is not a world leader when it comes to treating transgender service members equally. 18 other countries already allow them to serve openly in uniform.” In his report Martin failed to report that the policy has opposition in Congress.

On NBC Nightly News, anchor Lester Holt at least admitted that the policy was controversial reporting, “The Republican head of the House Armed Services Committee says it's the Obama administration putting, quote, “politics over policy.””

ABC’s World News Tonight had the shortest coverage at 28 Seconds. Reporter Cecilia Vega only stated the Defense Departments decision and that, “One study estimates there are 2,500 transgender people now on active duty.”

In addition, the Spanish-language networks also failed to report about the murder of the young girl and they spent two minutes and 21 seconds covering Carter’s policy. Univision gave the issue 15 seconds while Telemundo reported on it for over two minutes. Telemundo did dedicate a section of the report to the concern of soldiers not accepting the policy.

BRET BAIER: A nine-month wave of violence in Israel claims its youngest victim. Police say a Palestinian teenager snuck into a Jewish settlement Thursday and stabbed a 13-year-old American girl as she slept in her bed. The State Department called the killing unconscionable today.

SAGE FOX: Of course I’m elated, it means I can go back to service

ELLIOT: History was made today when the Defense Department lifted one of the last bans on service in the armed forces. Transgender people will now be allowed to serve openly, and they will be eligible for any medically necessary care, including surgery. David Martin is at the Pentagon tonight.

DAVID MARTIN: Transgender people were the last service members who could be kicked out not for something they have done but simply because of who they were. Defense Secretary Carter ended that today.

ASH CARTER: Effective immediately transgender Americans may serve openly, and they can no longer be discharged or otherwise separated from the military just for being transgender. 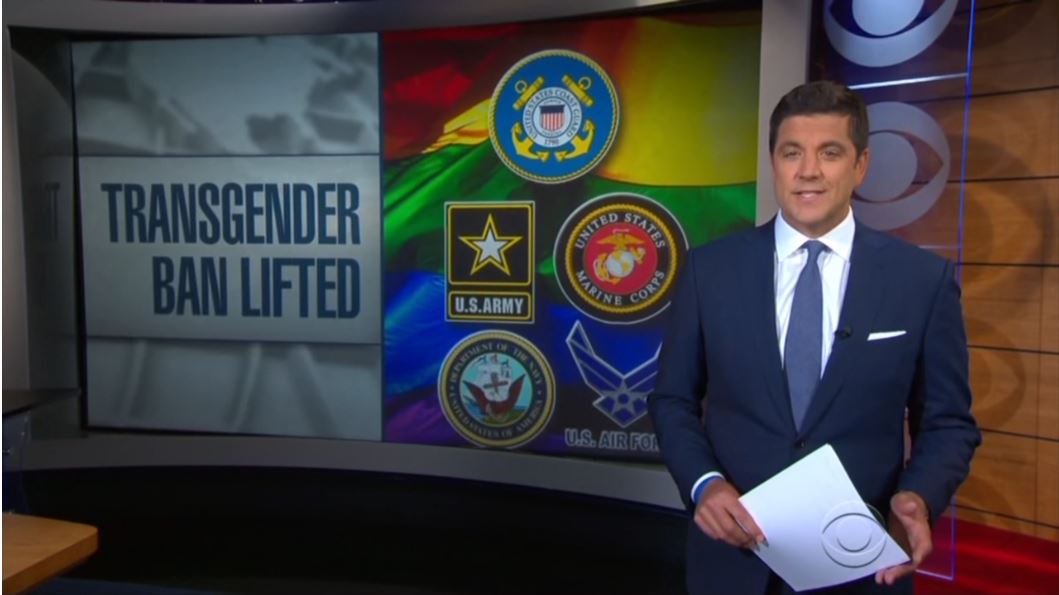 MARTIN: Estimates of the number of transgender people in the military range from a low of 4,000 to a high of 11,000 out of a total force of 2 million. Army Reserve Captain Sage Fox found her career put on hold after she changed genders, even though she says it made her a better officer.

FOX: Transitioning has allowed me to be better as a leader. I have gotten rid of the distraction of worrying about concealing who I really was.

MARTIN: Fox had to rely on private insurance to cover her surgery, but from now on, the military will cover the cost of sex change operations approved by a doctor.

CARTER: Our doctors will treat them and give them medically necessary treatment according to the protocols.

MARTIN: Once the service member switches gender, they would also switch to the barracks, bathrooms and showers used by their new gender. The decision comes after a year study during which secretary Carter personally met with transgender service members.

CARTER: They’ve deployed all over the world serving on aircraft, submarines, forward operating bases and right here in the Pentagon.

MARTIN: The US military is not a world leader when it comes to treating transgender service members equally. 18 other countries already allow them to serve openly in uniform. Josh?

HOLT: History and controversy as the Pentagon lifts its ban on transgender service members serving openly. It's a move being hailed by many but questioned by others. The Republican head of the House Armed Services Committee says it's the Obama administration putting, quote, “politics over policy.” Our Pentagon correspondent Jim Miklaszewski tells us more.

JIM MIKLASZEWSKI: After a year-long study, Defense Secretary Ash Carter has lifted the last gender-based barrier in the US military. 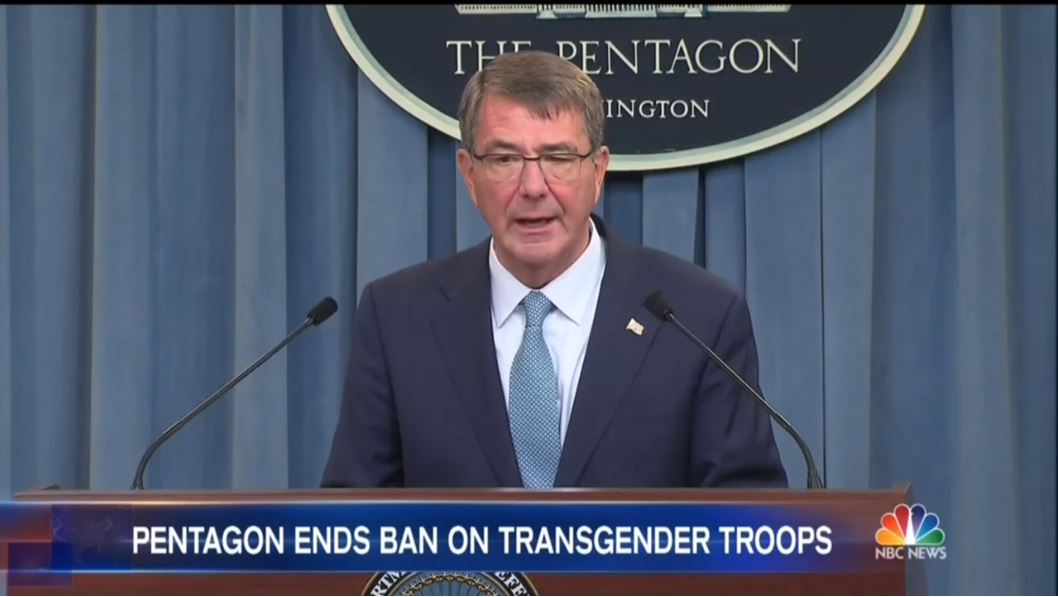 MIKLASZEWSKI: For the first time as many as 12,000 transgender men and women now in the military will be able to openly serve without fear of being discharged. And transgender recruits will be accepted by the military services.

MIKLASZEWSKI: Sage fox first served in the army as a male infantry soldier, but years later, after Sage was recruited into the Army Reserves as a transgender woman, she was quickly pushed out and put on inactive status.

FOX: It's fear, it's ignorance, it's bigotry, it's misinformation.

MIKLASZEWSKI: Lifting the current ban will not come fast or easy. The military services must come up with plans to provide psychological counseling and medical services for transgender forces including hormone treatments.

It could take a year before the plan is fully implemented, but as for Sage Fox, she's elated and looking forward to returning to active duty. Jim Miklaszewski, NBC news, the Pentagon.

CECILIA VEGA: And tonight, for the first time, transgender people are now welcome in the military. Defense Secretary Ash Carter announcing the immediate lifting of the ban today.

ASH CARTER: Our mission is to defend this country. And we don't want barriers unrelated to a person's qualification to serve preventing us from recruiting or retaining the soldier, sailor, airman or marine—

VEGA: One study estimates there are 2,500 transgender people now on active duty. 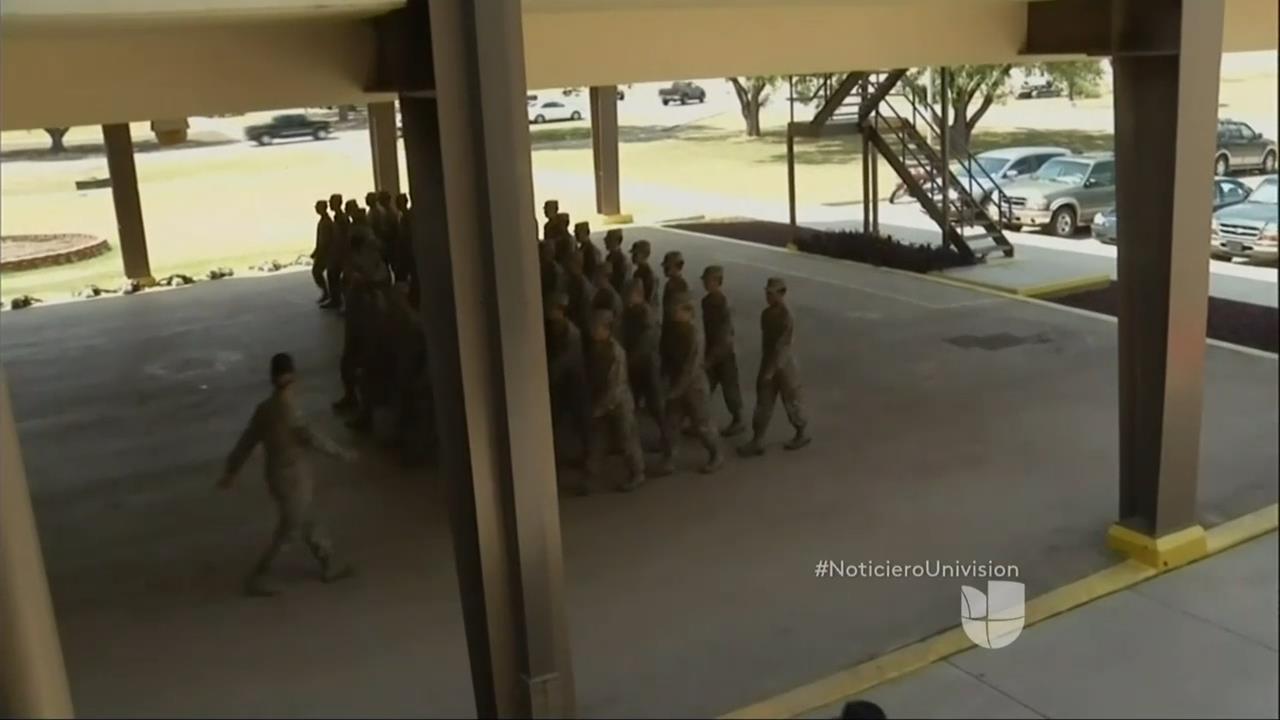 FELICIDAD AVELEYRA, ANCHOR, TELEMUNDO: The armed forces of the United States announced today that they will lift the ban on transsexual persons from joining their ranks. The Secretary of Defense Ashton Carter argued that the armed forces should be able to count on those who are qualified, no matter their sexual orientation. Edgar Muñoz has more.

EDGAR MUÑOZ, CORRESPONDENT, TELEMUNDO: In a historic event in the United States, the prohibition on transsexual persons from serving in the armed forces was lifted.

EDGAR MUÑOZ, CORRESPONDENT, TELEMUNDO: [Translating Ash Carter’s remarks] “With immediate effect, transgender Americans will be able to serve openly, they will not be fired or separated from the rest of the troops,” commented the Secretary of Defense Ash Carter. Josh lives in Los Angeles, and he was in the military as a woman and wrote a book about homosexuals in the armed forces.

EDGAR MUÑOZ, CORRESPONDENT, TELEMUNDO: [Translating Josh Gershick’s remarks] “LGBT people who join the armed forces are patriots and tend to stand out because they are driven to achieve more,” says Josh, who [when he was a woman] was one of the first to train in a male unit. The transgender community in Los Angeles argues that there are more than 2,500 transsexuals in the armed forces.

EDGAR MUÑOZ, CORRESPONDENT, TELEMUNDO: Did they take too long in recognizing [transgender persons]?

LESLIE MONROY, BIENESTAR ORGANIZATION: I think the United States was behind in recognizing it, but they have always been in [the armed forces] and they form part of the front. 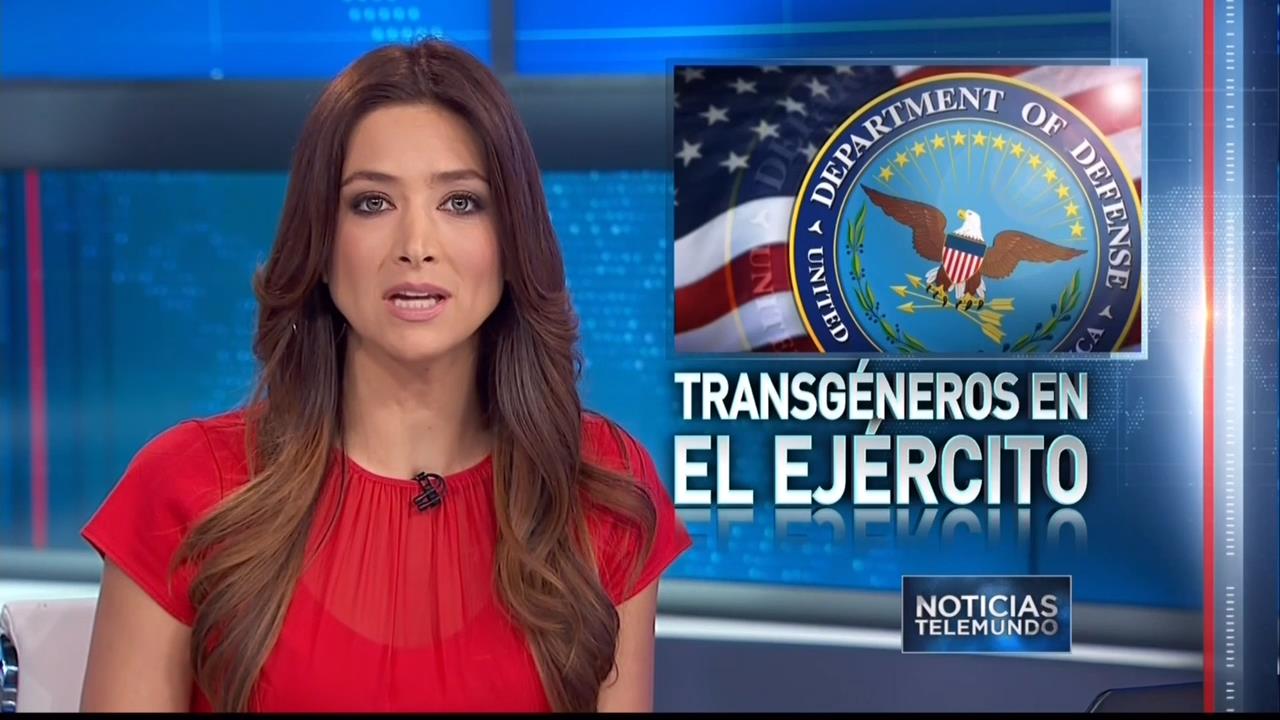 EDGAR MUÑOZ, CORRESPONDENT, TELEMUNDO: This announcement also upset a section of the population, like Mr. Elias, who was a service member in Bolivia for 10 years, and anticipates some incidents and fights among the troops.

ELÍAS SALVATIERRA, EXSOLDIER: It’s a bit bad, but they have to serve their country, right?

EDGAR MUÑOZ, CORRESPONDENT, TELEMUNDO: Why is it bad? Is there going to be conflict?

ELÍAS SALVATIERRA, EXSOLDIER: Yes, there’s going to be conflict, because many times they [other soldiers] try to humiliate you.

JOSH GERSHICK, TRANSGENDER VETERAN: [In English] So what if I can serve openly as a transgender…

EDGAR MUÑOZ, CORRESPONDENT, TELEMUNDO: Josh adds that the biggest achievement for this community in the armed forces is to motivate young people to enlist in the military with the gender that they identify with.

EDGAR MUÑOZ, CORRESPONDENT, TELEMUNDO: Starting in October, members of the armed forces that identify as transsexual will have the right to have a sexual reassignment surgery, which cost will largely be covered by the Department of Defense.