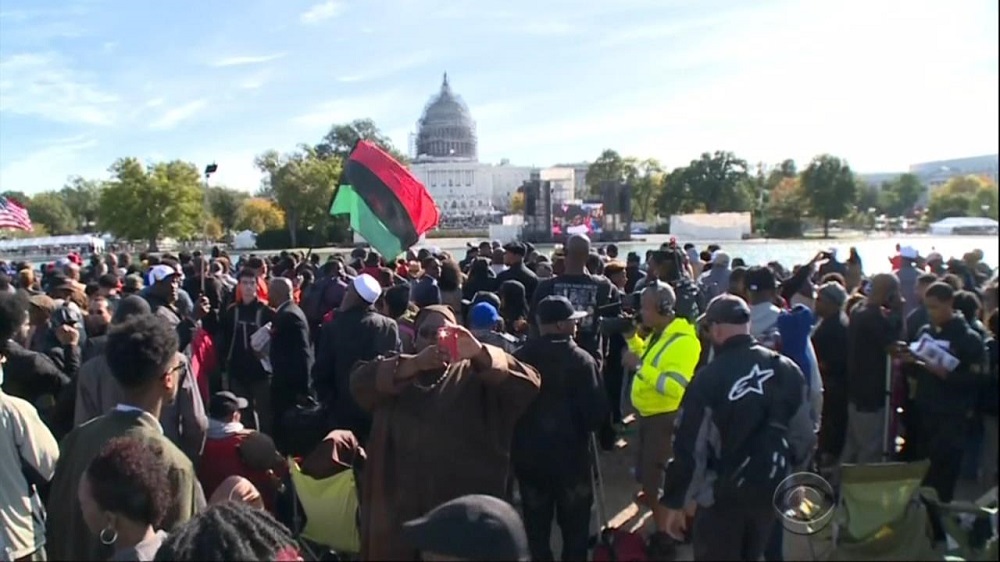 On Sunday, ABC's Good Morning America and CBS's Sunday Morning followed the lead of the New York Times in omitting the extremist history of Louis Farrakhan in their coverage of the "Justice or Else" rally marking the 20h anniversary of the Million Man March. The Big Three programs also failed to mention that former pastor to then-Senator Barack Obama, Rev. Jeremiah Wright, spoke at the event and claimed that "Jesus was a Palestinian" during his speech.

RON CLAIBORNE: Thousands of people packing the National Mall in Washington, D.C. on Saturday for the 20th anniversary of the Million Man March. Demonstrators calling for changes in policing in black communities. Among those speaking: Nation of Islam leader Louis Farrakhan, who helped organize the original march in 1995. An estimated 800,000-plus African-American men took part in that historic event.

The Hill's Bradford Richardson reported on Saturday that Rev. Wright "compared Native Americans to Palestinians at the 20th anniversary of the Million Man March on the National Mall on Saturday, going so far as to assert that 'Jesus was a Palestinian.'" Richardson cited how the United Church of Christ minister contended that "African-Americans in the United States have much in common with Palestinians in Israel. 'The youth in Ferguson and the youth in Palestine have united together to remind us that the dots need to be connected,' Wright said.....Wright...also accused Israel of being an apartheid state."

MARTIN SAVIDGE: Checking top stories now: crowds gathering in Washington today to commemorate the 20th anniversary of the Million Man March. The Nation of Islam minister Louis Farrakhan called for the original march as a day of healing for the black community. That was in 1995. Farrakhan is again calling for the mass gathering – this time with a theme of – quote, 'Justice or Else.' Trayvon Martin's mother among those attending.