Following President Obama’s comments at the G-7 summit on Monday about the United States still having “no complete strategy” for fighting ISIS, NBC Nightly News went to work in spinning for the President by touting his reasoning and neglecting to mention that he uttered similar remarks back on August 28, 2014.

Interim anchor Lester Holt lamented at the top of the segment that it “is often the case at gatherings of world leaders” that “some of the most memorable moments” take place “on the sidelines” while Obama was trying to use “his trip to the G-7 summit in Germany to reaffirm the U.S. commitment to fighting ISIS.”

Jansing declared that while “[i]t looked like a snub,” the “looks were deceiving” as al-Abadi still received a meeting with Obama plus “a promise of more help to defeat surprisingly resilient ISIS fighters.”

Concerning Obama’s remarks about the U.S. strategy for defeating ISIS, Jansing didn’t hesitate to favorably spin the President’s words: “The President ordering up a new plan from the Pentagon to accelerate training and equipping and training Iraqi forces. A shift in U.S. strategy that the President admits is still a work in progress.”

Moments later, Jansing touted the now-famous photo of Obama with “an expressive German Chancellor Angela Merkel” that has drawn comparisons to Julie Andrews in The Sound of Music that Jansing hailed as “another famous image amid the alpine splendor.”

In contrast, ABC and CBS noted the similarity in Obama’s remarks on Monday and in August with multiple doses of criticism for the commander-in-chief. On the CBS Evening News, fill-in anchor Charlie Rose described what Obama said as “a startling admission about the war against ISIS.”

Chief White House correspondent Major Garrett made no attempt to excuse Obama for not noticing al-Abadi, who Garrett described as eventually having “walked away in frustration.”

On ISIS, Garrett added that President “blamed the flow of foreign fighters into ISIS ranks and poor morale among Iraqi troops” for not seeing success in fighting the terrorist group come to fruition. Garrett closed his report by citing action among Republicans: “Republicans said these difficulties are hardly new and the real problem is the absence of a strategy.”

While it was the shortest segment of the three networks, ABC’s World News Tonight also offered criticism of Obama on his ISIS comments. Anchor David Muir observed that Obama “rais[ed] eyebrows [in] seeming to say America does not have a “complete strategy” for defeating ISIS.”

Chief foreign correspondent Terry Moran did cover the context in which Obama made his point, but still dubbed it to be “an amazing admission from President Obama.”

In the time that was left in the 47-second report, Moran continued his skeptical take on Obama’s plans to stop ISIS: “He said the same thing last August, we have no strategy and now, it's been ten months since he sent American forces back into action in Iraq and today, he says the same thing: There is no strategy to win.”

The transcript of the segment from June 8's NBC Nightly News can be found below. 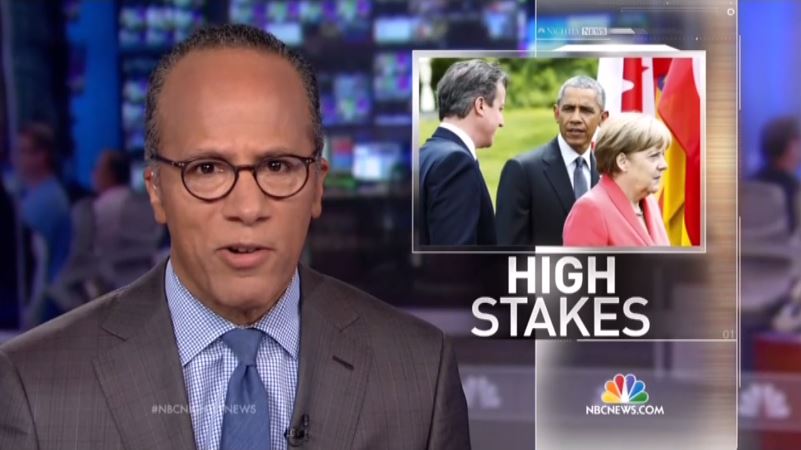 LESTER HOLT: President Obama used his trip to the G-7 summit in Germany to reaffirm the U.S. commitment to fighting ISIS, but is often the case at gatherings of world leaders, some of the most memorable moments happened on the sidelines. Our chief White House correspondent Chris Jansing explains.

CHRIS JANSING: He looked like the ultimate outsider trying to make his way in. Iraqi Prime Minister Haider al-Abadi eager to get President Obama's attention. Sitting, standing, hovering. It looked like a snub, but looks were deceiving. Abadi got what he came for, a promise of more help to defeat surprisingly resilient ISIS fighters.

PRESIDENT BARACK OBAMA: They're nimble and they're aggressive and they’re opportunistic.

JANSING: The President ordering up a new plan from the Pentagon to accelerate training and equipping and training Iraqi forces. A shift in U.S. strategy that the President admits is still a work in progress.

OBAMA: We don't yet have a complete strategy because it requires commitments on the part of the Iraqis as well. 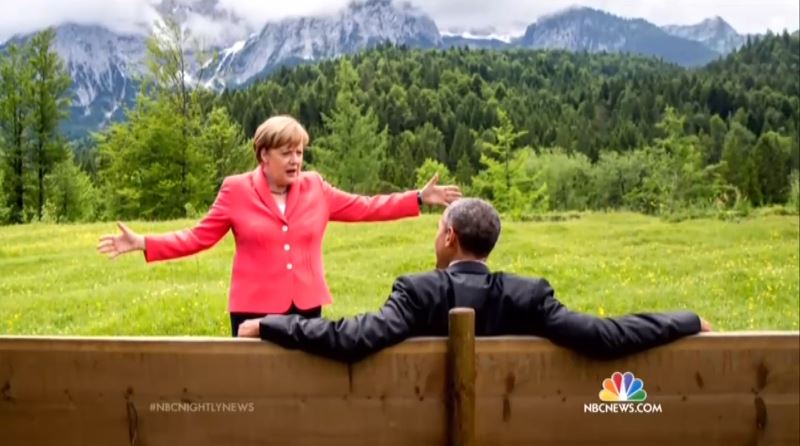 JANSING: While Abadi got what he wanted on another pressing issue, so did President Obama. The leaders declared a united front against Russia for its continuing aggression in Ukraine and while that is the news of the day, this is the photo. The President and an expressive German Chancellor Angela Merkel.

“MARIA” [PLAYED BY JULIE ANDREWS IN SOUND OF MUSIC]: The hills are alive –