In their coverage of desertion charges filed against U.S. Army Sergeant Bowe Bergdahl, the major broadcast networks on Wednesday night failed to mention that National Security Advisor Susan Rice had praised Bergdahl for serving “with honor and distinction.”

Standing in sharp contrast to this glaring omission by the “big three” of ABC, CBS, and NBC, the clip of Rice’s claim on the June 1, 2014 broadcast of ABC’s This Week was shown on numerous cable news shows, including CNN’s The Situation Room and Erin Burnett OutFront as well as FNC’s Special Report and On the Record with Greta Van Susteren.

While discussing the prisoner swap on ABC’s Sunday morning political talk show on June 1, Rice said this to host George Stephanopoulos when asked about the possibility of Bergdahl facing any discipline for leaving his post:

That is really not the point. The point is that he’s back. He’s going to be safely reunited with his family. He served the United States with honor and distinction and we'll have the opportunity, eventually, to learn what has transpired in the past years, but what's most important now is his health and well-being. That he has the opportunity to recover in peace and security and be reunited with his family, which is why this is such a joyous day.

Meanwhile, as for what the networks did mention about this story, all three networks mentioned the “controversial” nature of the prisoner swap with ABC and NBC including soundbites from Bergdahl’s fellow soliders.

On ABC’s World News Tonight, chief foreign affairs correspondent Martha Raddatz reported that “the celebrating was short-lived” upon his arrival in the United States as he “did not want to see his parents, and his fellow soldiers began to go public with their disgust.”

A soundbite from former roommate and retired Army SPC Cody Full followed as Full stated his belief that Bergdahl “knew what he was doing when he deserted us.”

Near the end of the show’s segment, anchor David Muir joined CNN’s Brooke Baldwin in wondering about the length of any possible sentence Bergdahl may receive: “But if Bergdahl is found guilty, Martha, would the Army take into account he was a prisoner of the Taliban all those years?”

Over on the CBS Evening News with Scott Pelley, Pentagon correspondent David Martin’s report featured no clips from those condemning Bergdahl’s actions, but instead allowed a clip of Bergdahl’s attorney to play in which he criticized the entire situation: “The case has been politicalized in the sense that some people in our democracy have seen this case as a way of hammering the President of the United States for any reason and every reason.”

NBC Nightly News not only featured a soundbite from one of Bergdahl’s fellow soliders, but also mentioned the fact that one of the Taliban commanders has since tried to re-engage in terrorism and included a clip from the mother of a solider who died looking for Bergdahl in Afghanistan expressing her disapproval of Bergdahl.

When it came to their coverage when the swap was initially announced on May 31, 2014, the networks spent a whopping 18 minutes and 52 seconds of airtime on their evening newscasts, but devoted only 26 seconds to questions about his conduct as a solider prior to his capture.

The relevant portions of the transcript from ABC’s World News Tonight with David Muir on March 25 are transcribed below. 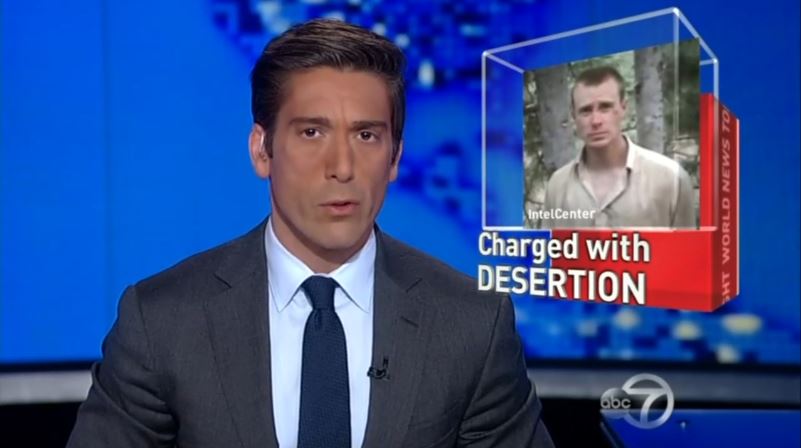 MUIR: But first tonight, the Army Sergeant charged with desertion. Bowe Bergdahl, the U.S. soldier from Idaho held hostage by the Taliban for five years. We saw him blinking in the sunlight, set free in the dramatic exchange. The U.S. handing over five Taliban prisoners to gain his freedom. After the handoff, patted down by a member of U.S. special operations forces before boarding that chopper and flying to freedom, but tonight, that freedom could be short lived. Late today, the U.S. Army revealing the charges that could lead to life in prison.

RADDATZ: Captured when he was freed last year in that dramatic exchange for five Taliban leaders, hollow-eyed and blinking after being held in darkness, he wept with gratitude when told he was heading home and back in the U.S., Bergdahl's parents invited to the White House.

PRESIDENT BARACK OBAMA: He wasn't forgotten by his community in Idaho, or the military, which rallied to support the Bergdahls through thick and thin.

RADDATZ: But the celebrating was short-lived. Bergdahl did not want to see his parents, and his fellow soldiers began to go public with their disgust.

FORMER BERGDAHL ROOMMATE FMR. ARMY SPC CODY FULL: He knew what he was doing when he deserted us. 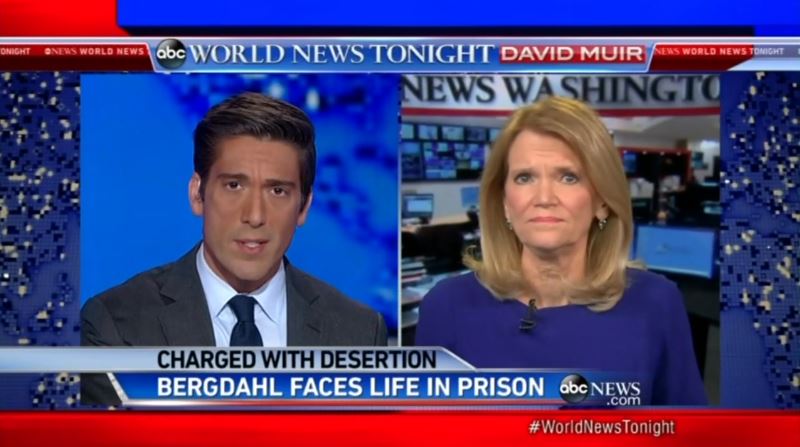 MUIR: We know he faces the possibility of life in prison, but if Bergdahl is found guilty, Martha, would the Army take into account he was a prisoner of the Taliban all those years?

RADDATZ: You know, David, I can't imagine they wouldn't take that into consideration and there’s also, of course, the possibility that it won’t go to trial that they will make some sort of plea deal.

A partial transcript of the segment from March 25's NBC Nightly News can be found below. 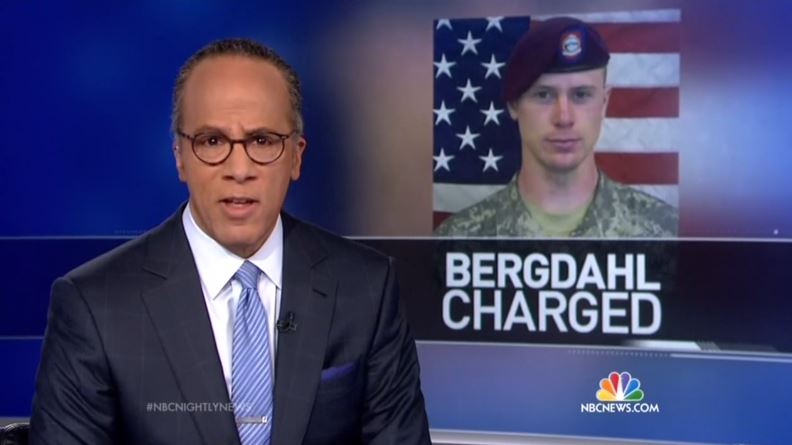 HOLT: Now to another big story here at home that broke this afternoon. It involves Bowe Bergdahl, the U.S. Army Sergeant who vanished from his post in Afghanistan and was then held captive by the Taliban for five years before being rescued in a controversial prisoner swap. Our Pentagon correspondent Jim Miklaszewski was the first to report in January that Bergdahl would be charged with desertion and tonight, those charges are official.

FORMER FELLOW SOLIDER JOSH CORDER: I think he's very lucky they're not talking about squad and death penalty for him.

MIKLASZEWSKI: In May of last year, Bergdahl was released in a controversial prisoner swap. The Obama administration agreed to release five high-valued Taliban prisoners from Guantanamo Bay in exchange for Bergdahl. Later, one of the Taliban prisoners tried to re-engage in the fight in Afghanistan, but was stopped. Upon his release, Bergdahl’s parents appeared in the rose garden with President Obama. Little comfort to Sandra and Andy Andrews, who lost their son Darren in Afghanistan and claim he was killed while searching for Bergdahl.

SONDRA ANDREWS: He’s not a hero. He’s a traitor. You know, he’s a deserter. He left his post in war.