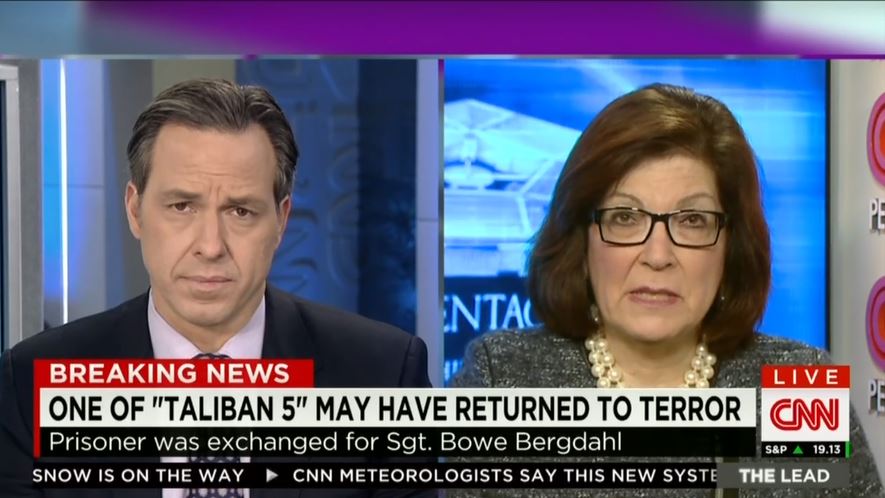 On Thursday night, the major broadcast networks declined to cover reports that one of the five Taliban detainees swapped for Army Sgt. Bowe Bergdahl in May 2014 has been seeking to rejoin the terrorism ranks by contacting Taliban members back in Afghanistan.

The news, which was broken by CNN Thursday afternoon, came following reports on Wednesday from Fox News and NBC News that the Army could be pressing desertion charges against Bergdahl for leaving his post prior to his capture in 2009. Since that story arose, however, the Pentagon has denied those allegations.

The U.S. military and intelligence community now suspect that one of the five Taliban detainees released from Guantanamo Bay in return for Sgt. Bowe Bergdahl in May of last year has attempted to return to militant activity from his current location in Qatar by making contact with suspected Taliban associates in Afghanistan, multiple officials tell CNN.

The development has led to an ongoing debate inside the administration about whether there is a new threat from this man, and potentially the other four.

This is the first known suggestion that any of the detainees involved in the exchange may be trying to engage again in militant activity.

The officials would not say which of the five men is suspected. But an ongoing U.S. intelligence program to secretly intercept and monitor all of their communications in Qatar turned up evidence in recent months that one of them has "reached out" to try to encourage militant activity, one official said. The official would offer no further details.

Beginning with The Lead with Jake Tapper at 4:00 p.m. Eastern, CNN covered the story on all five of its news programs for the remainder of the day on Thursday (concluding with CNN Tonight at 10:00 p.m. Eastern).

Hours later, the Fox News Channel (FNC) was also able to confirm the story and then reported on it during Special Report with Bret Baier, On the Record with Greta Van Susteren, The Kelly File, and Hannity.

The news that one of the terrorists released for Bergdahl is seeking to rejoin the terrorism ranks wasn’t the only story that the networks ignored on Thursday night. In addition to this story on a former U.S. detainee, the “big three” of ABC, CBS, and NBC ignored mentioning that the Senate passed the Keystone XL oil pipeline on Thursday with a wide bipartisan margin of 62-to-36.