One Year Later: How the Media Spun Ferguson Falsehood 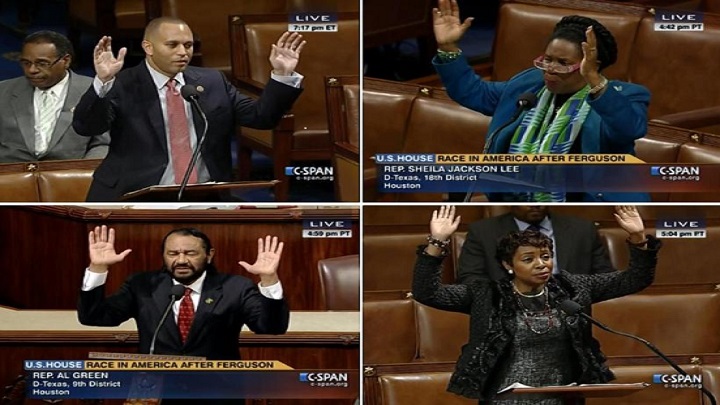 One year ago this Sunday, 18-year-old Michael Brown was shot during a struggle with then police officer Darren Wilson in Ferguson, Missouri. Immediately after Brown was killed, protests and misinformation spread throughout Ferguson and across America, but not without the media’s help. Brown’s friend claimed Brown had his hands up and was facing away from Wilson when Wilson shot and killed him.

“Hands Up, Don’t Shoot” became a common crowd chant, a hashtag, and a national catch-phrase that held no credibility but still was repeated by the media that knew better.

Even after an official investigation and trial cleared Wilson and the DOJ declared the phrase without merit, the news networks continued to use the phrase in their reports. The phrase was shown or mentioned a whopping 157 times in the past year – from Aug. 9, 2014- Aug. 5, 2015 on the morning and evening news shows.

ABC, NBC and CBS used the phrase – mostly B-roll of protesters chanting and pantomiming with hands in the air – an incredible 140 times from the day Brown was shot to the date the Department of Justice report was released, March 4.

And after the DOJ report was released, network journalists continued to use it an additional 17 times from March 4-June 30.

What’s even more troubling is that journalists knew the phrase was discredited but continued to use it, without clarification in their reporting. For instance, on ABC’s Good Morning America March 19, reporter Linsey Davis explained the chant’s Ferguson roots, without telling viewers the phrase was inaccurate. ABC continued avoiding the truth more than a month later in the middle of covering the Baltimore riots, on World News Tonight, April 28. Senior National Correspondent Jim Avila explained that protesters were shouting, “Hands Up, Don’t Shoot,” but made no further comment or clarification. The following night’s broadcast also showed protesters chanting the phrase without comment by Avila.

One Year Later: The Lie Lingers

Despite the justice system clearing Wilson, he now lives with his family as a virtual hermit, hiding away from the public because of the constant death threats.

The media didn’t seem to care that they helped promote and strengthen a culture of hostility and disrespect towards law enforcement. The left’s commitment to an ideology was more important than their commitment to the truth.