Though it’s clear the riots that have gripped Democrat-run cities since the beginning of the summer are the left’s desperate temper tantrum against a president and government system they couldn’t eradicate with Russian collusion allegations and an impeachment show trial, Hollywood is using its propaganda skills to try and shift the blame for the riots on Trump. 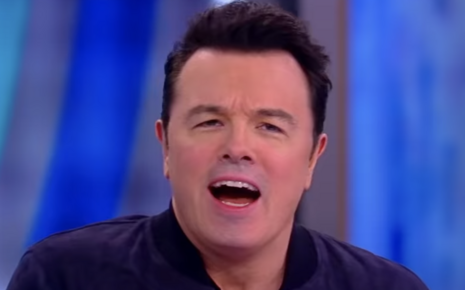 Biden finally decided to speak against the Black Lives Matter riots (of course, they’re finally realizing their base’s behavior is actually bad for their electoral chances) in an August 31 speech, and the Democrat presidential candidate blamed the unrest on President Trump, just on the two-bit reasoning that he’s the one in charge as it’s going on.

Of course, Biden tried to spin it as divisive Trump dividing things, even though, again, this is about his more aggressive and ideologically-possessed leftist base raging against things they haven’t been able to change about America – mainly that Trump is still president. Trump makes these lefties mad, so perhaps in that way, it is his fault.

Several Hollywood morons tried to help Biden do the heavy lifting of that unwieldy argument. Family Guy creator and avowed leftist Seth MacFarlane echoed Biden’s deflection about the left’s violence. He tweeted, “America is in chaos. Which should be no surprise. Any other result of four years of governance by division would be shocking.” Really, though? We think it’s more that the left isn’t getting everything it wants with Trump in the way, thus the tantrum has erupted.

Still, the cartoon creator added, “Americans feel unsafe. Weak, divisive leadership has gotten us where we are now.  Strong, unified leadership will make America safe for all.  #Biden2020.” Sure thing, Seth. Where is the chaos, though? Dem-controlled cities almost exclusively. How about them policies?

Also, isn’t MacFarlane a Bernie bro? Did he forget that Bernie staffers threatened to “burn” cities if Bernie wasn’t the DNC-approved nominee. Seth knows where this chaos really lies.

Batty Bette Midler put up the same BS with her own tweet. After a week where she unfairly attacked the First Lady over her accent and called her an “illegal alien,” Midler tweeted more stupidity, writing, “#Trump keeps talking about violence in #BidensAmerica when all this chaos and violence is happening in #TrumpsAmerica.” Oh, right. Trump is in charge, therefore all the far left anger is on him.

Midler added, “right now. HE, not Joe, is currently President , & has been for 4 years. Why is he blaming #Biden when it’s all happening on his watch? #NotSafeInTrumpsAmerica.” Though Trump’s not the one spreading lies about systemic racism and racist, African American-hunting police.

Alyssa Milano, who’s a useful enough idiot that she’ll even backtrack on her convictions about believing all women to overlook sexual assault allegations against Joe Biden, came to the defense of his senile argument as well. The Charmed actress tweeted, “#BidenCalm is the antidote to #TrumpChaos. Pass it on.”

As always, actress Mia Farrow gave her rotten opinion about Trump inciting the riots. She tweeted a Washington Post editorial, captioning it with “Trump isn’t calling for unity. He’s stoking rage. EVERY ACTION, every gesture and every tweet from President Trump is the opposite of what he would do if he were intent on calming cities now seized by protests and violence.” Oh, by that Farrow means that all Trump has to do is give into leftist demands. Otherwise, he is the cause for violence.

This is a nice game of political extortion we’ve got here, and Hollywood elites have no problem using the American people as collateral.