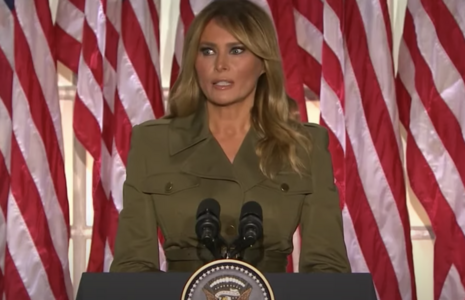 First Lady of the United States Melania Trump headlined the second night of the Republican National Convention on August 25 from the White House Rose Garden and while she was a vision of grace and kindness to normal, mentally healthy viewers, lefty celebrities unleashed  petty rage and savage bullying against her.

Entertainers including Bette Midler, John Cusack and Sarah Silverman mocked Mrs. Trump’s English-speaking ability, engaged in gossip about her being a “call girl” and called her all sorts of horrible names like “illegal alien” “lying asshole complicit pig” and “fucking bitch” just to name a few. It was downright nasty.

Trump-hating comedian Sarah Silverman expressed fury towards the First Lady and her kindhearted White House address, tweeting, “I have to admit Melania is a pretty sexy lying asshole complicit pig.” A “pig?” Wow. Was the comedian attempting a joke there, or is she so consumed with hate for the Trump administration that she could only spit venom? It’s clearly the latter.

Fellow comedian nutcase Kathy Griffin verbally abused the First Lady on Twitter as well, tweeting during the speech, “Seriously, fuck this bitch.” Why? Because Melania talked about the importance of moms teaching children to be responsible online or that racism is horrible? Those are real sensible things to hate someone for, Ms. Griffin.

In addition to calling her a “racist,” “liar” and “enabler,” the always horrible John Cusack mused about Trump being a “call girl” or a “sex worker” at one point in her life in his recent tweet. The washed up actor wrote, “U know if she was a sex worker & who knows the truth about such a thing - that’s NOT what’s wrong  - it’s being a racist -a liar and a criminal enabler of a nazi who put children in cages…  Never forget this ‘model’ was actually a call girl.”

Rapper Cardi B similarly got into the fray when she tweeted, "Didn’t she used to sell that Wap?" ("WAP" is the name of Cardi's latest single and its letters stand for the profane phrase "Wet Ass Pussy") in response to a tweet declaring, "America needs far more women like Melania Trump and far less like Cardi B."

Bette Midler gleefully tweeted several nasty things about Mrs. Trump during her Rose Garden speech. Though the First Lady literally explained her pathway to complete United States citizenship, the idiotic show tunes singer tweeted, “#beBest is back!  A UGE bore!  She can speak several words in a few languages. Get that illegal alien off the stage!”

Midler also called FLOTUS an “awful person” and tweeted that “Melania lacks warmth so severely that I just had to turn my AC down.” Wow, so clever. Midler also resorted to mocking her English again, saying, “Oh, God. She still can’t speak English.” Though, Bette, the First Lady actually speaks six languages, believe it or not.