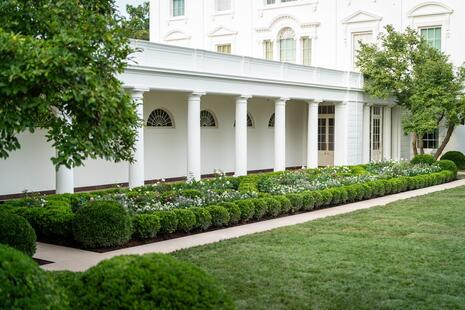 On August 22, Melania Trump’s official Twitter account posted photos of the White House Rose Garden following its first renovation in sixty years. Without breaking a sweat, liberal blue checks on Twitter immediately descended upon the photos to condemn them.

We start with political journalist Jennifer Wright who tweeted out a comparison image reading, “Here is the colorful, happy Rose Garden under Obama, and here is Melania's unveiling of the new garden, entirely devoid of color or joy.” She even followed up the tweet writing, “I'd say that overhauling your garden during a time of national unrest is a real Marie Antoinette move, but to my knowledge Marie Antoinette did not make the garden worse.” 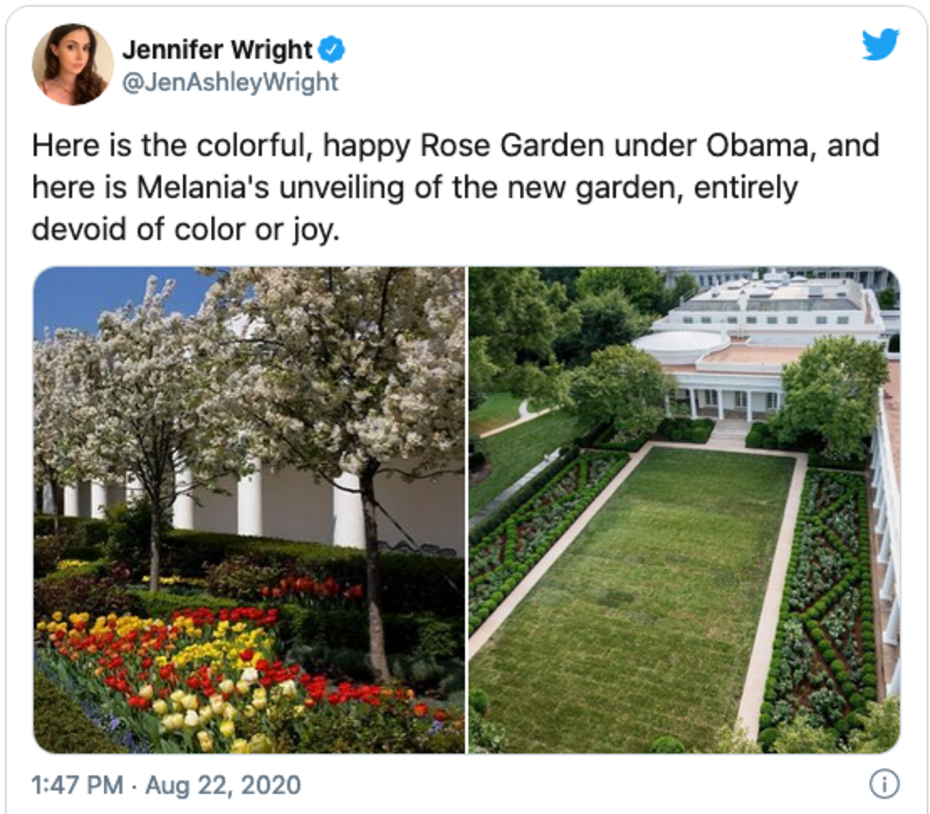 She’s not the only one, either. NBC/MSNBC analyst Howard Fineman tweeted out, “The #Trump family did its best to turn the lovely Rose Garden into a neo-fascist parade ground” in response to the changes.

Former NYT reporter Kurt Eichenwold suffered a full-blown meltdown at the image, tweeting, “It is a destruction of our history, something no other First Lady would have had the gall to do. This is the first time I have been furious that @FLOTUS is a foreigner. She has no right to wreck our history” and "I still find it unbelievable that @FLOTUS who has only been a citizen since the middle of GW Bush's second term had the audacity to wreck the Rose Garden, to pull up history dating back a lifetime. These trashy, evil, stupid people need to get out of our house. What GALL she has" before eventually deleting his tweets and apologizing.

"This woman," CNN hack Ana Navarro ranted. "In March, as Pandemic began, it was a tennis pavilion. Now, as +175,000 -and climbing- American lives and millions of livelihoods have been lost, she unveils new & NOT improved Rose Garden. She cut down Jackie’s trees! I hope @DrBiden returns it to the way it was."

Vox journalist Aaron Rupar tweeted, "Taking out the cherry trees and replacing them with a sidewalk does not seem like an improvement."

Comedian Christopher Titus tweeted, "Our First Lady is a nude model who just destroyed 60 year old cherry trees to make the people’s house look like a small airport in the south."

As per usual, Trump Derangement Syndrome blocks most common sense when it comes to the simplest things. One of them being that tulips, as scene in Wright's “before” photo above, are not in season in late August. Fortunately for them, the Committee for the Preservation of the White House put out a helpful document to explain many of its decisions. Among those include the addition of a concrete path for Americans with disabilities (to Rupar's chagrin) and the movement of the crabapple trees (not cherry trees as many claimed) for a healthier land environment.

Sadly, people reading lengthy documents for the truth is about as likely as the media saying something nice about our president. Instead, we have media pundits and angry leftists alike going so far as to claim the new design is an example of “fascist” leanings with more than one seeing "KKK" written in the bushes.

It’s unfortunately business as usual when it comes to the public’s treatment of FLOTUS. As far as these people are concerned, she will be forever tarnished for the sin of being married to Donald Trump, no matter how many flowers she plants.