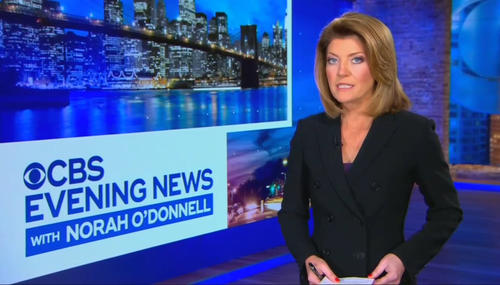 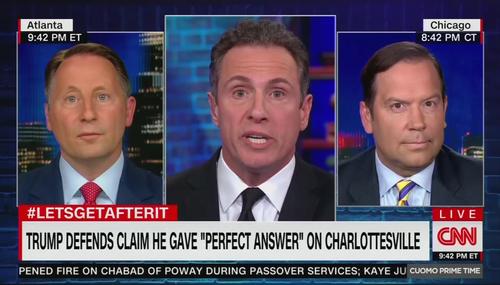 Chris Cuomo Defends Violent Antifa as a 'Good Cause'

Kristine Marsh
April 30th, 2019 12:01 PM
CNN primetime host Chris Cuomo took on President Trump during his Monday evening show, over the President doubling down on his Charlottesville comments and condemning Democrats’ support of late-term abortion. Cuomo expressed shock that Trump would compare abortion to murder, and adamantly defended the leftist anarchist group Antifa, saying they couldn’t be compared to neo-Nazis and… 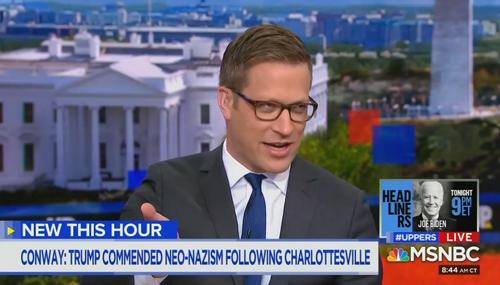 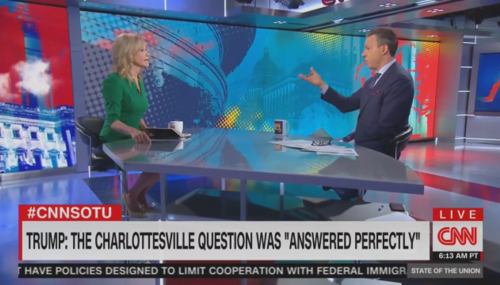 Tapper Snaps at Conway: Your Criticism of MSM 'Beneath You'

Mark Finkelstein
April 28th, 2019 10:33 AM
No fewer than eight times on his State of the Union CNN show today, Jake Tapper asked Kellyanne Conway whether President Trump's response to Charlottesville was, as he has said, perfect. When Tapper wouldn't drop his hair-splitting over "perfect," Conway eventually had enough, and took a shot at the liberal media: "it looks like you, and others, looking at 2020, are… 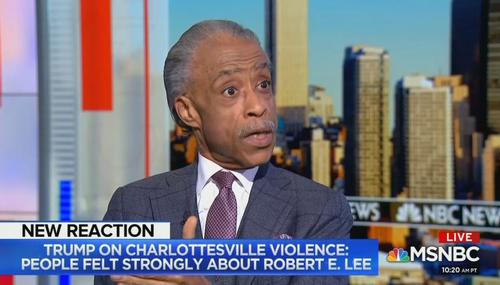 Brad Wilmouth
April 27th, 2019 9:47 PM
As MSNBC host Al Sharpton appeared as a guest on MSNBC Live with Alex Witt on Saturday afternoon to discuss President Donald Trump's recent defense of his Charlottesville comments from 2017, Sharpton and fill-in host Phillip Mena both hinted that President Trump only recently made up the issue of demonstrators having legitimate concerns about statues of General Robert E. Lee even though video… 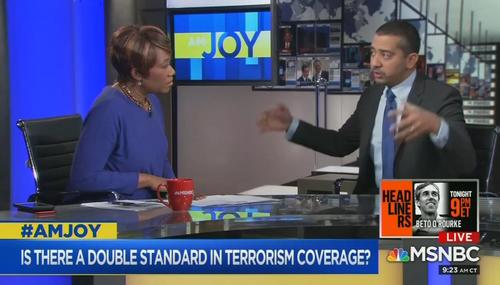 MSNBC Claims 'Terrorist' Is a Word Only Used for Muslims

Brad Wilmouth
March 22nd, 2019 10:13 PM
On Sunday's AM Joy show on MSNBC, host Joy Reid and The Intercept's Mehdi Hasan devoted a segment to fretting that there is a double standard in the treatment of Muslims as compared to whites after a mass shooting. Reid also invoked a debunked claim that white supremacist Dylann Roof was given special treatment after the Charleston massacre, and Hasan cited a misleading study claiming… 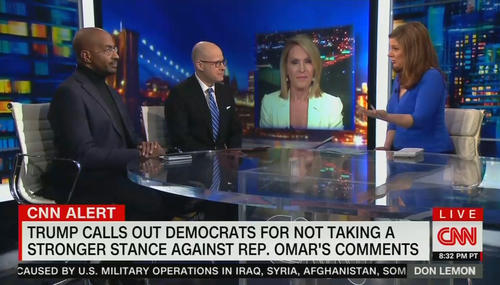 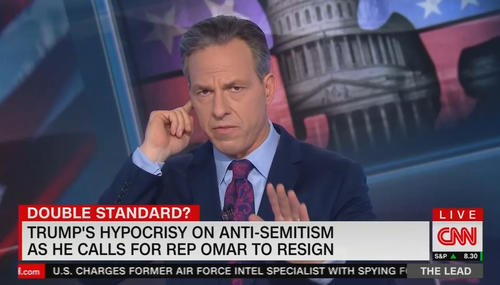 Curtis Houck
February 13th, 2019 8:30 PM
In what was a poorly mangled attempt to be the liberal and unfunny Seth Meyers, CNN’s The Lead host Jake Tapper went on a rant Wednesday in which he pretended to throw fits at his staff for not showing clips and tweets of anti-Semitic Congresswoman Ilhan Omar (D-MN), but instead ones that painted the Trump administration and House Minority Leader Kevin McCarthy (R-CA) as not only hypocrites… 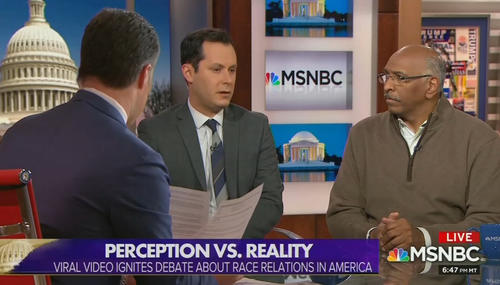 Curtis Houck
January 21st, 2019 5:21 PM
On Sunday’s Kasie DC, the MSNBC panelists did their best to have it both ways when it came to the liberal media-fueled controversy involving the Covington High School students. Over the course of their discussion, they insisted that the story symbolized the need to be careful when jumping to conclusions while plowing ahead by placing the students alongside neo-Nazis, the KKK, and… 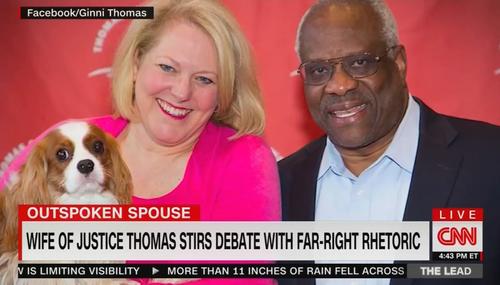 Brad Wilmouth
December 28th, 2018 11:20 PM
On Friday's The Lead on CNN, fill-in host Dana Bash led a discussion of whether Ginni Thomas -- the wife of conservative U.S Supreme Court Justice Clarence Thomas -- is expressing too many "far-right" political views on venues like Facebook. Between Bash's introduction and the setup piece by correspondent Jessica Schneider, her views were referred to as "far-right"… 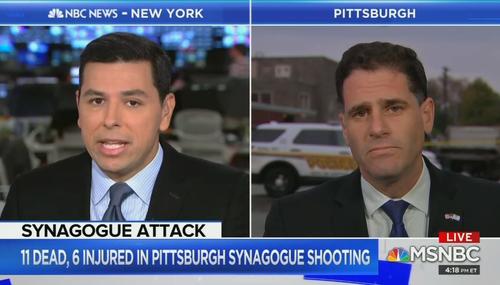 Brad Wilmouth
October 29th, 2018 6:33 AM
On Sunday's MSNBC Live, during a discussion of the Pittsburgh synagogue attack, host Ayman Mohyeldin repeatedly tried to get Israeli Ambassador to the U.S. Ron Dermer to criticize President Donald Trump for allegedly using "dog whistles" that might have encouraged more anti-Semitism. Dermer praised Trump, pointed out that anti-Semitism exists on both the far left and far right… 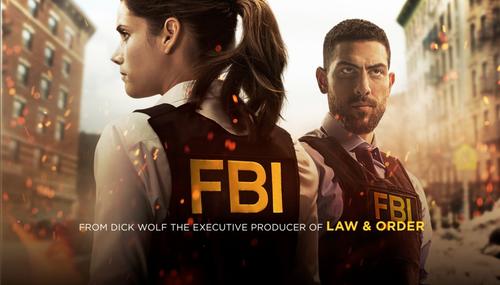 Culture
Rebecca Downs
September 26th, 2018 1:13 AM
Viewers of Dick Wolf’s Law & Order spinoffs knew better than to expect anything original when it came to his new show on CBS, FBI. Sure enough, it didn’t take very long at all for the old tired liberal TV tropes to appear on the September 25 series pilot. 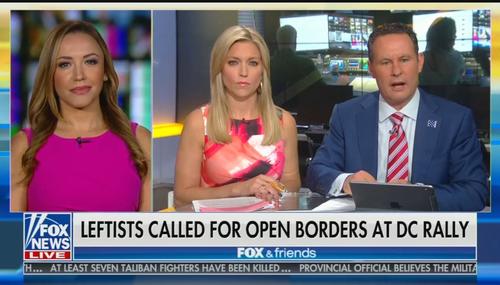 Brad Wilmouth
August 20th, 2018 9:08 PM
In the last couple of days, FNC's Fox and Friends has given attention to the far-left violent group Antifa -- which is sometimes defended by the liberal media -- who have a history of making attacks on not only mainstream conservatives but also on the dominant left-leaning media. 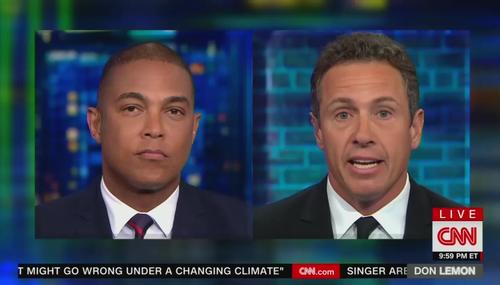 Alec Sears
August 14th, 2018 2:01 PM
On Sunday, Washington, D.C. was all but shut down as roughly 25 white supremacists emerged from whatever crevasses they hide in, and marched to Lafayette Park on the anniversary of last year’s deadly rally in Charlottesville. They were dwarfed by hundreds of counter-protesters, violent agitators, and members of the press. CNN hosts Chris Cuomo and Don Lemon had much to say on the matter.