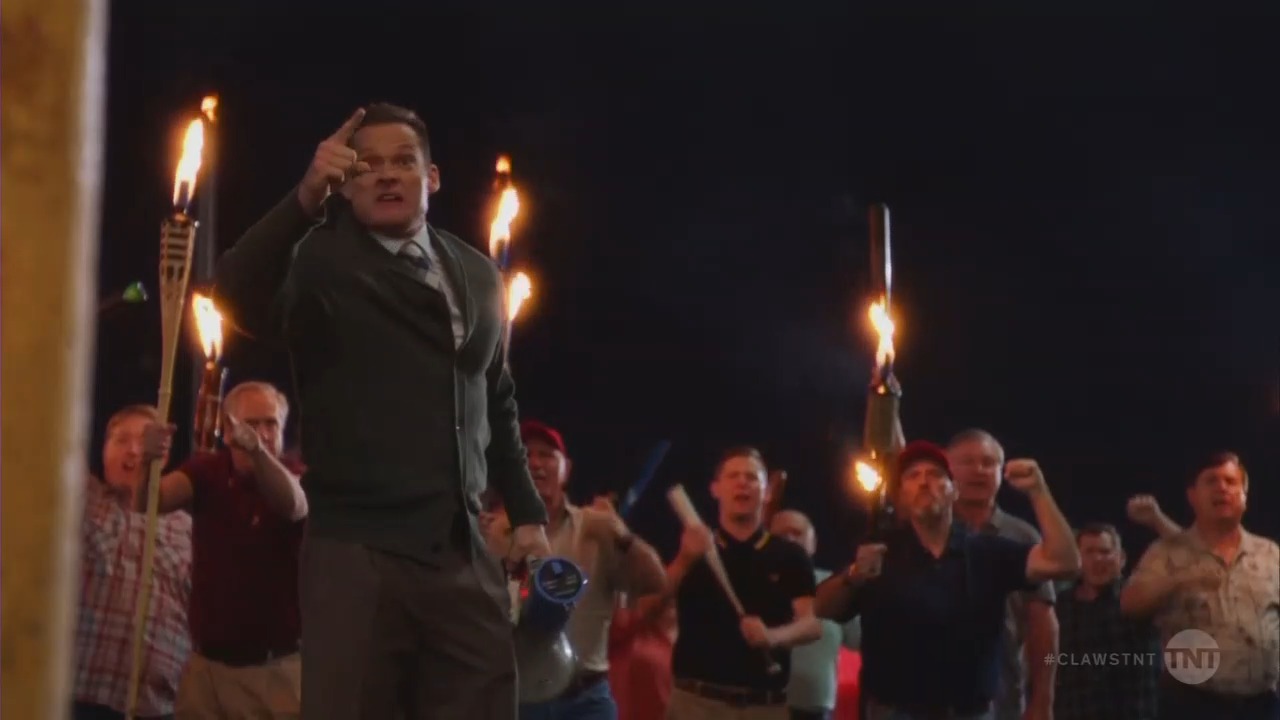 In Trump’s America, liberal Hollywood writers will take any opportunity available to insert some of their favorite narratives into the storylines of television shows. The most popular right now is thinly veiled references to President Trump and his supporters.

In the July 28 episode of TNT’s Claws, titled “What Is Happening to America,” Bryce (Kevin Rankin) is being targeted by a group of white supremacists who have discovered that he and Jennifer (Jenn Lyon) have an African-American child from Jenn’s past relationship with a black athlete. The group tracks him down to a rehab center for drug users that he operates with his father.

The mob is led by Chad Beauregard (Will Koberg). They begin to protest outside the building in a strip mall. The white men carry tiki torches and some wear red MAGA hats in what is clearly a reference to the white supremacist march in Charlottesville, Va.

Chad: Our country is being overrun by rapists, and drug dealers. This strip mall is a perfect example.
Crowd: Yeah!
Chad: This used to be a pharmacy where my granddaddy would take us for ice cream sundaes after church. And there used to be a carousel here in the parking lot where we could ride horses in peace. And now, look around. There's used needles and nappy hair weaves.
Bryce: You know, I -- I always pictured this great country as a place where we could come together and celebrate our differences. You know -- black, white, brown.
Chad: Spoken just like the radical left!
Crowd: Yeah! Get him!
Officer: Alright, everybody. Disband. Show's over.
Crowd: No! –
Officer: Move along. Chad, is that you? Need a ride home?
Chad: What's up, brother? How you doing?

Chad’s family is an old one in town. Later in the episode, a $3 million dollar debt must be paid back to an Asian mobster connected with the casino that Desna (Niecy Nash) now owns. In order to come up with the payment, a plan is hatched to rob Chad’s family of their collection of Civil War memorabilia. While Uncle Daddy (Dean Norris), Melba (Rebecca Creskoff), and Roller (Jack Kesy) distract Chad with a conversation on the veranda, a phony story that three black men are robbing homes in the area, the others rob the house.

During the conversation, Chad invites Uncle Daddy to join an organization his great, great grandfather started. He assures him that there is now a new dress code. No more hoods required, only red hats.

Roller: I mean, it's a shame what -- what's becoming of our neighborhood.

Chad: Not just our neighborhood, our country. I mean, what is happening to America?

Melba: Tell me about it. It's like they're trying to take the country away from us.

Uncle Daddy: I mean, look. Look, I -- I used to be okay with the coloreds and whatnot, you know?

Uncle Daddy: But, uh, shit, I got a lawn jockey in my front yard, you know?

Uncle Daddy: I tell you, if one more of them take a knee, I'ma switch that channel right over to hockey.

Chad: I don't have a problem with black people.

Uncle Daddy: I don't either. -Never have.

Chad: Who does? Come on.

Melba: Listen, we love black people, all of us. Love.

Chad: It made more sense when it was separate but equal.

Melba: Yeah, it did.

Chad: Now everybody's mixin' together, all this multi-culti, biracial. It's confusing.

Roller: Some of them are nice people.

Chad: Sure, sure. But it's not what our founding fathers wanted, I know that much. I tell –

Uncle Daddy: I tell you what. To your point there, like Ben Carson... Mm-hmm. ...Clarence Thomas, those types...

Chad: Oh, yeah, they are the exception.

Virginia: Look at these gorgeous snowflakes. They're coming with me. ...

Chad: You know what? You might be interested in, uh, joining an organization that my great-great-granddaddy founded.

There is nothing subtle anymore in television shows. The left is emboldened to insult conservatives and Trump supporters simply for who they voted for and hold them accountable for anything extremists in the alt right do. Hollywood likes to portray these over-the-top protests and discussions as though it is real life for regular America. It isn’t. It only exists in the minds of those who make up stories for a living.