Slate Writer: Goal of Movement Conservatism Is to ‘Preserve…Dominance of White Americans’

Are black Republicans Sen. Tim Scott and Reps. Mia Love and Will Hurd on the wrong side of the aisle? In a sense, they are, according to Slate’s Jamelle Bouie, who argued in a Sunday piece that the conservatism central to the GOP is “fundamentally at odds with America’s people of color.”

“No matter the temperamental affinities that might exist between some nonwhites and the Republican Party,” wrote Bouie, “attempts to bring them into the fold inevitably run up against a key reality: that movement conservatism—the starve-the-beast, libertarian mode that dominates contemporary Republican politics—is a white ideology. Unresponsive to the particular concerns of nonwhites—around issues of discrimination and racial inequality—it is a drive to preserve a status quo built around the political and economic dominance of white Americans. This is more explicit in the age of Donald Trump, but it’s always been true, from [Barry] Goldwater to the present.” 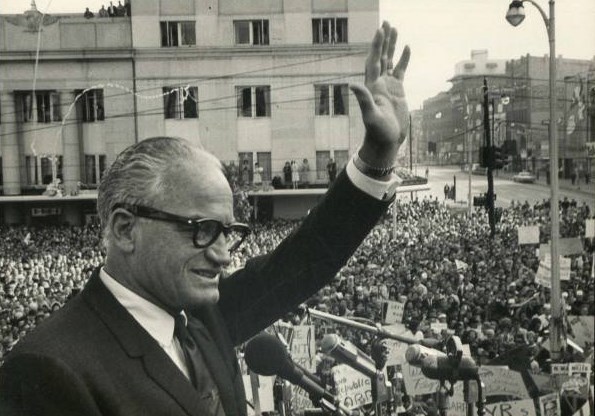 Regarding Goldwater, Bouie stated that he “wasn’t just offensive” to black voters, but that he “articulated a vision of national life that would inevitably leave black Americans on the margins as second-class citizens, subject to the whims of segregationists and their allies. And if Goldwater didn’t see it, his explicitly anti-black allies did.”

Bouie commented that more than fifty years of ideological conservatism has at last resulted in a “lily-white” GOP. He concluded (bolding added):

It’s tempting to say that this GOP won’t survive—that it’s too homogeneous to succeed in a modern, diverse America. But if Donald Trump loses this election, he will likely lose by just a few points. With a nicer suit, steadier hands, and a better attitude, Trump—or at least Trumpism—could succeed nationally.

And for those Republicans who don’t want Trump or Trumpism? It may be too late. The thing about a lily-white Republican Party is that it doesn’t have the diversity it needs to resist white resentment and white rage. Republicans crossed a point of no return. Raw ethnonationalism is their future, even if they don’t want it.