The outcome of the Michael Brown saga in Ferguson, Missouri, which began in August 2014, reached a climax in November 2014 when a grand jury did not indict police officer Darren Wilson, and ended with a whimper in March 2015 when the Justice Department saw no basis for bringing civil rights charges, infuriated the left. So it seemed inevitable that a conspiracy theory would emerge attempting to rehabilitate Brown's reputation while planting doubt about the circumstances leading to his death — and one just has.

Filmmaker Jason Pollock, who is making that attempt, got lots of help from CNN and the New York Times on Sunday.

Pollock's focus is on a 1:13 a.m. overnight encounter on August 9, 2014 at the same convenience store Brown is known to have visited ten hours later. The latter visit is when Brown, as seen in widely distributed video footage, took merchandise, committing a robbery which the store reported to police.

Pollock wants the nation to believe that:

Here is one of two CNN segments from Sunday (the other, which interviews Pollock, is here; transcript is presented within the video):

... "challenges the police narrative that Brown stole from a convenience store moments before he was shot and killed."

... (Brown's second visit 10 hours later) "stemmed from a misunderstanding tied to an earlier apparent drug deal with a clerk."

... "Brown did not return to rob the store later that day, but to get his stuff back."

... "The visit was briefly mentioned in a St. Louis County Police report."

DIANE GALLAGHER, CNN: Now we reached out to the Ferguson Police Department and asked them about the video, and why it wasn't released before. We were told to call back tomorrow when the public information officer would be on duty. We also tried to get in touch with the attorney who represents the Ferguson Market. They haven't gotten back to us just yet; however, he did do an interview with the New York Times. In that interview, he disputes the version of events that appear in the documentary.

The Times story by Mitch Smith really wants people to know that this video is "new":

Thus we're supposed to believe, by extension, that Ferguson Police Officer Darren Wilson, who was aware at the time of his encounter with Brown that he might be the suspect in the earlier robbery, might have acted differently, and that Brown might be alive today if he had. The blame for Wilson being misinformed then goes to the convenience store operators who reported a robbery which really wasn't one.

Concerning the justification for the original encounter — after which Wilson saw evidence connecting Brown to the alleged robbery, there are these points which should be recalled (bolds are mine throughout the rest of this post):

The officer who shot Ferguson teen Michael Brown stopped Brown and another teen because they were walking in the street ...

Jackson told the (St. Louis) Post-Dispatch that the officer, Darren Wilson, saw cigars in Brown’s hand and realized he might be the robber.

"Walking in the street" is certainly enough to justify a stop. What happened from there appears to have primarily been caused by Brown's behavior, not the fact that he was holding cigars in his hand.

A grand jury did not indict Wilson, concluding that Wilson shot Brown in self-defense, and the idea that Brown may have raised his hands at some point during the encounter and said, "Hands up, don't shoot!" — which had been a dishonest leftist rallying cry for months — was debunked.

News of the documentary's content, particularly its attempt to tag the convenience store with a false robbery report, nearly led to violence Sunday night:

Word of the new video drew a group of protesters that grew to about 100 Sunday night. Eventually the market closed, and police cleared the parking lot.

Shortly before midnight, 7 or 8 shots were heard from an area across the street from the market. There appeared to be no injuries. Someone stuffed a rag in the gas tank of a police car, but the damage was minor.

Henry L. Stokes, 45, of the 1500 block of Haviland Drive of Bellefontaine Neighbors, was charged with felony counts of attempting to cause catastrophe and resisting arrest. Bail was set at $25,000.

During the protest, police say Stokes stuffed a napkin in the gas tank opening of a St. Louis County police car and tried to ignite it with a cigarette lighter.

Here's the problem: While the video may not have previously been released to the public, knowledge of Brown's previous visit, and the existence of the video, are not "new" at all, as "Grand Jury evidence shows that Mike Brown was one of a group of three people who went to the Ferguson Liquor Market at 1:13am on the same day as the shooting." Additionally, "The Grand Jury saw CCTV evidence of his visit ..."

Monday, convenience store attorney Jay Kanzler showed the actual 1:13 a.m. video footage which was available, and demonstrated that Pollock had actually engaged in what the press and the left habitually and falsely say James O'Keefe does in his videos — selective editing:

Attorney Jay Kanzler says filmmaker Jason Pollock selectively edited the footage together and them made this wild claim. The video makes much more sense when you see the entire clip. Multiple angles provided by Ferguson Market surveillance cameras make the events of that night much clearer. He says that he owes the city of Ferguson an apology for creating this controversial video.

Kanzler says that the clerks at the Ferguson Market did not exchange goods for marijuana. He says the filmmaker that made the "Stranger Fruit" documentary edited the footage to make it appear that a drug transaction occurred. Kanzler says that did not happen. It is absolutely untrue and the video proves it.

The title of Pollock's documentary, Stranger Fruit, appears to be a slightly modified reference to Strange Fruit, a 1939 song by legendary female vocalist Billie Holliday about lynchings of blacks in the Jim Crow south.

Jason Pollock, who has been caught lynching the truth, is not handling new developments very well. 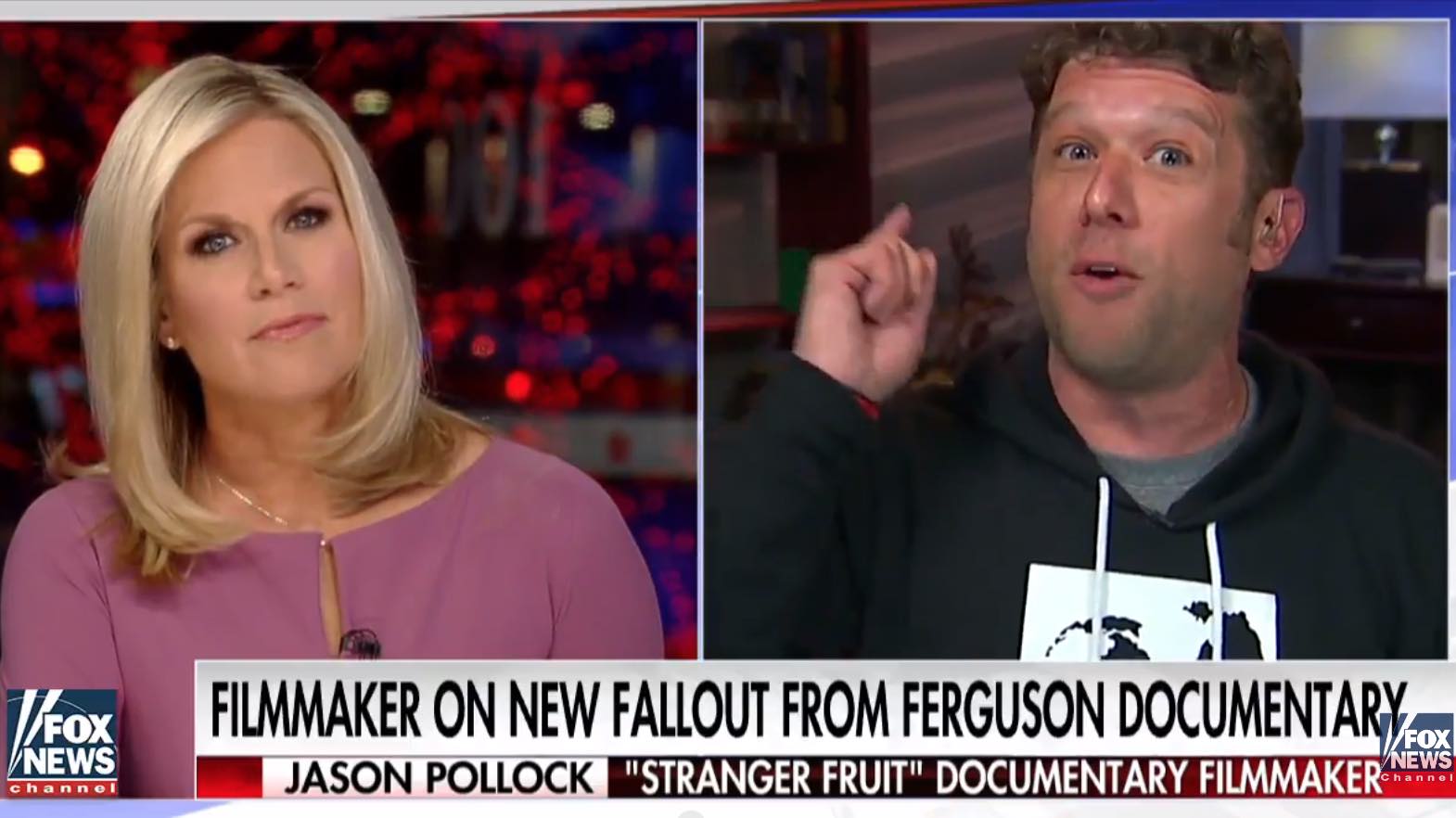 In an interview at Fox News Monday evening (HT Hot Air), when challenged by Martha MacCallum about how many people had looked at all the evidence in the Brown case, and how the Obama Justice Department was arguably predisposed to find Officer Wilson at fault but couldn't, he shouted: "These cops get off every single time!"

MacCallum stood her ground, and Pollock's rudeness and anger became more intense. In the interview's final minute, he went into a frenzied rant, first presenting a series of evidential claims which St. Louis prosecutor Bob McCulloch, in an interview immediately following Pollock's, said were wrong, and were contradicted by three medical examiners who reviewed the related evidence in the case. Then Pollock went further, screaming, "Do you know how many black men are in jail for nothing?" and insisted that "My film will show the public the truth."

As Bob Owens at the Bearing Arms blog wrote on Monday: "(This) recent attempt to resurrect controversy surrounding his (Michael Brown's) death is nothing more or less than the very definition of “fake news." Sadly, CNN, the New York Times, and the Associated Press gave Pollock's narrative 24 hours of oxygen it didn't deserve — and as such, became fake news purveyors themselves, a role in which they have in recent times become all too comfortable.