After unprecedented amounts of new federal spending, ostensibly to deal with the COVID crisis (though huge amounts of these emergency funds somehow found their way to congressional pet projects), the Biden administration is now asking Congress to raise the debt ceiling to prevent the calamity of a federal default.

While the media could use the occasion to slam dangerous unrestrained spending, we know from history that they will instead launch vicious attacks on Republicans who are insisting on reform as a condition for their vote for more debt.

We know this because we’ve seen this movie before. Ten years ago, after the Obama administration instigated massive federal spending to deal with the Great Recession, Republicans insisted on long-term deficit reduction, and the liberal media slammed them as nihilists, hostage-takers, terrorists, suicide bombers and zombie vampires: 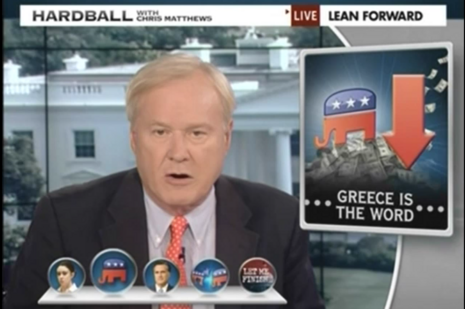 ■ Salon’s Joan Walsh: “These people, the Tea Partiers and their friends and their enablers and their corporate friends like Dick Armey, they have created this shrieking on the right....They’re paying the lowest taxes in 50 years — more than 50 years, more than my lifetime — and they are still complaining. And some of them aren’t complaining. There are some good business people who know this game of chicken, in particular, is deadly and it’s wrong and it’s hostage-taking. And you shouldn’t negotiate with hostage-takers.”
Host Chris Matthews: “I agree with you. I agree with you. I agree. It’s terrorism.”
— MSNBC’s Hardball, July 5, 2011.

■ “If sane Republicans do not stand up to this Hezbollah faction in their midst, the Tea Party will take the GOP on a suicide mission.”
— New York Times columnist Thomas Friedman, July 27, 2011.

■ “You know, the problem with this is it’s like a form of economic terrorism. I imagine these Tea Party guys are, like, strapped with dynamite, standing in the middle of Times Square at rush hour and saying, ‘Either you do it my way, or we’re going to blow you up, ourselves up, and the whole country up with us.’ So you tell me how those kinds of stand-offs end.”
— MSNBC economic analyst Steven Rattner on MSNBC’s Morning Joe, July 29, 2011.

■ “There’s a nihilist caucus which is, ‘Listen, we want to burn the place down.’ I mean, they’re not, they’ve strapped explosives to the Capitol and they think they are immune from it. The Tea Party caucus wants this crisis, and do we want to do this again six months from now?”
— Bloomberg columnist Margaret Carlson on Inside Washington, July 29, 2011.

■ “Some people say that the Republican Party has been held hostage by the Tea Party. One of our Facebook followers sent in an interesting analogy and said, ‘Why are Republicans allowing freshman congressmen to control this debate?’ and this person said, ‘It’s like letting the teenager in the family run the family budget.’ I mean, there’s some truth in that.”
— Moderator Bob Schieffer to GOP Senate Leader Mitch McConnell on Face the Nation, July 31, 2011.

■ “The question, I think, some people might be asking is, do you think that members of the Tea Party caucus know how to govern, or are they — do they understand that standing up for a cause is not the same as governing?”
— Co-host Ann Curry to Tom Brokaw on NBC’s Today, August 1, 2011.

■ “You know what they say: Never negotiate with terrorists. It only encourages them. These last few months, much of the country has watched in horror as the Tea Party Republicans have waged jihad on the American people....For now, the Tea Party Republicans can put aside their suicide vests. But rest assured: They’ll have them on again soon enough.”
— New York Times columnist Joe Nocera, August 2, 2011.

■ “Tea Party budget-slashers....were like cannibals, eating their own party and leaders alive. They were like vampires, draining the country’s reputation, credit rating and compassion. They were like zombies, relentlessly and mindlessly coming back again and again to assault their unnerved victims, Boehner and President Obama. They were like the metallic beasts in Alien flashing mouths of teeth inside other mouths of teeth, bursting out of Boehner’s stomach every time he came to a bouquet of microphones.”
— New York Times columnist Maureen Dowd, August 3, 2011 column.