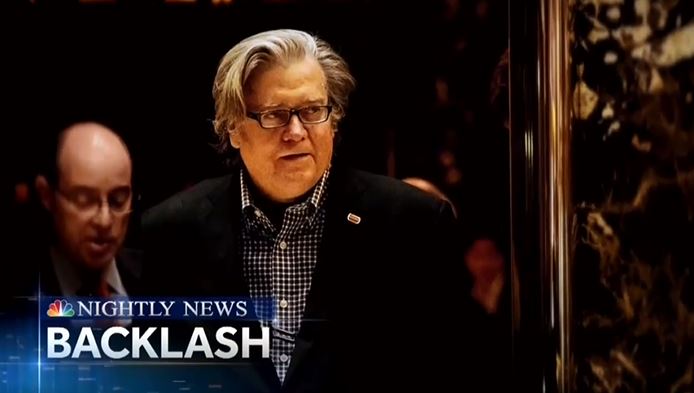 Since Sunday evening, ABC, CBS and NBC (along with a host of other establishment media outlets) have been engaged in a feeding frenzy over Donald Trump’s appointment of Steve Bannon, with reporters relentlessly employing phrases such as “white nationalist,” “white supremacist,” “extremist,” “racist” and “anti-Semitic” to solidify the image of Bannon as a dangerous pick for a top White House position.

But since Friday, those same networks have been blind to the controversies surrounding the top candidate for Democratic National Committee Chairman, Rep. Keith Ellison. Ellison has been accused of ties to the radical Nation of Islam, the Muslim Brotherhood, and once suggested the 9/11 terrorist attacks were akin to the infamous Reichstag fire used to propel Hitler’s Nazi party into absolute power in 1933 Germany.

From Sunday night through Wednesday morning, MRC analysts found the Big Three had already churned out 41 minutes, 46 seconds of coverage devoted to Bannon’s appointment. An analysis finds that nearly three-fourths (74%) of all references to Bannon were negative; the only positive comments viewers heard came from interviews or soundbites with other Trump campaign officials or Republican officeholders.

Reporters threw everything at Bannon, including the kitchen sink. On ABC’s World News Tonight on Monday, correspondent Tom Llamas labeled him “a champion of the alt-right, a conservative movement many say is fueled by racism, sexism and anti-Semitism.” NBC anchor Lester Holt said Trump was “lifting a man with ties to white nationalists into the heart of the White House.”

On the CBS Evening News, reporter Chip Reid told viewers about long-dropped charges of “domestic violence,” and unsubstantiated accusations from Bannon’s ex-wife that he didn’t want his children “going to school with Jews.”

The coverage has been so ridiculously excessive, The Daily Wire’s Ben Shapiro — who dislikes Bannon — said it was evidence the media had “gone nuts” over the appointment:

They claim that he’s personally anti-Semitic and racist and a white nationalist and anti-Israel, without evidence. This is ridiculous. And all it does is provoke defense from the right. For God’s sake, I’m now defending Steve Bannon! The media can’t stop their overreach, because everybody on the right is Hitler to the media, which means that Bannon must be Super-Duper-Hitler. [italics in original.]

Contrast that with news coverage of a Democrat accused of radicalism. Since he was first mentioned as a potential candidate on Friday, Rep. Ellison’s bid to take over the DNC has received only two minutes, nine seconds of network airtime, and none of it has focused on his controversial comments or associations.

The only spin network viewers heard was positive. On NBC’s Today show on Sunday, MSNBC’s Joy Reid was brought on to sing his praises: “Keith Ellison as a young legislator, as a Muslim, as an African-American, he really feels like sort of an ideal candidate.”

Ellison has been endorsed by incoming Senate Democratic Leader Charles Schumer, a move which has led to protests against the New York Senator. While CBS has not mentioned those protests, their New York affiliate has done the reporting:

On a trip to Israel last summer, Ellison posted a photo of a sign in Hebron declaring Israel to be an apartheid state. He also proudly defended Nation of Islam leader Louis Farrakhan against accusations of being anti-Semitic.

“(H)is vile beliefs… ought to disqualify him outright,” said Joel Mowbray, a consultant to Jewish groups. “If Chuck Schumer actually did his due diligence and is supporting Ellison anyway, that’s shameful.”

FoxNews.com explained that “in 2007, Ellison made a comparison between Bush and 9/11 to Hitler and the 1933 Reichstag fire.”

“‘9/11 is the juggernaut in American history and it allows... it’s almost like, you know, the Reichstag fire,’ Ellison said, according to a Daily Telegraph report at the time. ‘After the Reichstag was burned, they blamed the Communists for it, and it put the leader of that country [Hitler] in a position where he could basically have authority to do whatever he wanted.’”

Longtime terrorism expert Steve Emerson in 2010 documented that Ellison had financial “donors with a history of Muslim Brotherhood connections.” And in  March 2010, according to Emerson, “Ellison attended a private fundraiser at the northern Virginia home of a man who led a group tied to the Muslim Brotherhood.”

Add it all up, and Ellison sounds at least as controversial as Bannon. So, if charges of extremism against a potential Republican White House aide are worth massive network coverage, where is the similar coverage of the radical ties of a Congressman who hopes to lead the Democratic Party?