Do Something Then? Cuomo, NBC Huff Media Not Covering Missing Minorities 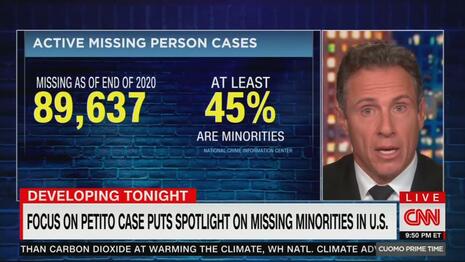 The search-turned-murder investigation of Gabby Patito was tragic, but it showed how people can come together to help solve a mystery. But it also provided an opportunity for those looking to divide to drive a wedge. That appeared to be the mission both CNN’s Chris Cuomo and NBC Nightly News were on Thursday when they complained that the media wasn’t giving enough airtime to cases where minorities had gone missing and asserted the public didn’t care enough.

If only they had massive international platforms to be the change they wanted!

Cuomo got off to an early start with his hallow analysis as he tweeted platitudes about how people needed to do better. He even tweeted out about other missing people and dared people to get involved as if they didn’t care otherwise.

“Let's see if the attention on #gabbypetito and the concern about neglect of others who are missing can generate sustained interest in finding folks. Another family is desperate. Will you take up the cause,” he declared over an image of missing Native American Reatha May Finkbonner.

“Talking about the problem is good. Doing something about it is better. Who in media will step up,” he posed in another.

In a spat of tweets responding to people calling out how neither he nor CNN had given airtime to these missing person cases, Cuomo lashed out at viewers by blaming them for not showing an interest:

Let's see if the attention on #gabbypetito and the concern about neglect of others who are missing can generate sustained interest in finding folks. Another family is desperate. Will you take up the cause? pic.twitter.com/12XEys0wDq

Will you be as interested? Let's watch tonight and see. There are other families desperate for answers. We hate with gusto on here...can we help as well? https://t.co/ueBRa8j0dz

Just heard about it. There is no question there are many people missing, many families desperate for answers. Let's see if #Petito case is a catalyst to interest in others. https://t.co/DrLtMiCZwj

There were a few ridiculous points in Cuomo’s argument. On one hand, he tacitly admitted that CNN was chasing ratings and wasn’t going to cover the stuff he said mattered. On the other hand, CNN’s ratings were in the toilet which meant they weren’t actually covering what interested people anyway, so maybe they should start covering more of those cases.

And that’s all driven by the fact that THEY (the media) control what they talk about on their shows and networks, and what shows up on their networks can drive what interests the public. Now, Cuomo did speak with David Robinson on his show later that night to shed light on the mysterious disappearance of his son Daniel, so only time will tell if he would continue to report on missing minorities.

CNN did publish an article on their website continuing this effort to inject race into the search for missing people, and essentially hinted that Patito benefited from white privilege (Click “expand”):

Robinson said he sympathizes with the family of Gabby Petito, whose remains were recovered Sunday after she disappeared while exploring parks in Wyoming prompting a highly publicized search.

Still, Robinson said it's "hurtful" to see a young White woman's case met with more urgency and national attention than his son, who is Black.

Robinson is among the Black and brown families whose loved ones remain missing and say they have struggled to get fair attention on their cases. Some say they have grown frustrated with watching the search for missing White women like Petito be in the spotlight, while police appear to allow their cases to go cold or classify their loved one as a "runaway."

“Some experts say the nation faces ‘Missing White Women Syndrome,’ which is defined by the heavier media attention White women and girls receive when they go missing compared to anyone outside of those demographics,” they added.

It was a similar narrative on NBC, where anchor Lester Holt lamented: “The intense and heavily followed effort to find Gabby Petito invites a sharp contrast. The families of so many of those missing in this country, many people of color feel forgotten.”

“As Gabby Petito's case grips the nation, families of color with missing loved ones remind the nation they're hurting too,” suggested NBC correspondent Antonia Hylton. “In 2020, more than 500,000 people were reported missing. Nearly 40 percent of them, people of color.”

That’s a massive number of missing people and NBC only reported a fraction of a fraction of them. Perhaps they can start with themselves.

This gross injection of race into the murder case of Gabby Patito was made possible because of lucrative sponsorships from UPS on CNN’s Cuomo Prime Time and Ensure on NBC. Their contact information is linked so you can tell them about the biased news they fund.

The relevant portion of the transcript is below, click "expand" to read:

LESTER HOLT: The intense and heavily followed effort to find Gabby Petito invites a sharp contrast. The families of so many of those missing in this country, many people of color feel forgotten. Antonia Hylton has that story.

ANTONIA HYLTON: As Gabby Petito's case grips the nation, families of color with missing loved ones remind the nation they're hurting too.

DAVID ROBINSON II: The first 24 to 48 hours is the most important and is critical.

HYLTON: David Robinson's son Daniel is a 24-year-old geologist who disappeared after work one day this past July in Buckeye, Arizona. Police found his car in a ravine, but three months have passed. No sign of him or his body. Why do you they that is? That cases like your son's go unheard.

ROBINSON: As much as I really hate to say this, sometimes I think race is a factor. [Transition] They may think that it is not an urgency for us.

HYLTON: David had to hire his own private investigator.