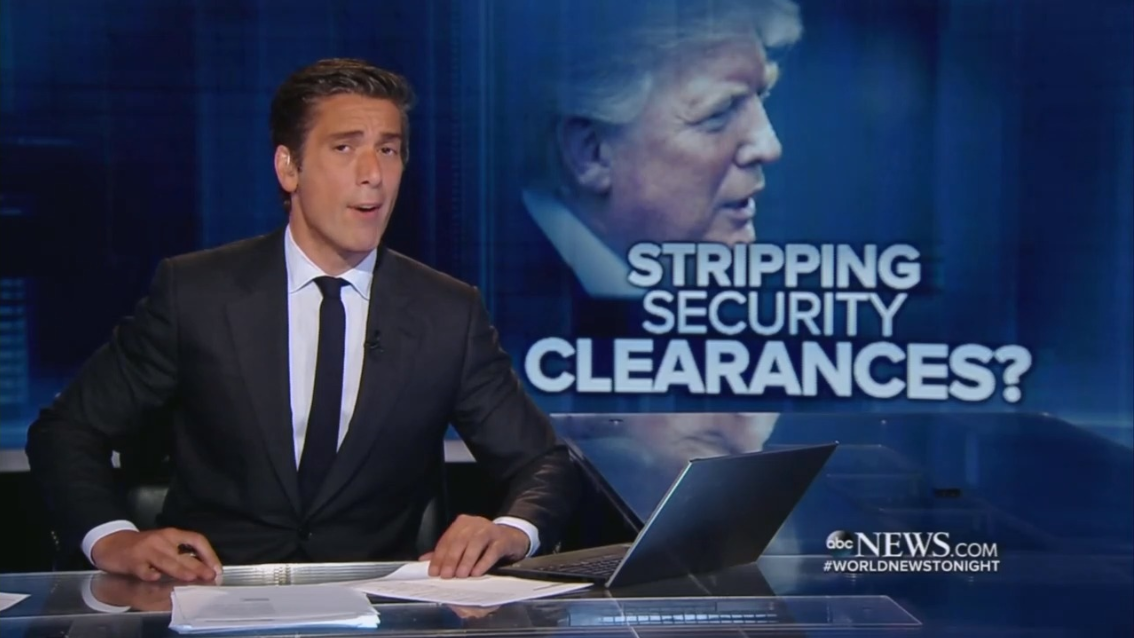 Liberal ABC and NBC journalists were in a full-blown meltdown Monday night after the White House announced the President was looking to revoke the security clearances of six former intelligence officials, whom they contend abused the privilege of retaining it after their tenure. They even tried to pretend most of the officials named weren't Obama appointees.

“The White House tonight is taking aim at several top-level national security officials who have been publicly critical of the President. Threatening to yank their security clearances,” warned NBC Nightly News anchor Lester Holt as he kicked off the program. “Stripping them of clearances, however, could be seen as an act of political retaliation by the President against his critics.”

NBC chief White House correspondent Hallie Jackson, who described the White House’s actions as “Nixonian,” actually tried to downplay their connection to Obama. She argued that “most of the officials worked for both Democrats and Republicans…” ABC and NBC did note that Rice was appointed by Obama.

By contrast, CBS Evening News anchor Jeff Glor had the integrity to distinguish most of the former officials in question as Obama's. “The White House says the President is looking into revoking the security clearances of a number of former national security officials who served during the Obama-era,” he clarified ahead of the report.

“A security clearance is also very valuable for former officials in a private sector. And so, to lose one could amount in a financial penalty,” he explained to Jackson. It’s worth noting that many of the people cited by the White House exploited their clearance for media gigs. They've also been alleged have to served as anonymous sources for many media outlets.

In addition, the talking heads on ABC’s World News Tonight worried about the possibility that President Obama’s and Vice President Joe Biden’s security clearances might be next on the chopping block.

“And what the White House then said when asked if former President Obama and Vice President Joe Biden could be next,” sensationalist anchor David Muir teased during the lead into the report. ABC chief foreign correspondent Terry Moran played a clip of a reporter asking Press Secretary Sarah Huckabee Sanders about that possibility:

UNIDENTIFIED REPORTER: What about President Obama and Vice President Biden and their security clearances? Are they on the list, as well?

SANDERS: I'm not aware of any plans for that at this point.

Moran also pushed a ridiculous liberal media narrative that the President was looking to silence his critics because he “doesn’t like” their “free speech” “and he wants to punish them for it.” But according to NBC, Hayden put out a statement declaring the pulling of his clearance “won't have any effect on what I say or write.”

The hyperventilating tone on the Monday evening broadcasts was particularly conspicuous in light of the tangible benefits that the networks would enjoy from these security clerances staying in place. NBC even admitted as much.

DAVID MUIR: Good evening. And it's great to have you with us here on this Monday night. And we have several stories we're following just as we come on the air tonight. We're going to begin with the President and that unprecedented warning shot, that threat to strip security clearances from several former high-ranking officials in the CIA, the FBI and U.S. intelligence. Among them, former CIA director John Brennan, former FBI Director James Comey and four former top national security and intelligence officials. Sarah Sanders today reading from a carefully scripted statement. Our Terry Moran then asking the White House, is the president threatening to punish these figures because they have been critical of the president? And what the White House then said when asked if former President Obama and Vice President Joe Biden could be next. ABC's Terry Moran leading us off from the White House.

TERRY MORAN: An unprecedented threat from the White House podium, Press Secretary Sarah Sanders reading from a prepared statement, announcing that President Trump was preparing to strip security clearances from some of the fiercest critics of his approach to Russia.

MORAN: Brennan has even seemed to hint darkly that he knows secrets harmful to Trump, tweeting in March, "When the full extent of your venality, moral turpitude, and political corruption becomes known, you will take your rightful place as a disgraced demagogue in the dust bin of history." All this enrages Trump. The president is threatening to punish Brennan and Comey and Clapper for saying things about him that he doesn't like. Is that presidential?

SARAH HUCKABEE SANDERS: They've politicized and, in some cases, actually monetized that are public service and their security clearances. And making baseless accusations of improper contact with Russia or being influenced with Russia against the president is extremely inappropriate. When we have further updates on that front, I'll let you know.

MORAN: So their free speech he doesn't like, and he wants to punish them for it.

SANDERS: Ah, no, I think you're creating your own story. The President doesn't like the fact that people are politicizing agencies and departments that are specifically meant to not be political.

MORAN: Two of the people on the president's list, Comey and his former deputy Andrew McCabe, already lost their clearances a while ago. Sanders was then asked, who's next?

UNIDENTIFIED REPORTER: What about President Obama and Vice President Biden and their security clearances? Are they on the list, as well?

SANDERS: I'm not aware of any plans for that at this point.

LESTER HOLT: Good evening and thank you for joining us. The White House tonight is taking aim at several top level national security officials who have been publicly critical of the President. Threatening to yank their security clearances. The list includes former CIA director John Brennan who minced no words in his criticism of President Trump at the Helsinki summit. The White House accusing Brennan and five others politicizing their high-level security access. Stripping them of clearances, however, could be seen as an act of political retaliation by the President against his critics. Our chief White House correspondent Hallie Jackson has details.

HALLIE JACKSON: It's an unprecedented threat aimed at some critics of the commander in chiefs. The White House considering stripping the security clearances of six former intelligence officials.

SARAH HUCKABEE SANDERS: They politicized and in some cases monetized their public service and security clearances.

JACKSON: Most of the officials worked for both Democrats and Republicans and have been tough on President Trump publicly. Isn't the President doing exactly what you said the President doesn't want all these people doing?

SANDERS: No, the President is not making baseless accusations of improper contact with a foreign government and accusing the president of the United States of treasonous activity.

JACKSON: That may be a reference to John Brennan, former CIA director and NBC News senior national security and intelligence analyst. He called last week's meeting with Vladimir Putin “nothing short of treasonous.”

JACKSON: Now, he's on a list that includes former FBI officials James Comey and Andrew McCabe. Neither of whom currently have security clearances because they were fired. Michael Hayden former CIA director said the threat “won't have any effect on what I say or write.” Former Obama national security adviser, Susan Rice silent for now.

JAMES CLAPPER: I think this is just a very, very petty, petty thing to do.

JACKSON: Former intelligence leaders typically keep their clearances so they can to talk about sensitive matters with their successors.

KEN DILANIAN: A security clearance is also very valuable for former officials in a private sector. And so, to lose one could amount in a financial penalty.

JACKSON: But the President himself is usually personally involved in decisions to revoke the clearance. To critics, it's not just Nixonian, it’s political punishment.

SENATOR MARK WARNER: And it concerns me greatly if this White House breaks precedent in trying to attack former members of the intelligence community because they simply express their views and their first amendment rights.