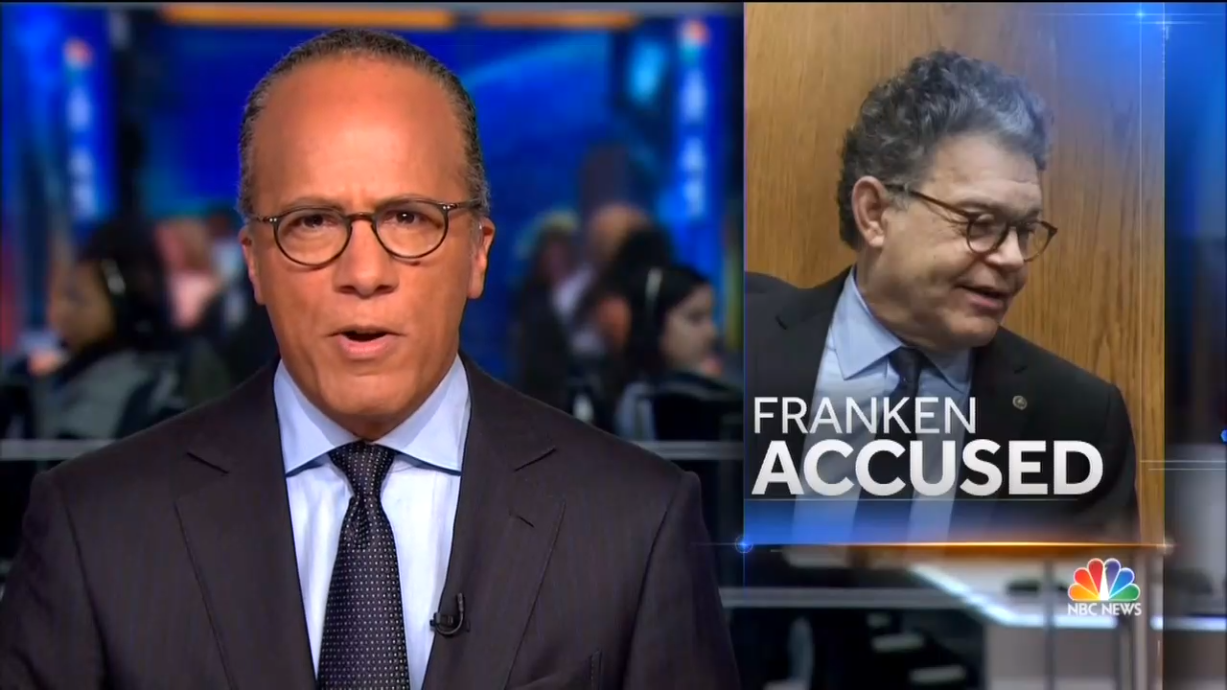 [NewsBusters reached out to Attorney Paul Liggieri, the lawyer who filed the lawsuit against New York Governor Andrew Cuomo for comment on the lack of national coverage. His comments are below.]

Monday brought a deluge of new sexual harassment allegations implicating high profile men across the worlds of politics and journalism. Among the accused was CBS’s Charlie Rose, which was adequately reported by the Big Three Networks (ABC, CBS, and NBC). But in stark contrast, they completely omitted the emerging allegations against New York Times White House Correspondent Glenn Thrush, and the second accuser of Democratic Senator Al Franken went grossly under reported.

Outrageously, Spanish-language network Telemundo had a complete blackout of the allegations leveled at Rose, not a single second of airtime dedicated to the story. Meanwhile, Univision brushed over it with a pathetic 22 seconds.

Three young women I interviewed, including the young woman who met Thrush in June, described to me a range of similar experiences, from unwanted groping and kissing to wet kisses out of nowhere to hazy sexual encounters that played out under the influence of alcohol. Each woman described feeling differently about these experiences: scared, violated, ashamed, weirded out.

Thrush was known for being a very vocal critic of the Trump White House and was a commentator for MSNBC. Both The Times had suspended Thrush pending an investigation (with MSNBC choosing to await the results of the investigation). His connection to MSNBC made the story’s omission from NBC Nightly News even more concerning since they did report on the allegations against commentator Mark Halperin.

On the politics front, Lindsay Menz was the second woman to come forward and accuse Democratic Senator Al Franken (Monn.) of touching her inappropriately. And shockingly, CBS Evening News actually failed to report the new accusation altogether. Meanwhile, on ABC’s World News Tonight and NBC Nightly News, they didn’t seem to care enough to give the story much time.

ABC White House Correspondent Cecilia Vega briefly mentioned Franken’s new accuser at the end of yet another report about Alabama Senate candidate Roy Moore, after being prompted by Anchor David Muir. In all, they gave the new accusation against Franken only 43 seconds. On NBC, Anchor Lester Holt hid the new accusation at the end of a series of reports on the claims against Charlie Rose and Roy Moore. NBC only gave the Franken story a mere 23 seconds.

Both networks noted that Franken was a Democrat and sitting U.S. Senator when the latest alleged incident was said to have occurred.

Another harassment related story that had gone unreported by the big three networks was the allegation that New York Governor, and rumored Democratic presidential hopeful for 2020, Andrew Cuomo turned a blind to harassment complaints against an appointee.

“An upstate woman has stepped forward to reveal she is the sex-harass accuser who prompted the resignation last month of a high-ranking Gov. Cuomo appointee — and to accuse the governor of repeatedly ignoring his pal’s ‘horrific acts,’” wrote the New York Post on Saturday. According to Lisa Marie Cater, her repeated whistle blows went unanswered by the Governor’s Office. The allegations came out when she filed a federal lawsuit against the state.

Clearly, the big three networks find certain harassment allegations more deserving of their time than others and they seem to follow a pattern. Charlie Rose was a such a noted journalist that it appeared to force their hand.

In a Tuesday phone call with Paul Liggieri, the attorney for Lisa Marie Cater, he told NewsBusters that while he applauded the expansive coverage his case against New York Governor Andrew Cuomo and appointee Sam Hoyt received by the local network news outlets, he was disappointed to learn of the lack of coverage in their national broadcasts:

While it is fair to say that number of local networks reached out to me, with a story that is as large as this one, which as the evidence shows implicates some of the most powerful men in the State of New York, one would expect that this story would also be given attention at the national level by the major networks. And in my opinion, irrespective of who the accused is, each of these women are telling a horrific story in which they had the bravery and courage to come forward.

And in the report by The New York Times, it appeared as though they did not reach out to Cater’s counsel for comment or a statement. Instead, they spoke of Cuomo and Hoyt’s accuser from the accused's perspective and touted how Cuomo had hired many women for his administration. 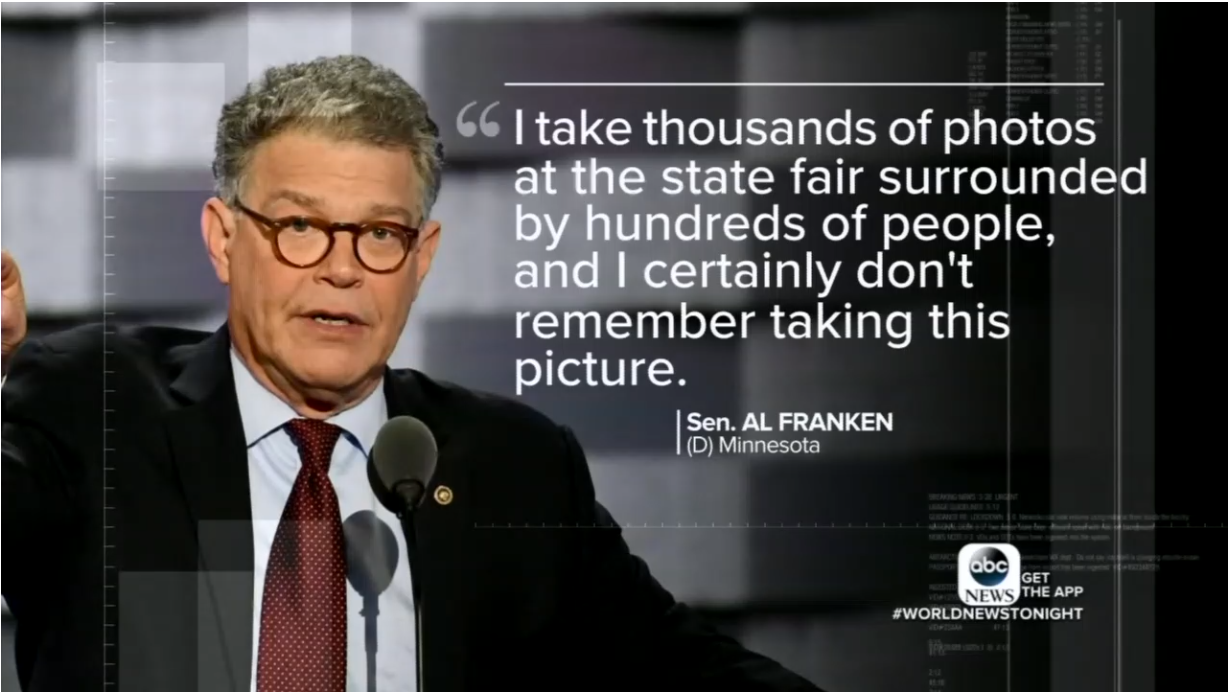 DAVID MUIR: So, let's get live to Cecilia Vega at the White House tonight. And Cecilia, President Trump tweeted about Senator Al Franken, and tonight, another woman is now accusing Senator Franken of inappropriate behavior?

CECILIA VEGA: David, 33-year-old Lindsay Menz, take a look at this photo. She tells CNN that Franken grabbed her backside when they were posing for this picture back in 2010. He was a sitting senator at the time. In a statement tonight, Franken says, quote, “I take thousands of photos at the state fair surrounded by hundreds of people. And I certainly don't remember taking this picture. I feel badly that Ms. Menz came away from our interaction feeling disrespected.” Tonight, David, a spokesperson for Al Franken says he does not plan to resign in the wake of this second accusation.

MUIR: Cecilia Vega leading us off tonight. Cecilia, thank you.

LESTER HOLT: A second woman has now come forward to accuse Senator Al Franken of inappropriate touching. She says the Democrat grabbed her behind while they took a photo together at the Minnesota State Fair, this time while he was a sitting senator in 2010. Franken has not responded to the latest allegation. A number of his Senate colleagues have called for an ethics investigation which Franken has vowed to cooperate with.