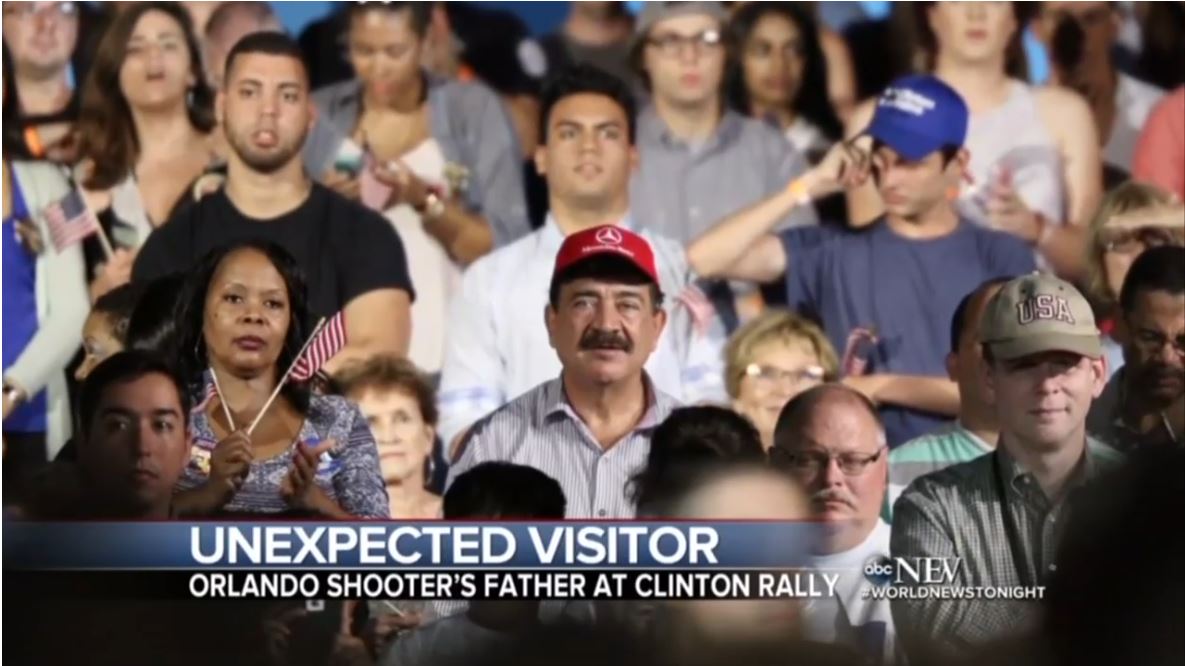 Similar to how the “Big Three" played down the alleged ransom payment to Iran, the nets chose to focus primarily on a Donald Trump controversy instead of a Hillary Clinton one. On Monday Clinton held a rally in Orlando, Florida and in attendance was Seddique Mateen, the father of the Orlando nightclub terrorist, while on Tuesday Trump used innuendo to suggest that 2nd Amendment supporters would somehow stop Clinton. In all, the nets dedicated over four times the coverage to Trump, rather than Clinton, during their Tuesday evening broadcasts.

CBS Evening News gave Trump’s comment a brief and two full reports totaling 3 minutes 39 seconds. “Donald Trump spoke off the cuff and took his campaign off the rails, again,” stated anchor Scott Pelley leading off the whole show, “This time, it was a remark that some took as a threat of violence against Hillary Clinton or the Supreme Court justices she might appoint if elected president.” In stark contrast, CBS only gave the Mateen story a scant 24 seconds and noted the event was open to the public.

On ABC’s World News Tonight, reporter Tom Llamas featured a tweet from Senator Chris Murphy condemning Trump, saying, “"Don’t treat this as a political misstep. It’s an assassination threat, seriously upping the possibility of a national tragedy and crisis.”” And during their Mateen segment they played a clip of Mateen talking with their local affiliate, where he said, “It's the Democratic Party, so everybody can join.”

NBC Nightly News gave absolutely zero time to the Matten story, they instead chose to focus all of their political coverage on Trump. “But we want to start at home with Donald Trump and a potential new controversy simmering tonight after a remark that at best was a joke and at worst was an implied threat of violence,” said anchor Lester Holt leading off the night.

No network mentioned how Clinton made a similar comment in May of 2008, when she was battling then Senator Barrack Obama for the Democratic Party nomination:

HILLARY CLINTON: You know, my husband did not wrap up the nomination in 1992 until he won the California primary somewhere in the middle of June, right?

CLINTON: We all remember, Bobby Kennedy was assassinated in June in California. You know, I just, I don’t understand it.

SCOTT PELLEY: Clinton opened a rally near Orlando yesterday by paying tribute to the 49 people who were murdered in June at the Pulse nightclub. Well, it turns out just a few feet away, wearing a red hat, was Seddique Mateen, the father of the Orlando gunman. Today, the Clinton campaign said Mateen was not invite to the event. The event was open to the public. 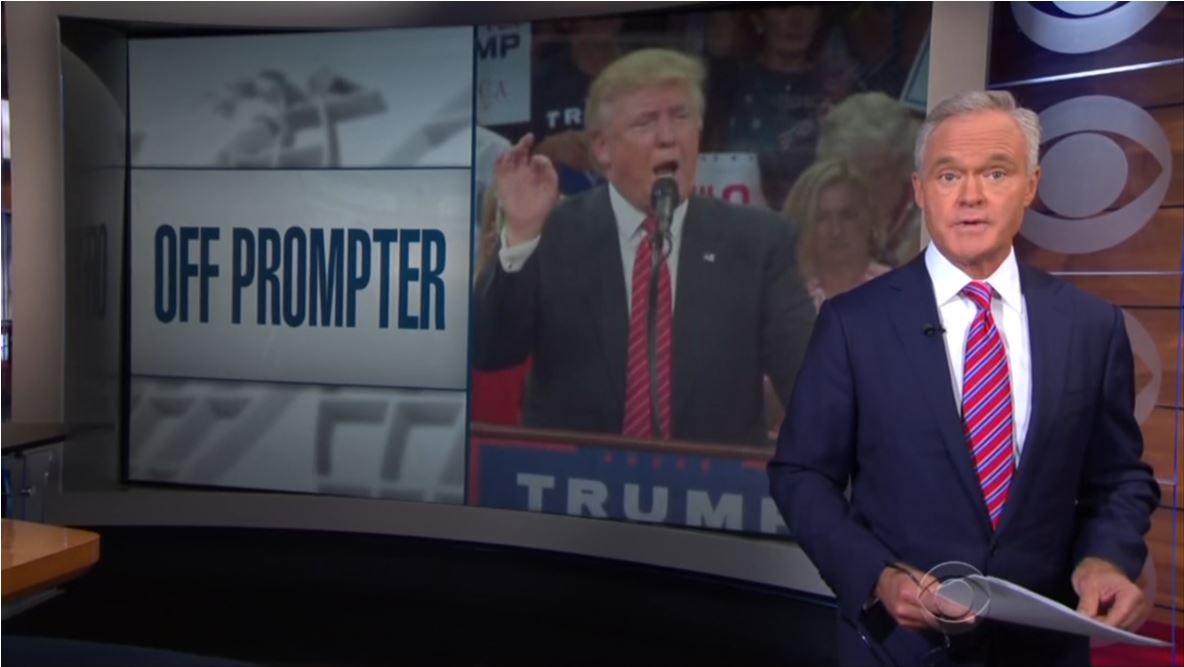 SCOTT PELLEY: The teleprompter was gone today. Donald Trump spoke off the cuff and took his campaign off the rails, again. This time, it was a remark that some took as a threat of violence against Hillary Clinton or the Supreme Court justices she might appoint if elected president. Here was Trump in North Carolina.

PELLEY: Of course, the second amendment establishes the right to bear arms. The Clinton campaign said Trump was inciting violence. Trump's campaign had another explanation. Major Garrett is joining us now. Major.

MAJOR GARRETT: Scott, Donald Trump's first impulse was to put out a statement that blamed the "Dishonest media." In it, the Trump camp felt no need to explain what Trump meant and address accusations that even indirectly, he was calling for violence against Hillary Clinton. However, Scott, Trump did address this roiling controversy moments ago in an interview with CBS affiliate WNCN, here in North Carolina. 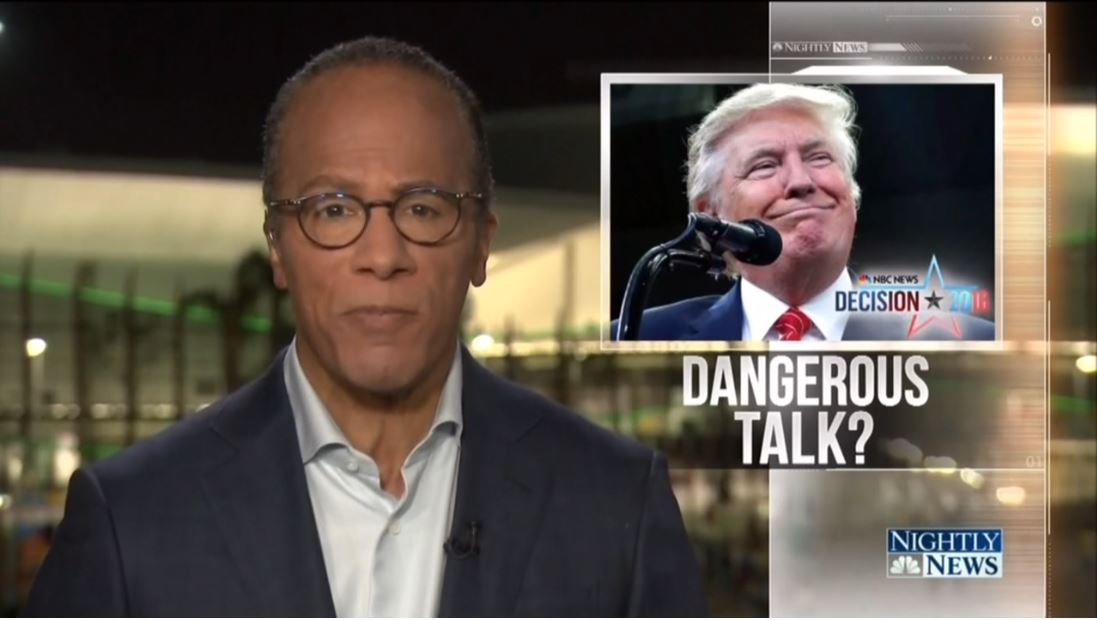 UNIDENTIFIED REPORTER: If you could explain what you meant.

GARRETT: Even so, comments like this have driven away members of Trump's own Republican Party, among them Maine Senator Susan Collins, who wrote this morning in the Washington Post Trump's, quote, “Lack of self-restraint and his barrage of ill-informed comments would make an already-perilous world even more so." The National Rifle Association, which endorsed Trump in May, came to his defense, tweeting that Trump is right about the Supreme Court. And in a second tweet, urged voters to defeat Clinton with the hashtag #neverhillary.

Now Scott, senior Trump strategist Jason Miller told me in a phone interview that, of course, Trump was not referring to violence, only to the political clout wielded by voters who are passionate about the second amendment. Rudy Giuliani, the former New York City Mayor and Trump surrogate, amplified that message here in Fayetteville moments ago.

PELLEY: Major, thank you. But, of course, that's not the way the Clinton campaign sees it. Nancy Cordes has that. Nancy.

NANCY CORDES: Scott, Clinton campaign said there is no disputing what Trump meant, and campaign manager Robby Mook issued this statement: “This is simple—what Trump is saying is dangerous. A person seeking to be the President of the United States should not suggest violence in any way.” Clinton's running mate, Senator Tim Kaine, just weighed in a short time ago from Texas.

TIM KAINE: It just revealed a sort of complete temperamental misfit with the character that’s required to do the job and in a nation with— we gotta be pulling together and countenancing violence is not something any leader should do.

CORDES: Massachusetts Senator Elizabeth Warren followed that up with this, quote, “Donald Trump makes death threats because he’s a pathetic coward who can’t handle the fact that he’s losing to a girl.” Interestingly, Scott, one thing Democrats are not expressing tonight is surprise. They note that this is the same man who encouraged violence against protesters at his rallies and who joked that he could shoot someone and still not lose votes.