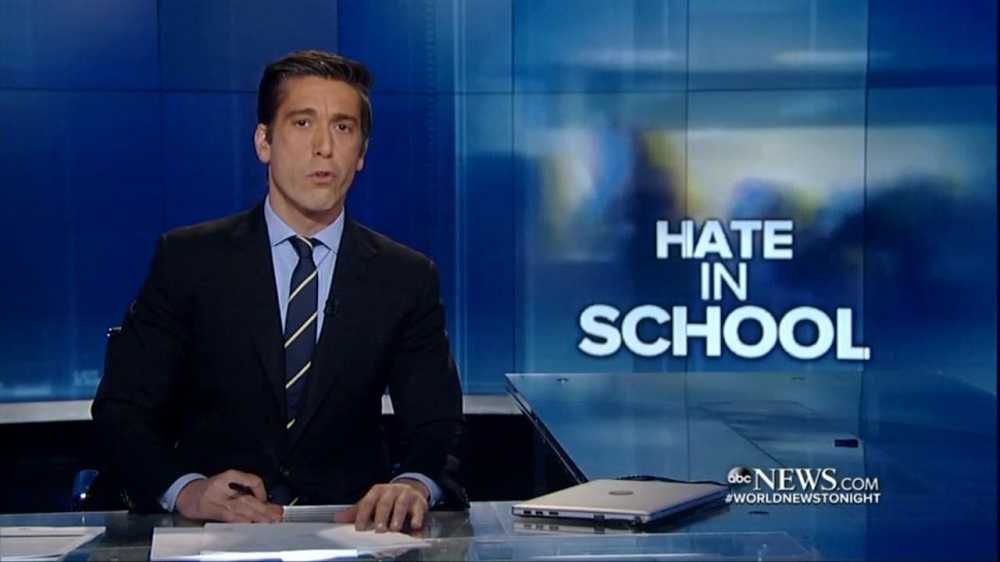 ABC, CBS, and NBC's evening newscasts all devoted air time to racially-charged incidents in schools in the wake of the election. However, NBC Nightly News stood out from its competitors for failing to mention the violence against Donald Trump supporters in recent days. ABC's World News Tonight featured cell phone video of a California high school student being punched for supporting Trump. CBS Evening News played footage of "people celebrat[ing] a Trump voter being pummeled" in Chicago. The CBS newscast also zeroed in on a "kill Trump" hashtag on Twitter. [video below].

Correspondent Jim Axelrod led his CBS Evening News report with the video of the attack on the Trump supporter in Chicago: "This white man was beaten after a traffic dispute with some African Americans in another car." Some of those near the perpetrators cheered them on to "beat his ass," and shouted, "Don't vote Trump!" He spent a significant portion of the segment on the race-based bullying in schools after Election Day:

AXELROD: And a call of 'white power' while students hold a Trump-Pence sign in the halls of a school in York, Pennsylvania.

Online, the accounts are piling up. Swastikas in Philadelphia; familiar sexist vulgarities in College Station, Texas; 'gay families burn in hell' in North Carolina. And #whitesonly may be the least-offensive thing written on a door at a high school in Maple Grove, Minnesota.

Axelrod ended his report with the assassination calls on Twitter: "Then again, consider this from the sometimes-incendiary realm of social media: the Twitter hashtag 'killtrump' - hard to say exactly how many Tweets included it; but certainly...they number in the hundreds." Anchor Scott Pelley reponded by pointing out that "of course, it's a felony to threaten the President."

On ABC's World News Tonight, correspondent Linsey Davis spent most of her report on the racially-charged incidents in schools:

LINSEY DAVIS (voice-over): (clip of students chanting, "No justice, no peace!") A dramatic scene today at this high school in Nebraska, where hundreds of students walked out to protest President-Elect Donald Trump — as tonight, schools across the country grapple with how to reassure students and parents in the midst of tension seemingly triggered by the outcome of the election.

UNIDENTIFIED MALE TEACHER (from Facebook video): Scared, confused, betrayed — disconnected from the vision of this country.

DAVIS: In this video, teachers recount emotional talks with students, as racist videos and graffiti have popped up on campuses. (clip of students chanting, "Build the wall!") — like this cell phone video at a Michigan middle school cafeteria; this school in Pennsylvania: chants of 'white power.' (clip of student chanting, "White power!")

Davis briefly mentioned that "in an interview with the Wall Street Journal today, when asked if he thought his rhetoric had gone too far in the campaign, Trump responded, 'No. I won.'" She then continued with the "cell phone video...[of] a Trump supporter at a high school in Woodside, California being attacked by another student." The journalist included a soundbite of the student recounting how her attacker "said, you support Trump. You hate Mexicans."

Correspondent Kristen Welker spent the first part of her report on NBC Nightly News on the anti-Trump protests across the country. After touching on the "racially-charged actions" appearing in schools, she touted "concerns some of Trump's rhetoric from the trail has trickled down." She also included a clip of a Trump backer calling on the President-Elect to take steps to derail the violence:

Early this morning, President-Elect Trump Tweeted, 'Love the fact that the small group of protesters last night have passion for our great country' — a major change in tone from last night, when he sounded more like candidate Trump: 'Professional protesters, incited by the media, are protesting — very unfair.'

This all comes amid some reports of racially-charged actions across the country. In Bucks County, Pennsylvania, offensive graffiti found in the stalls of two school bathrooms — including a swastika and a warning: 'If Trump wins, watch out!' Fears setting in for some students—

UNIDENTIFIED FEMALE STUDENT: It's just an act against human decency. It doesn't really matter which side of the political spectrum you're on, or which candidate you supported. It's just not right.

WELKER: And deep concerns some of Trump's rhetoric from the trail has trickled down.

UNIDENTIFIED WOMAN: Discourse in this country has changed forever; and if you want this to be a country that you want to live in and raise your children in, you need to do something about this.

WELKER: Trump supporter Chris Wooten says it's time for Trump himself to condemn all the violence.

CHRIS: I would like to see him come forward in the next 24 to 48 hours, with — without a doubt, and put people at ease.