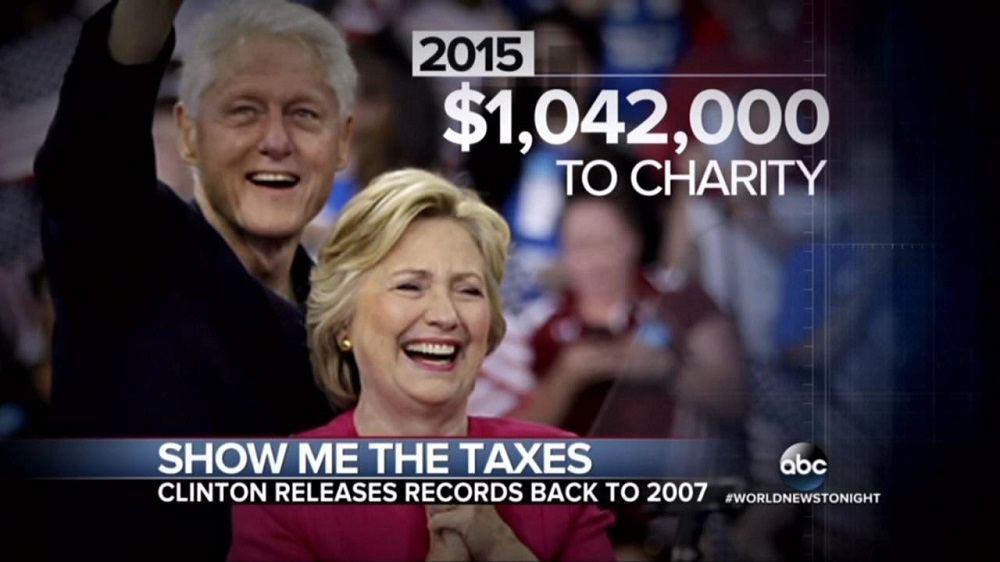 On Friday, the Big Three and Spanish broadcast networks' evening newscasts all reported on Hillary Clinton releasing her joint tax returns with her husband, Bill, and how much they gave to charity. However, ABC and Univision conspicuously left out that the Clintons made almost all of their 2015 charitable donations to their own foundation. NBC's Kristen Welker (along with CBS and Telemundo) reported that the couple "donated just over $1 million to charity — virtually all of it to the Clinton Foundation." [video below]

On World News Tonight, ABC's Cecilia Vega outlined that "the Clintons earned more than $10 million last year — a steep drop from the $28 million a year earlier — the result of fewer paid speeches, an issue that has dogged her campaign from the start." She underlined this last point with a clip from former Clinton opponent Bernie Sanders. Vega continued that "Hillary Clinton still earned more than a million dollars for speaking to industries...The Clintons' federal tax rate: more than 34 percent — and they donated more than a million dollars to charity." Instead of reporting where the Clintons made their donations, the journalist pointed out that "under Trump's proposed tax plan...the Clintons would have saved more than $1.5 million."

Anchor Enrique Acevedo gave a broader view of the couple's tax returns on Noticiero Univision (thanks to MRC Latino analyst Edgard Portela for the translation):

ENRIQUE ACEVEDO: Well, meanwhile, Hillary Clinton released her most recent tax returns as is tradition among the presidential candidates in this country. In 2015, the Clintons — Bill and Hillary — brought in 10,600,000, of which they paid about 35 percent in taxes — more than three and a half million dollars would be that 35 precent. That is a higher tax rate than the one they registered in between 2007 and 2014. In those nine years, the Clintons paid $46 million in taxes, and donated 16 million to philanthropic causes.

By contrast, Maria Celeste Arraras mentioned the Clintons' donations to their own charity on Noticiero Telemundo:

MARIA CELESTE ARRARAS: Hillary Clinton made her tax returns public from the last two years, and challenged Donald Trump to do the same. The documents demonstrate that in 2015, her and her husband Bill Clinton had an income of $10 million, and that they donated $1 million to their own foundation. Their income that year was much less than the 28 million dollars that they declared in 2014. Trump has said that he will not release his tax returns, arguing that he is being audited — an excuse that many question because the candidates for President always release them.

Chip Reid gave a detail during his report on CBS Evening News that the other networks overlooked — Mrs. Clinton's book earnings:

CHIP REID: Hillary and Bill Clinton, filing jointly, made about $10.7 million last year. Most of it was speaking fees — $5.3 million for him, $1.5 million for her. She also got $3 million for her book, 'Hard Choices.' Their federal tax rate was 34.2 percent. They gave about a million dollars to charity — almost all of it to the Clinton Family Foundation, which is separate from the controversial Clinton Foundation.

On NBC Nightly News, Welker also mentioned the Clintons' contributions to their own foundation. But instead of playing a clip of Senator Sanders, the correspondent played a soundbite of Mrs. Clinton's talking point about her speech transcripts:

KRISTEN WELKER: The filings show the Clintons made a combined $10.7 million last year — far less than the $28 million they made the year before. They donated just over $1 million to charity — virtually all of it to the Clinton Foundation — and more than a half of the Clintons' income from paid speeches — some of the same speeches she came under fire for during the primary for not releasing transcripts.

HILLARY CLINTON, (D), PRESIDENTIAL NOMINEE (from CNN Democratic presidential debate): Let's set the same standard for everybody. When everybody does it — okay, I will do it.

The transcript of Cecilia Vega's report from ABC's World News Tonight on August 12, 2016:

DAVID MUIR: Meantime tonight, Hillary Clinton releasing her 2015 tax returns; and asking Donald Trump, where are his? And we do the math tonight: how much would the Clintons have saved under Donald Trump's proposed tax plan?

[ABC News Graphic: "Show Me The Taxes: Clinton Releases Records Back To 2007"]

CECILIA VEGA (voice-over): Tonight, Hillary Clinton taking on Donald Trump over his refusal to releases his taxes — using his own words against him in a new video.

VEGA: And applying more pressure by releasing hers — the Clintons earned more than $10 million last year — a steep drop from the $28 million a year earlier — the result of fewer paid speeches, an issue that has dogged her campaign from the start.

SEN. BERNIE SANDERS, (D), VERMONT (from presidential campaign event): Any speech that great should be released to the American people. (audience cheers and applauds)

Today, protesters calling on Trump to release his taxes — they were dragged out of his Pennsylvania rally. But in recent weeks, David asked Trump about the argument Clinton is now making.

MUIR: We know this will be her argument. She says, maybe you paid nothing or close to nothing; maybe, you're not as rich as you say you are; maybe, you haven't given away as much to charity. So, I wanted to give you the opportunity to respond right now to Hillary Clinton. Will you reveal your taxes to the American people before the election?

TRUMP: As soon as the audit's done — I'm under a routine audit. I've been audited many, many years in a row—

MUIR: What is that audit is after Election Day? Is there a chance that your tax return won't be—

TRUMP: I — I don't know that it will be. I hope it's not. But you know what? If it's before, I give my tax returns. I have no problem with it.

MUIR (live): And Cecilia Vega with us live tonight — any word on whether he will release those taxes? And he claims that the tax release today by Clinton was a diversion, Cecilia?

VEGA: His campaign is calling it a distraction — an attempt to distract from her e-mail controversy. But David, from Trump himself, he is uncharacteristically quiet on when he might release his taxes; and so far, no response from anyone on his campaign, despite our repeated requests for comment today, David.

MUIR: All right. Cecilia Vega, we'll see you here on the news desk this weekend. Thank you.