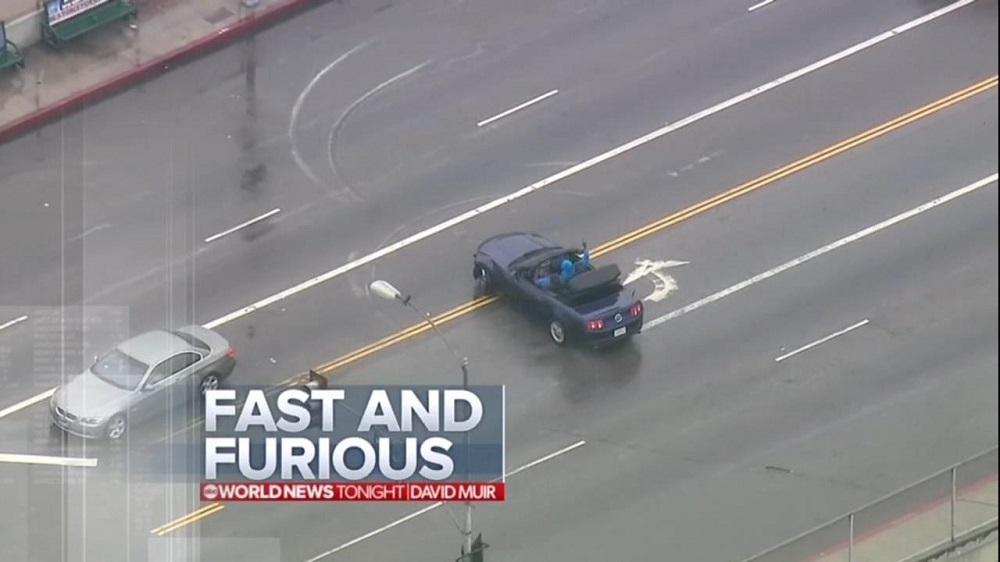 On Friday, the Big Three networks' evening newscasts gave a collective yawn at the latest development in the Obama administration's Fast and Furious scandal: the White House "turning over to lawmakers thousands of pages of records" related to the gunrunning debacle to the House Oversight and Government Reform Committee. ABC's World News Tonight actually used the "Fast and Furious" phrase at the top of the program, but not in reference to the controversy. Instead, they mentioned it as they teased a one minute and 30-second segment on the latest police chase from Los Angeles. [video below]

Substitute anchor Tom Llamas previewed Matt Gutman's report on the Golden State burglary suspects: "And fast and furious: new images of this wild chase — suspects tearing up the streets of Los Angeles — high-fiving strangers; taking selfies; and what we're learning tonight — why police weren't up against any ordinary driver." During the segment, Gutman disclosed that suspect Herschel Reynolds was a "motor vehicle operator for the U.S. Marines."

NBC Nightly News also aired a 17-second news brief on the Los Angeles car chase. CBS Evening News didn't mention the story. However, the newscast, along with its ABC and NBC competitors, covered Bruce Springsteen cancelling his upcoming concert in Greensboro, North Carolina as an act of "solidarity" with leftist opponents of the Tar Heel State's new "bathroom" law.

In January, a federal district court judge rejected Obama's executive privilege claim over records detailing the Justice Department and White House's response to Operation Fast and Furious, a Bureau of Alcohol, Tobacco, Firearms and Explosives investigation that may have allowed as many as 2,000 firearms to pass into the hands of Mexican drug cartels....

Both sides had until midnight Friday to file an appeal. Instead, the Obama administration turned over a set of documents to the House Oversight and Government Reform Committee....Justice Department spokesman Patrick Rodenbush confirmed that the administration does not plan to appeal. He argued that Jackson's ruling validated Obama's initial claim of privilege.

Of course, this wasn't the first time in 2016 that ABC, CBS, and NBC has ignored developments related to the Justice Department scandal. Three weeks earlier, the Big Three networks, along with Univision, failed to cover that a gun carried by Mexican drug kingpin El Chapo was linked to Fast and Furious. By contrast, Telemundo aired a 31-second news brief on the news. The news outlets also ignored the Associated Press's January 2016 reporting that broke the possible connection to El Chapo.

The full transcript of Matt Gutman's report from the April 8, 2016 edition of ABC's World News Tonight:

TOM LLAMAS: Next tonight, L.A.'s a town that knows police chases, but this latest case really stands out — burglary suspects doing donuts and posing for selfies, but also putting a lot of  people in danger. Tonight, the big question: why didn't police close in sooner?

MATT GUTMAN (voice-over): We learned tonight the wheel man of the blue Mustang convertible, swinging clear of police bikes and spinning donuts, was a motor vehicle operator for the U.S. Marines. Herschel Reynolds and his showboating co-pilot's brief brush with notoriety began with cops in pursuit and helicopters buzzing. They realized they're on TV.

GUTMAN (on-camera): And it was right here on a soggy Hollywood Boulevard, beside the Walk of Fame, that the duo in the Mustang really started playing to their instant fan base.

UNIDENTIFIED MALE REPORTER (voice-over): And a lot of showboating going on here.

GUTMAN (voice-over): One alert bar-goer adds to the coverage, Instagram-ing the Mustang speeding by not once, but twice; then, panning back to the live TV.

Questions tonight: why didn't police intervene, as the suspected burglars went on that joyride, spinning donuts on Hollywood Boulevard?

UNIDENTIFIED MALE REPORTER: No regard for their — their personal safety or the safety of any others—

GUTMAN: Authorities saying they were hanging back for pub safety — so far back that once stopped, the suspects wait seven minutes mingling, chatting on the phone, posing for selfies, until police arrive. Reynolds then calmly allowing himself to be cuffed. Matt Gutman, ABC News, Los Angeles.

LLAMAS: And we thank Matt for that report.