Remind us: who is Biden's border czar? We seem to remember that it's Kamala Harris—even if, after more than a year in office, she hasn't managed to make it to the actual border. Yet there was Tiffany Cross—a huge Harris fan—on her MSNBC show Saturday morning, in effect accusing Biden-Harris of a racist double-standard immigration policy favoring white Ukrainians over asylum seekers from Central America and Africa.

Cross teased the segment by asking, "What's up with this double standard?" She then brought on a guest to claim that "our immigration system has always been built on ideas of race," and that Border Patrol agents see non-Spanish-speaking whites as deserving of better treatment.

She also played a clip of CBS Evening News host Norah O'Donnell confronting DHS head Alejandro Mayorkas over the alleged double standard. Cross decried Mayorkas having told O'Donnell that he would tell Central American asylum seekers not to risk the "dangerous journey," but to instead follow other "pathways" that have been created. 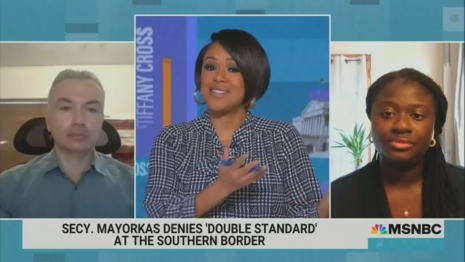 Except, that's not true. Not to say that life in Central America isn't difficult, or even dangerous, for many. But the level of death and destruction in Ukraine is incomparably worse. The war crimes being committed by the Russians there evoke some of the worst images of WWII.

But for identity-politics leftists like Cross, who see the world and virtually every issue through a racial lens, racism is always lurking. Did Cross realize that in accusing the US of a racist double standard on immigration, she was condemning Biden, and her revered Kamala Harris?

On her MSNBC show, Tiffany Cross accusing the United States of applying a racist double standard for asylum seekers, favoring white Ukrainians over Central Americans and Africans was sponsored in part by Progressive.

TIFFANY CROSS: As President Biden vows to expedite entry for 100,000 Ukrainians, we're asking what's up with this double standard?

Ukrainians are bumping up against the same treatment that African and Central American asylum seekers experience regularly. They, too, are fleeing wars, violence, dictatorships, gang warfare, and cartel terrorism. Why do you think as a country some people have more sympathy for one group and not the other?

SAMAH SISAY: Thank you. Yes. Unfortunately, I think what we're seeing is that our immigration system has always been built on ideas of race, and who belongs, and who is deserving of certain treatment. And so while many Ukrainians who are coming to the Mexico/US border are experiencing detention or experiencing difficulties going through the asylum process, the fact is they're being allowed in. Which is not the same for a lot of other immigrants who are coming from Central America, from African countries who are fleeing similar violence, right?

And so I think, unfortunately, our immigration system has been based on race for the longest time. And, therefor, the discretion that the Border Patrol agents are afforded when they see someone who is white, who is non-Spanish-speaking, is this idea that maybe they're coming from actual places that need help or are facing actual violence. Where, we have been told in the media repeatedly that people coming from Central America and other countries are just trying to come in the U.S. for jobs and things like that and they're not actually fleeing violence.

NORAH O'DONNELL: Is there a double standard here?

ALEJANDRO MAYORKAS: There is not.

O'DONNELL: We just heard from Manny Mayorkas at the border. He also met Roxanna Ruiz Ramirez, from Honduras. She's been waiting for nine months to claim asylum, and that gang threats have put her life at risk, to. What do you say to migrants like Roxanna?

MAYORKAS: What we say is, do not take the dangerous journey. We are building an asylum system that has been dismantled. We are providing alternative pathways to seek relief under the laws of the United States.