Tiffany Cross teased Elie Mystal's appearance on her MSNBC show on Saturday by saying, "get ready for the outrage from Elie."

Press Rocket button, get mortgage. Press Elie Mystal, get outrage. That's Mystal's shtick, and that's why Cross so frequently has him on her show. He procures airtime by serving as a surefire, professional provocateur, a verbal bomb-thrower par excellence.

Introducing him as a "Cross Connection favorite and my pal," Cross invited Mystal to comment on the trial of Kim Potter, the ex-police officer accused of manslaughter in the death of Daunte Wright. And Mystal reliably delivered the outrage.

Cross played a clip of the prosecutor lecturing Potter: "You stopped doing your job completely, you didn't run down the street and try to save Daunte Wright's life, did you?" Cross lectured "The criminal justice system is very unforgiving and does not view or prioritize black lives in this country. Daunte Wright was presumed guilty when he was pulled over." 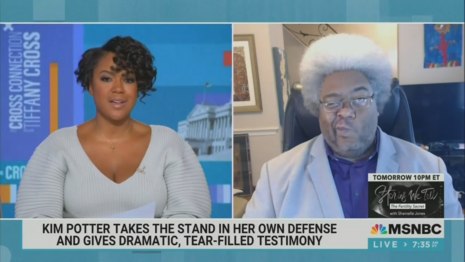 A supremely skeptical Mystal [see screencap] rejected Potter's tears as phony during her testimony. He characterized it as:

"You are a racist. You killed somebody. And then it's like [adopts crying voice], oh, I'm very sorry that I hate Negroes so much."

Mystal also described Potter as "murderous," and a "monster." Note that Potter has not been charged with murder, and there is absolutely no evidence that she intended to kill Wright.

Mystal ended his comments by ostentatiously drinking from a mug [see screencap], saying:

"There are people, I guess, who are fooled, who buy this stuff. But not me, man. I'm sitting here. I got white tears in my cup. I'm just, whatever." 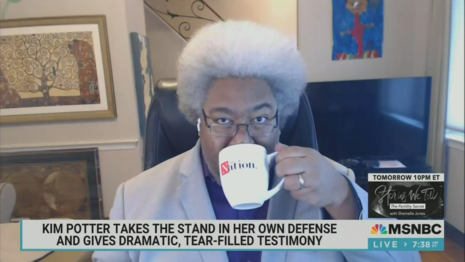 Let's review Mystal's accusation that Potter is a "racist" who "hate[s] Negroes so much." This NewsBuster has scoured the internet, and found no evidence or even suggestion of racism in Potter's past. Nor is there any indication that racism motivated the shooting.

So what led Mystal to accuse Potter of being a racist hater of black people, a murderous monster? Nothing, it would appear, other than the color of Potter's skin. White cop, black suspect. Judging people solely on their skin color is the essence of racism. So who's the racist now, Elie?

Cross seconded Mystal's accusation that Potter was faking her tears. She repeatedly murmured agreement as Mystal spoke, and ended the segment by saying:

MSNBC regular Elie Mystal accusing Kim Potter of being a racist, black-hating, murderous monster was sponsored in part by Procter & Gamble, maker of Gain, GlaxoSmithKline, distributor of Nicorette, Nature Made, and Vicks Sinex.

TIFFANY CROSS: I want to shift gears now to this Kim Potter case. Take a listen to Kim Potter. Of course, she was the officer who shot Daunte Wright. She testified this week. Lots of tears. Take a look, and we'll talk about it.

PROSECUTOR: You'd agree that as a police officer, you have the duty to render aid and communicate information to other officers, right?

PROSECUTOR: It's a part of the job to assist those who are hurt or injured, true?

PROSECUTOR: You didn't do any of those things on April 11th, did you?

PROSECUTOR: You stopped doing your job completely, you didn't run down the street and try to save Daunte Wright's life, did you?

CROSS: So, Elie, we have this officer testifying this week. We've all been able to see the testimony on screens.

The criminal justice system is very unforgiving, and does not view or prioritize black lives in this country. Daunte Wright was presumed guilty when he was pulled over. He lost his life.

ELIE MYSTAL: Is that how it's supposed to work in this country? Like, you are racist, you killed somebody. And then it's like, [adopts crying voice] "oh, I'm, I'm very sorry that I hate Negroes so much. Oh!"

Like that's, I don't think that that's how it should work in this country . . . In terms of the crying, shooting, murderous cop lady on the stand, again, we saw this in the Rittenhouse trial. That woman cried, if you're a defense attorney, that woman cried exactly at the point where you would have told her to cry. Because she cried exactly at the point where she was forced to describe killing somebody!

And so, of course, when you are talking about killing somebody, when you don't want to look like a monster for killing somebody, that's the point where you turn on the waterworks, and say like, oh, no, I'm actually a human that has emotions, I'm not Arnold schwarzenegger from Terminator 2. I do cry. I don't just terminate.

MYSTAL: There are people, I guess, who are fooled, who buy this stuff.

MYSTAL: But not me, man.

MYSTAL: It's, I'm sitting here. I got white tears in my cup. I'm just, whatever.