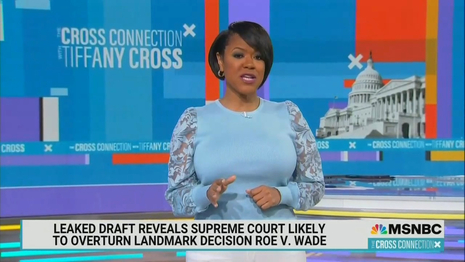 It was a challenging task but an esteemed panel of NewsBusters editors led by MRC President L.Brent Bozell and MRC’s Vice President for Research and Publications Brent Baker boiled down all the biased outbursts from lefty hack hosts, anchors, reporters and pundits in 2022 and on December 15 announced The Brian Stelter Memorial Award for Quote of the Year.

Today we present the WORST OF 2022: Cursing the Conservative Court Award.

“Justice Samuel Alito notes that some amicus briefs have argued that supporters of abortion rights really just want to suppress the size of the African-American population….Right. So, the man who helped gut voting rights, and uphold the jurisprudence of white racial innocence is now suddenly moved to protect black life. And of course he offers no context here, because while brevity may be the soul of wit, it is also clearly the soul of the dim-witted.”
— Host Tiffany Cross on MSNBC’s The Cross Connection, May 7.

Host John Avlon: “The real questions and conversations today about protests outside Supreme Court Justices houses, particularly Justice [Brett] Kavanaugh. Where do you think that line is?”
CNN’s Early Start anchor Laura Jarrett: “I think for a lot of people, a conversation about civility feels like it misses the mark when constitutional rights that you believe that you had for over 50 years are about to be overturned.”
— CNN New Day, May 9.

“What’s striking about Roe is it’s the first time in my lifetime that I can think of where a Supreme Court took away a right…I can’t think of another court in the last hundred years that has done this. A right that was there, taken away….We’re used to the Supreme Court granting rights….Making it [the Court] be viewed as an extraordinarily partisan institution….There really is a lot of people who believe this is a rigged Court.”
— NBC’s Meet the Press moderator Chuck Todd on NBC News live coverage of Supreme Court abortion decision, June 24.

“Samuel Alito, Amy Coney Barrett, Neil Gorsuch, Brett Kavanaugh, John Roberts, and Clarence Thomas are domestic terrorists and should be approached and prosecuted as such.”...
“These theocratic creatures must be indicted on charges of lying to the Senate during their confirmation hearings. Their actions have forfeited their rights to remain on the public stage, and ended the viability of the Supreme Court as currently constituted. It must be dissolved.”...
“FUCK THE SUPREME COURT AND FUCK THE REPUBLICAN-FASCIST PARTY.”
— From June 24 tweets by former MSNBC host Keith Olbermann.

“A state can now execute a woman for refusing to submit to a forced birth even if the ‘abortion’ is within hours of conception. Barbarism.”
— June 24 tweet by Washington Post columnist Jennifer Rubin.