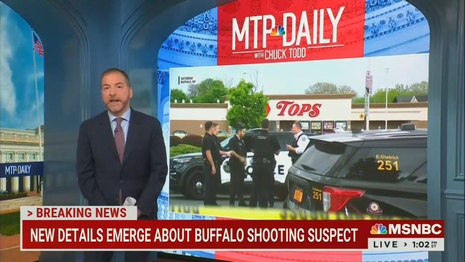 It’s been just over a week since the horrific tragedy in Buffalo where a racist, demented shooter killed 10 black-Americans and wounded three others.

That week could have been spent uniting Americans in mourning lives lost while examining what more can be done to prevent these massacres by killers who always seem to leave a trail of red flags.

No, instead leftist journalists did what they always do in these situations. They blamed conservatives, the politicians they support and even the shows they watch for the tragic shooting in Buffalo.

The following are just some of the vilest attacks on conservatives and Republicans by journalists in the wake of the Buffalo shooting:

Host Chuck Todd: “Look at the way the right tried to weaponize the idea that the DHS was going to essentially try and attempt to monitor hateful rhetoric, right?...They want to make it seem as if it’s some sort of Big Brother….This is always what the right does to appease the white supremacist movement by saying ‘Hey, free speech. Don’t touch speech.’”...
Correspondent Garrett Haake: “Right, the Ministry of Disinformation they called it.”...
Todd: “This is, sort of, the chickens coming home to roost. They’ve been appeasing this wing of the party for years and years and years. And now they are stuck with this group.”
— Host Chuck Todd on MSNBC’s MTP Daily, May 17.

“Horror in Buffalo” a “Culmination” of “White Grievance” Efforts by Trump, GOP Congress and Conservative Media

“The thing is, you spew hatred every day. You do your best to get rich off of white grievance. You do your best to make black and brown Americans suspects. You build a network strategy around that. You build an entire podcasting strategy around that. You build an entire media ecosystem strategy around that for growth, to attract racists and people infected with white grievance. And then this [Buffalo shooting] happens and you have to spend the next day going, ‘Oh, we didn’t mean what we’ve been saying every day, what our strategy has been every day to get more viewers, to get more listeners.’ And they can’t address it directly, and so they lie.”
— Co-host Joe Scarborough on MSNBC’s Morning Joe, May 17.

“This horror in Buffalo a couple of days ago seems to me to be sort of the culmination of all these conspiracy theories that used to live somewhere in the fringes of the internet, being completely mainstreamed by a President of the United States, by members of Congress, by primetime cable, things that people dared not say in public now are just part of the conversation. They are. And that message is getting to the wrong people, including an 18-year-old in Buffalo who thought he was doing something in the name of his race, by going out and attacking 82-year-old women shopping at a grocery store.”
— Co-host Willie Geist on MSNBC’s Morning Joe, May 17.

“That Buffalo shooting highlights once again how a once-fringe, racist, and anti-Semitic conspiracy theory is accepted by many Americans. The great replacement theory is a belief that there is a plot to replace white people with people of color. Now, it was first presented among white supremacists and on extremist websites. Now, many conservative politicians and pundits promoting some form of replacement theory.”
— Host Gayle King on CBS Mornings, May 18.

“There is a cause and effect to amplifying this garbage, and some of the consequences are intended, right? It stirs up racial animus, ethnic animus, religious animus. That is the intended effect of turning neighbor against neighbor, and getting people angry and afraid. Growing that, that base that is angry and afraid is part of the consequence, that’s how it spreads. The next consequence is, those people go out and vote for characters who believe in that. This garbage, that was once disqualifying, has been so mainstreamed by political leaders and far-right-wing media that they’re not wearing hoods anymore; they’re not hiding in the basement. They’re out in the open talking about this.”
— CNN political commentator S.E. Cupp on CNN New Day, May 16.

Tucker Carlson Is Partly to Blame for Shooting, Should He Be “Jailed?”

Host Nicolle Wallace: “Obviously a mass shooter is responsible for the violence and the heinous acts that the mass shooter committed. It is also true that the ideology left in the mass shooter’s screed mirrors the ideology championed by Tucker Carlson. ”...
Former Fox News chief political correspondent Carl Cameron: “It really is kind of horrible to think that journalists with national and international capacity are putting together this type of nonsense….It’s time to actually start doing things and maybe taking some names and putting people in jail.”
— MSNBC’s Deadline White House, May 17.

Fox News, GOP “Do Not Care How Large the Body Count Gets”

“New York’s senior Senator Chuck Schumer finally identified the real source of white supremacist propaganda at Fox in addressing a letter directly to Rupert Murdoch….[Sen. Schumer] suggested a direct link between the words that Rupert Murdoch pays Tucker Carlson to say and the words written by the Buffalo mass murderer before he loaded his weapons of war with the intent of murdering as many black people as possible….Rupert Murdoch does not care. Not a bit. Republican politicians do not care how large the body count gets in the permanent white supremacist assassination campaign in this country. They don’t feel a thing….The lying and the racist language have become more and more and more extreme on Rupert Murdoch’s TV channel, it has only made Rupert Murdoch richer and richer and richer.”
— Host Lawrence O’Donnell on MSNBC’s The Last Word, May 17.

“Most Racist Show” Ever!

“Mr. [Tucker] Carlson has constructed what may be the most racist show in the history of cable news….Though he frequently declares himself an enemy of prejudice….his show teaches loathing and fear. Night after night, hour by hour, Mr. Carlson warns his viewers that they inhabit a civilization under siege — by violent Black Lives Matter protesters in American cities, by diseased migrants from south of the border, by refugees importing alien cultures, and by tech companies and cultural elites who will silence them, or label them racist, if they complain.”
— Reporter Nicholas Confessore in April 30 New York Times article “American Nationalist: Part 1, How Tucker Carlson Stoked White Fear to Conquer Cable.

“Let’s be clear. The stuff Tucker [Carlson] and Laura Ingraham say every night could be written by white supremacists very often. There is a section of this manifesto where the shooter starts talking about ‘People always say diversity is strength. How is it strength?’ I can hear it in Tucker’s voice. He says this all the time, right? But the Ben Shapiros of the world say this.”
— Former Washington Post correspondent Wesley Lowery on CNN’s Reliable Sources, May 15.

Co-host Sunny Hostin: “The most extremist violence in the U.S. comes from the political right. Over the past decade, the ADL [Anti-Defemation League] has counted about 450 U.S. murders committed by political extremists of the right….And so, there is no way that the Republican Party, especially those in the extreme right-wing of the party are going to vote for this [domestic terrorism] bill because it exposes the party for what it is: the party of insurrectionists, the party that welcomes white supremacists under its tent.”...
Co-host Whoopi Goldberg: “I thought they said a couple of weeks ago, I thought everybody was against white supremacy.”...
Hostin: “It’s hard to take a stand against it when those are your voters.”
— ABC’s The View, May 19.

“Stop saying that you are pro-life if you are pro-AR-15s in the hands of young men who have wild ideas and racist theories in their heads, that are listening to people like this [Republican Representative] Elise Stefanik. We’re all looking at you, Elise. You know, somebody on Twitter said, all of your staff should quit now! We’re warning you because it’s only going to get worse! Quit now!”
— Co-host Joy Behar on ABC’s The View, May 16.