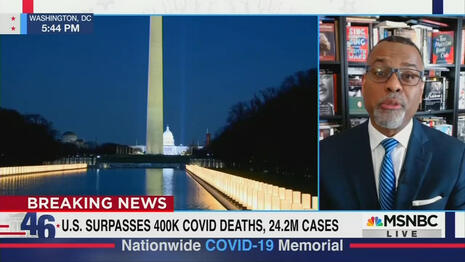 “Just listening to the words and the song and seeing the lights, President-elect Joe Biden and Vice President Harris pulled the grief and regret out of the privacy of our hearts, if just for a moment, so that we all could share it....What a first step. What a beautiful step....I’m reminded of the Psalmist, you know? ‘He heals the brokenhearted and binds up their wounds.’ Maybe the dead will speak to us now. Maybe they can rest now.”
— MSNBC contributor Eddie Glaude during live coverage, January 19.

“I actually have lauded the President from the very beginning about Afghanistan. He was dealt a horrible situation. And as of today, he’s done an extremely good job in the situation….What he’s done over the course of the last week, should be congratulated on the way this was done….I think the President has done unbelievable yeoman’s work.”
— Former ABC News chief political analyst Matthew Dowd on CNN’s Erin Burnett OutFront, August 24.

“Bill Clinton used to say that a President’s lucky to get a sentence. Lincoln saved the Union, FDR defeated the Depression and won World War II. Biden’s well on the way to writing his sentence here. This [infrastructure funding bill] is a significant investment in the country. It will rank, I think, with what President Eisenhower was doing in the 1950s.”
— Presidential historian and former Newsweek editor Jon Meacham on MSNBC’s The Beat, November 15.

How Do You “Resolve” Being Such a “Moral, Decent Man?”

“You’ve said over and over again that immigrants shouldn’t come to this country, right now. This isn’t the time to come. That message is not being received. Instead the perception of you — that got you elected — as a moral, decent man is the reason why a lot of immigrants are coming to this country and are trusting you with unaccompanied minors. How do you resolve that tension?”
— PBS White House correspondent Yamiche Alcindor to Joe Biden at press conference, March 25.

Most “Impactful First Year” Since “Reagan”

Host Erica Hill: “We can’t ignore the historical significance here. How big of an accomplishment is this [Senate passage of massive infrastructure spending bill] for President Biden at this point in his first year?”
Correspondent John Avlon: “Huge, and I think that’s the way to think about this. What are the historical comps if any to this?...I don’t think any Democratic president has had a more impactful first year legislatively since LBJ. In terms of any president, I think you’ve got to go back to Reagan’s first year where he was able to pass with bipartisan margins, a budget plan that changed the trajectory of American politics in fundamental ways. This is a huge win.”
— CNN Newsroom, August 11.

Best “Diplomatic Trip” of the “Century,” Biden Assembled the “Avengers”

Host Joe Scarborough: “I’ve been going back through my mind….maybe you can come up with a better week in American diplomacy overseas, over the past 20 years of the 21st century? I’ve been trying to figure it out, over the past 12 hours. I can’t think of a more successful diplomatic trip in the 21st century than this one….It ain’t nothing to get the United States of America and the EU on the same page….When we’re getting that team together….that’s calling the Avengers together. It’s pretty damn good.”...
BBC World News America Washington anchor Katty Kay: “Biden rallied his posse.”
— MSNBC’s Morning Joe, June 17.