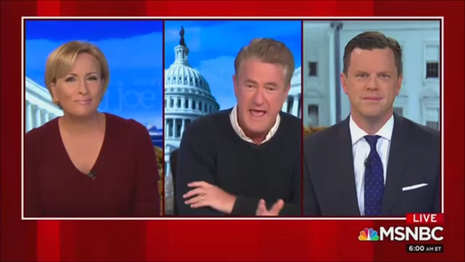 Where have we heard these before? All of those horrendous labels have been hurled at President Donald Trump by a lefty media desperately flinging their tired, overused insults at a wall hoping something, anything will stick in the final month of the 2020 campaign.

From MSNBC’s Joe Scarborough asserting “Nobody’s ever done so much to kill so many,” to CNN’s Chris Cuomo bellowing that Trump “empowers hate” by “domestic terrorists,” the following are the most vicious attacks against Trump and conservatives over the last month:

“Literally Nobody” Has Done “So Much to Kill So Many”

Co-host Joe Scarborough: “Nobody’s ever done so much to kill so many people. That is correct.”

— Discussion after playing a clip of Donald Trump at a rally, as aired on MSNBC’s Morning Joe, October 27.

“We are all tired! But mostly I’m tired of the needless sickness and the needless death and the needless terror because this mentally incompentent, inhuman dumb bastard has lied about this disease in a thousand different ways….I’m tired of....a country that should have learned something, but which in large part has been authorized to wallow and die in its own stupidity because of one man. One dumb bastard! One selfish son of a bitch!...Insisting ‘science is wrong and Fauci is an idiot and only I can save you.’ And insisting ‘You can do whatever you want, then the disease affects almost nobody.’ Donald Trump should be on trial for 220,000 murders! Death penalty for each count!”

Trump “Will Put Bullet Into the Country”

Host Chris Cuomo: “[Tom Friedman] says something pretty scary. That this could be the last week of America as we know it. I paid a lot of money for this hair. You want to scare it off my head. What does it mean?”...

New York Times columnist Tom Friedman: “It is a real possibility that we will not be able to have a legitimate transfer of power. That if the President does lose, does contest the vote, does create massive discrediting of the outcome, we could have a prolonged period where we don’t have a legitimate transfer of power for the first time in our history. And I believe the stress out of that, the economic dislocation, and the violence of that could be just terrible….Al Gore when he lost in a very close ultimately Supreme Court-decided vote, he took a bullet for the country. Donald Trump will put a bullet into the country.”

Is There Really Any Difference Between Trump and Hugo Chavez?

“President Trump has tweeted a number of times about saying we should look at libel laws, that we should consider pulling the license of media organizations like NBC News. He has revoked press credentials of journalists. None of that reminds you of Venezuela or worries you?...Isn’t the only difference between Trump and a [former Venezuelan dictator] Hugo Chavez is that Trump doesn’t quite yet have the authority to do it? Not that he doesn’t want to, he would love to, he tried to, he got huge pushback when he tried to revoke credentials.”

“Trump Would Kill Reporters If He Could Get Away With It”

“Though he kills journalists, Vladimir Putin on camera actually seems a little more willing to answer tough questions when they are asked of him. Donald Trump can’t even handle that. Of course, Donald Trump would kill reporters if he could get away with it….It’s unfortunate for him that he actually is in charge of the executive branch in a country with a constitution that was written by James Madison and others who actually foresaw the rise of tyrants and figured out a pretty damn good effective way to hold them at bay.”

“The vibrance of the party is….racist, populist, xenophobic white grievance. That’s what the Republican Party is now.”

“By any practical measurement, Trump is no longer the President. Realistically he has reduced himself to simply serving as COVID-19’s accomplice and accessory. He is — at this moment — a mortal threat to every citizen of this nation. The team of Trump 45 and Covid-19. In a world where government existed to serve, rather than to rule, he [Trump]] would have been on a plane to North Korea now seeking asylum. This is not that world.”

Do You Want to Live In the America of “Bad” Man “Bull Connor” Trump?

Co-host Joe Scarborough: “I think most Americans would agree that this election is between a good man and a bad man. And I feel comfortable saying that Donald Trump is a bad man.”...

“Ever since the nation’s birth, it has gradually expanded the idea of liberty and democracy, making America great by surging forward into the future rather than lapsing back into nostalgia for the past. Meanwhile, I will take my chances and, once again, predict that Donald Trump will lose this election. Humble as I am after these four years, I would still rather bet on and believe in the best in America.”

“For anybody that remotely cares about land, and water, and animals, and climate, this is an obvious choice. They live in two different planets. On Planet Trump there’s no gigafires out west, Miami is not flooding, there are no experts telling us this is the beginning of a new normal….It was just a clear choice last night between Biden, who calls this as existential threat and tempers the nightmare with a dream of all these green jobs, and Donald Trump, who continues to hit a gusher after gusher of lies and misinformation and insistence we stay on old, dirty fuels.”

“There is a lizard brain in this country. Donald Trump is a product of the white man’s —  the anguished, nervous white guy’s lizard brain.”

A Tale of Two Townhalls: “Thoughtful” Biden vs. “Combative” Trump

“On one hand, you had Joe Biden, thoughtful, reflective, occasionally long-winded, talking about specific policy proposals, legislation. And on the other hand, you saw a very combative Donald Trump offering very little in the way of specifics to what he would do in a second term.”

Sucking Up to America’s Worst Governor

“Many people felt you were the only one who was telling us anything….You gave us hard truths. You didn’t try to sugarcoat when we needed to hear the truth. And you also talked about your own vulnerabilities. You’re a bona fide girl dad. You have got three daughters. Even they were saying, ‘Dad, what’s the deal.’ Your brother Chris Cuomo went through a very nasty battle….You exposed a lot of your own vulnerabilities. I’m wondering as a governor of the state how you were navigating that and your own personal duties, too?”

“We are fighting for — cornball as it sounds — truth, justice and the American way. Trump and his Republican cult fight for only one thing —  this piece of shit Trump….What the ‘F’ is wrong with him? Honestly not as much as is wrong with the Republicans who permit him to blight the horizons of mankind….They awake each morning capable of extricating themselves from this sub-human slime. They may actually pray to whatever their concept of universal purpose might be and somehow skip that part in their religion that says allegiance to the Devil actually will send you to Hell. They may do all this and yet they act on only one goal: Preserving this piece of shit Trump. And they will atone!”

Try Donald Trump at the Hague for “International Crimes”

“This is considered torture — taking breast-feeding children from their moms and separating families in this way. And all I could think of when we were preparing for this segment today talking to my producers is whether or not these are considered international crimes, meaning: Should members of this administration come up before the Hague for what they’ve done. Jeff Sessions, the former, you know, DHS head, all of them….and Donald Trump maybe?”

If You Vote for Trump, You Are “Un-American”

“Here’s something you’re not hearing on Fox. Trump didn’t win the Nobel Peace Prize today. Wonder why? Maybe it was failing to call out domestic terror, like the 13 suspects who may have been acting on his insurrection calls to liberate Michigan….Maybe Trump would win a prize for peace if he didn’t empower hate.”

“Trump can be and must be expunged. The hate he has triggered, the Pandora’s Box he has opened, they will not be so easily destroyed. So, let us brace ourselves. The task is twofold. The terrorist Trump must be defeated, must be destroyed, must be devoured at the ballot box and then he and his enablers and his supporters and his collaborators and the Mike Lees and the William Barrs and the Sean Hannitys and the Mike Pences and the Rudy Giulianis and the Kyle Rittenhouses and the Amy Coney Barretts must be prosecuted and convicted and removed from our society while we try and rebuild it and to rebuild the world Trump has nearly destroyed by turning it over to a virus.”

“There is no way out for Donald Trump, literally. He is stuck in the White House, quarantining’ with a deadly virus and unable to do his favorite things, like super-spreader rallies and super-spreader White House pep rallies and super-spreader fundraisers….He likes to spread….He dialed into Fox Business, one of the few remaining networks that will still broadcast his lies, for a one hour ’roid rant….This is not a man who sounds well….And yet, he still has control of the nuclear codes. Just for a second, if this was the principal of your kids school, let’s say, would you be sending your kids to school?... He doesn’t seem in control of his emotions. He’s ranting and raving. Just loony rants and raves for an hour on Fox News. Is this steroids? Is this a psychological issue?”

All Those Other Times, I Was Faking My Compassion for Sick Trump

“You want a metaphor? You’ve got a president who is a drunk driver who is pushing others to drive drunk. That’s what he is. Do I want to see a drunk driver get hurt? Hell no. But I worry more about the people he hits. And I love seeing him do that victory lap in that limo, thank God! You know why? I knew that meant he has to be okay. Not the people who are in there with him, PPE up to their nose. Now they’ve got to quarantine. He doesn’t give a damn. And now, I do not have to feign any extra measure of compassion.”