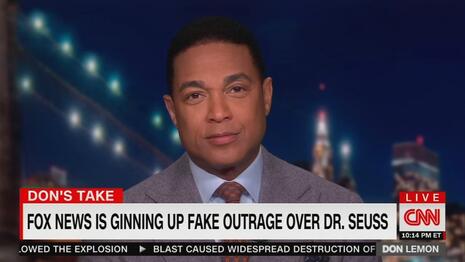 On Friday night’s CNN Tonight, host Don Lemon joined in with the liberal media’s obsession with bashing Republicans and Fox News for defending Dr. Seuss after books were cancelled by woke leftists. Lemon unspooled a five-minute commentary freaking out over House Minority Leader Kevin McCarthy (R-CA) tweeting out a video of himself reading Dr. Seuss’s Green Eggs and Ham that went viral.

Lemon lunged to complain that the Democrats had nothing to do with Dr. Seuss. (McCarthy didn't say they did.) "It has nothing to do with Democrats. Nothing at all. As a matter of fact, that particular one by Dr. Seuss is still in distribution. So none of it makes any sense. They’re playing you. Are you going to fall for it? He is trying to stoke the fake outrage machine."

Lemon then snidely assured his viewers that “we’re watching” Fox News “so you don’t have to” and assaulted Fox News for covering the cancellation of Dr. Seuss by saying that the cancellation is “a conspiracy theory” and “a lie”:

Fox is stoking this stupid, I guess you could call it a conspiracy theory, but it's a lie. Let's just call it a lie. Nothing -- nothing is being canceled about Dr. Seuss, at all. Do you guys realize how you look? It's just embarrassing. I think we know exactly why they are covering Dr. Seuss so much, and I've said it before, because it is the GOP fake outrage machine.

That's not true. “The President” does indeed have something “to do with” the cancellation of Dr. Seuss because Biden left Dr. Seuss out of his “Read Across America Day” proclamation, which is celebrated every year around March 2 because March 2 is Dr. Seuss’s birthday. Furthermore, it is a false liberal media narrative that Fox is “covering every single angle” of the cancellation. Lastly, it is objectively false that “nothing is being canceled about Dr. Seuss” because they pulled six of his books from the sales shelf.

Lemon then continued to viciously attack the GOP by celebrating it losing elections in November and defending Biden’s repulsive “Neanderthal” remark:

This partisan rant was sponsored by Harry’s Razors and HelloFresh. Let them know here if you think they should be sponsoring such content.