Thursday’s ReidOut featured more radicalizing rhetoric meant to send MSNBC viewers into a fury of hatred against anyone on the right, falsely claiming the Fox News Channel and the GOP are exclusively obsessed with cancel culture and controversies surrounding Mr. Potato Head and Dr. Seuss.

Host Joy Reid, Democratic strategist Aisha Mills, and fake Republicans Michael Steele and Charlie Sykes spent nearly 20 minutes claiming Republicans were grifters, exist to “make sure that Americans are a bit deaf, dumb, and blind to what government is supposed to do,” and feel pleasure from the sight of sick and dying Americans from coronavirus.

Reid started constructing what would become a strawman the size of a skyscraper with the notion that the Democratic Party was the only party that exists “to write bills, to pass laws, normal stuff” while the “purely performative” Republicans were “acting out the worst insecurities and fears and paranoids of the loudest parts of their voting base” while opposing aid for struggling Americans and “reforming policing in America.”

After airing a clip of Congressman Alex Mooney (R-WV) defending Dr. Seuss, Reid insisted “this very unserious political party” has “no agenda other than opposing anything the Democrats do and trying to trip up people of color and anyone else who doesn't tend to vote Republican on their way to the ballot box so they can stay in power to do nothing but wage meaningless culture wars over supposedly not being able to say Merry Christmas.”

Reid took aim at Senator Ron Johnson (R-WI), calling him the “conspiracy senator from Wisconsin, way of Moscow” and declared this Putin puppet’s latest act of villainy was intentionally keeping help from “Americans who are struggling to survive a year-long pandemic by forcing a full reading of the bill.”

Anyway, the panel segment began with Reid’s fervent endorsement of The Bulwark as a true voice of conservative policy while its thrice-married editor-at-large and conservative-turned-progressive Charlie Sykes ironically called Republicans the side that lacks ethics, focus, and substance (click “expand”):

REID: The Bulwark is all about sort of policy ideas. It’s all about reconstructing what conservatism, what the — you know, politics’s supposed to mean. It strikes me that all of the Republican Party, at this stage in its life, is just a theatrical enterprise about you can't say Merry Christmas when you can totally say Merry Christmas, about Mr. Potato head needing to have a gender, it is not a living thing. It's a literal potato with, like, ears stuck on it. But these things seem stupid, but I am shocked that they’ve been able to get away with this kind of theatre for so long.

SYKES: Well, you’re — you're right and this is what’s extraordinary, how the sideshow has become the main event for a party that used to say we're the party of ideas. We used to have debates about the stimulus package or about health care. When’s the last time, by the way, you heard a Republican on the floor of Congress talking about how do we reform access to health care? You know, it was perhaps some substantive policy issue. But this, I think, is a sign of the dominance of the entertainment wing of the Republican Party where you have more and more people who come to Congress and they're job is not to sit in a room and write legislation and solve social problems or even talk about the problems that real Americans face. It is to build followers on social media. It is to be famous for being famous. They are celebrities. So, you have people like Madison Cawthorn that, you know, puts together a staff that's all communications as opposed to legislation because they’re not in that business at all. But what you're seeing in the Republican Party is in the middle of an economic crisis and a COVID crisis, they are all culture war all the time. And you know, frankly, think about it. It's March 4th, 2021. Half a million Americans have died and our political dialogue is consumed with the gender of Mr. Potato Head and Dr. Seuss who wasn't really a doctor.

The irony meter quickly shattered into a million pieces when Steele spun a web of ironic stupidity about the GOP as grifters despite the fact that he’s spent nearly a decade simping on MSNBC, left the RNC with $23 million in debt, and participated in the Lincoln Project racket (click “expand”):

[I]t's not just the entertainment portion of the program that we're seeing. It is the grifting portion of the program that we're also witnessing because from that entertainment comes go-gobs of cash. Everybody's making some money....So, the reality for the party and it’s something I witnessed when I was there which is why the folks on K Street hated my guts because I was cutting off the cash. I wasn't spending money they way they wanted to spend. I was putting it in the states to actually win campaigns

And so the reality of is as long as the cash is flowing and I can go out there and say something ugly about Obama or Biden or both and it’s going to, you know, cha-ching my coffers, I’m doing it. And that's not what a political party should be about today particularly in the age of COVID.

Reid then brought up Fox News to back up her mountain of fake news, insisting that 33 segments since Monday on Dr. Seuss meant it was top of mind for the right and “trying to pretend they don't know why they have a problem with” racism. 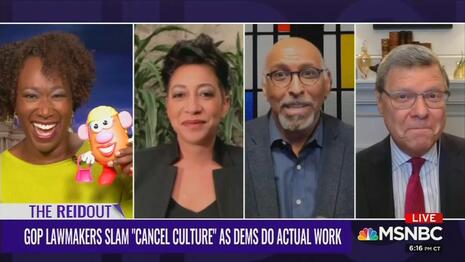 While Mills had to wait 12 minutes to chime in, she made the most of it, spewing more venom about how the GOP’s sole focus on Dr. Seuss has been “to essentially dumbify this American public” and keep them as “deaf, dumb, and blind” as possible from the government’s heart to shepherd you through life.

This, she argued, is all “about eroding civics” and “eroding democracy.”

Continuing to masquerade as sober adults, the four jesters took matters to a whole new (and worse) level when Reid whipped out a Mrs. Potato Head while Reid and Sykes claimed every single Republican cares more about a toy than health care, the minimum wage, and vaccines (click “expand, emphasis mine”):

SYKES: It does feel like we’re living in a movie version of idiocracy. By way, at least she’s anatomically correct, I think, in that — in that version. But you know, so you mentioned virtue signaling. If in fact, what's wrong with signaling virtues at a certain point? Virtues are supposed to be signaled but what they are is this perpetual outrage machine. And when you have run out of things to be genuine outraged about, you're outraged by Mr. Potato Head or Mr. — or Dr. Seuss. I mean, this is one of things — I’m sorry, it feels — you can't make this up. You can't make this up. You can’t make this up that you have members of Congress standing on the floor in the midst of all of this and they could talk about the minimum wage. They could talk about putting money, you know, how we — how do we accelerate the vaccines and instead, we're talking about how we can make people mad at one another and, to Aisha’s point, you know, it's not just dumbing it down. It's a way of basically saying these other people don't share your values. They are so — they are out to get you. They hate you. They’re going to destroy everything good and beautiful and, apparently, the symbol of good and beautiful today is you're holding in your hand that we must fight. [PANEL LAUGHS] We must fight for —

REID: To make sure —

REID: There has to be gender. She got a cute little handbag. But, you know, Michael, it seems ridiculous for me to be sitting right here on a prime time news show with a Mrs. Potato Head next to me. But this is what they're doing on the right. This is the equivalent of what Republican governance has become. Hanging around with a potato and making sure that the potato is a grown little boy because God made potato and potato, not potato and potato. That is literally the Republican platform at this moment.

STEELE: But here’s the —

REID: Are you cancelling her? 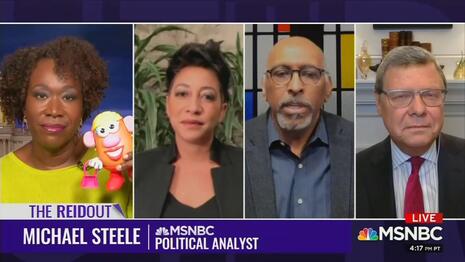 Mills interjected amidst playtime to further radicalize viewers to hate their family members and neighbors, insisting that right-leaning Americans “have no expectation that government is even designed to solve problems,” and thus shrug at the sight of Americans dying from COVID or struggling to pay their mortgages.

Steele had the last word, mocking his supposed party for having bemoaned about “los[ing] the culture war” on issues like abortion, families, and gay marriage and having, in response to that, pivoted to “animating principles” lamenting Americans don’t want a “white picket fence family.”

Instead, Steele said the right had resorted to “aggrandiz[ing] it and you can raise money off of it and that’s — that’s ugly part of all of this.”

Speaking of ugly, someone should grill Steele about if and when he learned that the Lincoln Project had become a front for John Weaver to groom young men for sex.

Thursday’s lie-filled, venomous segment was made possible thanks to the endorsement of advertisers such as ClearChoice, Ensure, LegalZoom, and Sandals. Follow the links to see their contact information so you can let them know what their businesses helped support.