In its ongoing coverage of the sheriff’s deputy from Harris County, Texas being shot Friday night outside a gas station, Monday’s edition of the CBS Evening News criticized the slain officer’s boss for making “controversial statements” about the Black Lives Matter movement that “some have called...insensitive.”

Leading into his comment about Harris County Sheriff Ron Hickman, Villafranca played a clip of Hickman denouncing anti-police rehetoric has having “gotten out of control.”

What exactly was so “controversial?” Here’s what Hickman stated about the need for the lives of law enforcement official to have significance (along with every other life): “We’ve black lives matter, all lives matter. Well, cops lives matter, too. So, why don’t we just drop the qualifying and just say lives matter.”

The CBS News correspondent than touted how “some have called the statement insensitive” before moving on with his report to properly note how “[m]ore than a thousand residents of all races came together this weekend to emphasize harmony” with Harris County District Attorney Devon Anderson promising that “[t]his crime is not going to divide us” but will instead “unite us.”

It should be mentioned that at no point in the full segments on ABC’s World News Tonight or NBC Nightly News on the shooting death was a similar statement made about Hickman. While Hickman’s comment about “lives matter” was shown on World News Tonight, correspondent Matt Gutman reported that Hickman pointed that out after “suggesting [Goforth’s] uniform could have made him a target.”

The relevant portions of the transcript from the CBS Evening News with Scott Pelley on August 31 are transcribed below. 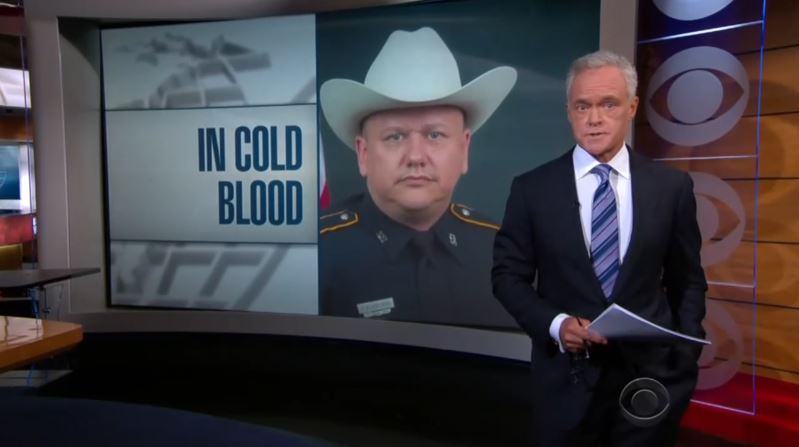 SCOTT PELLEY: The suspect in the cold-blooded murder of a deputy sheriff in Texas was taken to court today to hear the charge against him. Tonight, investigators are trying to figure out why he allegedly shot Darren Goforth over and over with no apparent provocation. Goforth was a ten-year veteran, the married father of a 12-year-old daughter and a 5-year-old son. The suspect has a criminal record and a history of mental illness. Omar Villafranca is following the case.

OMAR VILLAFRANCA: Shannon Miles made his first court appearance this morning dressed in a jail uniform in shackles. The 30-year-old is charged with capital murder in the Friday night execution-style killing of 47-year-old Harris County Deputy Darren Goforth at a suburban Houston gas station.

ANDERSON: And looked up and saw a black male with a bald head shooting, standing over Deputy Goforth and unloading a pistol into him.

VILLAFRANCA: Investigators were able to find Miles nearby at his mother's house. Detectives say ballistics evidence from the crime scene matched a gun found inside the Miles' home.

ANDERSON: We're going to try to figure out the motive, even though we don't have to prove it, under Texas law. Everybody would sure like to know the motive.

VILLAFRANCA: Since 2005, Miles has been convicted of at least five crimes in Harris County, ranging from resisting arrest to criminal mischief. In 2012, he was charged with aggravated assault with a deadly weapon and spent time in a state mental health facility. The charges were later dropped.

HARRIS COUNTY SHERIFF RON HICKMAN: This rhetoric has gotten out of control. 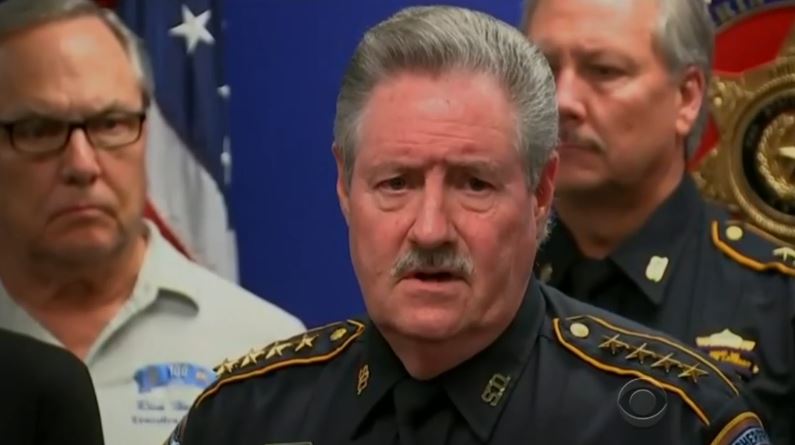 VILLAFRANCA: Some have called the statement insensitive. More than a thousand residents of all races came together this weekend to emphasize harmony.

VILLAFRANCA: An attorney for Miles says he will enter a plea of not guilty. The place where Goforth was killed was turned into a large memoria. the deputy will be buried Friday.