Norah O'Donnell had a memory lapse on Friday's CBS This Morning, as she expressed her disgust over San Diego Mayor Bob Filner's alleged sexual harassment of women. O'Donnell exclaimed, "I know we shouldn't editorialize, but this behaving badly – it's gone overboard at this point." [audio available here; video below the jump]

The anchor apparently isn't self-aware, because she has regularly injected her personal commentary into her journalism, particularly when she interviews conservatives/Republicans. Her track record during her first several months on the CBS morning newscast:

-Before she became CBS This Morning anchor, O'Donnell served as a substitute anchor on Face the Nation in June 2012, and just before the Supreme Court upheld ObamaCare, she speculated that if the law was struck down, "it might be better for the President, because then he can put the onus back on the Republicans."

-Less than a month later, on CBS This Morning, she gushed over a public display of affection between President and Mrs. Obama: "Whoo-hoo-hoo! Hot in here!"

-O'Donnell pressed Rep. Paul Ryan later that week on the morning show on the issue of extending current income tax rates. She asked, "You're calling them tax policies and tax code. You're afraid to call them tax cuts now?" O'Donnell laughed out loud when the Wisconsin Republican affirmed that "they're not tax cuts," and replied, "Oh, Congressman, come on!" 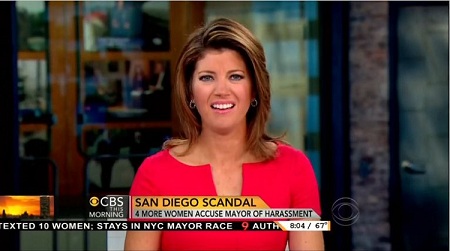 -On the October 4, 2012 edition of CBS This Morning, the anchor asserted that President Obama left his "greatest hits on the cutting room floor" during a presidential debate with Mitt Romney. During the same broadcast, O'Donnell also attacked Romney for his opposition to federal funding of PBS: "This may have been the first time in a presidential debate that Big Bird was mentioned. It seems kind of like a silly thing to bring up."

-The CBS journalist barely contained her contempt for then-NRA president David Keene during a January 2012 interview: "The NRA put out this ad in which you mentioned the President's kids....Why is it not off-bounds to use the President's kids or anybody's kids in a political ad?"

-O'Donnell shamelessly forwarded President's Obama's pro-gun control talking points during an interview of Republican Senator Johnny Isakson in April 2013:  "Do you think your fellow Republicans owe the families of these Newtown victims a vote?"

-The anchor predicted on the June 26, 2013 episode of the CBS morning newscast that pro-abortion Texas State Senator Wendy Davis is "going to become big figure now, I think, in Texas politics." A day later, she and co-anchor Charlie Rose tossed softball questions at Davis, and all but encouraged her to run for higher office.

-During an interview of National Review's Rick Lowry on July 10, 2013, O'Donnell claimed that "the Republican Party is in demographic death spiral unless they do something on immigration reform."

O'Donnell did, however, give Bob Filner's Democratic party ID just before she editorialized, something CBS hadn't done in their reporting on the sex scandal in two weeks. All three network morning shows gave Filner's political affiliation on Friday, ABC and NBC doing so for the very first time.