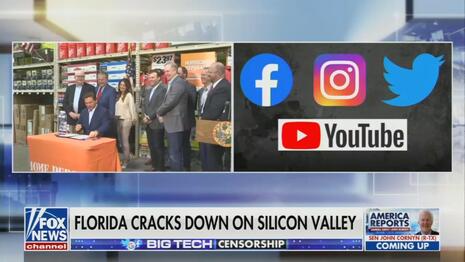 DeSantis signed the state’s new pro-free speech law on May 24. The law immediately drew criticism from leftists ranging from the media to the U.S. Senate, all of whom suddenly pretend to care about the First Amendment.

Several outlets have criticized the Florida free speech law. CNN Business whined that “Questions about the bill's constitutionality are rooted in First Amendment cases prohibiting the government from compelling speech by private entities.”

The Washington Post quoted Eric Goldman, a professor at Santa Clara University School of Law in California, in an attempt to undercut the law. Goldman reportedly told The Post that the law was “obviously unconstitutional.” The Verge simply said, “Many are already skeptical about the new law’s legality.” Vanity Fair tried to downplay the bill DeSantis signed “as a political prop.” And Morning Joe host Joe Scarborough called the bill a “political stunt” and said, “it's most likely unconstitutional.”

The Orlando Sentinel recruited an interest group that has also apparently taken issue with the free speech law. “Florida taxpayers will also end up paying their share in the cost of enforcing new regulations, and for the inevitable legal challenges that will come along with the legislature's effort to adopt a law with glaring constitutional challenges,” complained Matt Schruers, President of the Computer & Communications Industry Association, in an article for The Sentinel.

Even a politician from a different state has called out the law. Sen. Ron Wyden (D-OR) called the law “an invitation for extremists, racists and liars to register as political candidates just to keep their posts online.”

The law prohibits platforms from deplatforming candidates. It would impose a fine of $100,000 per day for statewide candidates and $10,000 per day for censoring other candidates. The bill was introduced following former President Donald Trump’s suspension from at least 10 Big Tech platforms. The Facebook Oversight Board recently decided to temporarily uphold Facebook's ban of Trump — for now. The Board kicked the decision back to Facebook, and insisted that the platform review the decision within six months.