On Thursday night, ABC and NBC cheered the “historic” agreement of an outline for continued talks with Iran and declared that “the United States could be entering a new era in its relationship” with the world’s leading state sponsor of terrorism.

Reporting from Lausanne, Switzerland for NBC Nightly News, chief foreign affairs correspondent Andrea Mitchell reflected on the “18 months of tough negotiations” that “end[ed] with an all-nighter” with the possibility that “the United States could be entering a new era in its relationship with Iran and President Obama is telling critics this will make our world safer.”

In a tease prior to Mitchell’s report, interim anchor Lester Holt characterized the announcement as “a historical agreement with Iran” and later noted “that President Obama quickly proclaimed would ensure Iran will never be able to develop a bomb.”

Turning back to Mitchell, she again toted the White House line: “After marathon talks that almost broke down, an agreement far more specific than many had expected. The weary negotiators set off to sell it back home as President Obama launched what will be a tough campaign.”

Also filing a segment from Lausanne, Ann Curry cited the wide coalition against the deal that include Israel and “surprising company” in “much of the Arab world.” However, she reported that “the agreement was welcomed by many in Iran, desperate to get out from years of crippling economic sanctions.”

In addition, she concluded her story by telling viewers that “Iran’s foreign minister and his team are expected to be greeted with a hero’s welcome when they return home tomorrow.”

Over on ABC’s World News Tonight, anchor David Muir similarly promoted the idea of the outline being a “historic deal” and sought to play up the significance of Thursday’s news by bringing up the fact that “President Bush once declar[ed] Iran part of the axis of evil” while Obama ruled Thursday afternoon that “this deal is a matter of war and peace.”

Covering the talks in Switzerland for ABC, chief foreign correspondent Terry Moran began his report by touting the President’s remarks today in which he was “finally hailing the deal done” (even though the agreement serves as the outline for a deal that’s yet to be written).

Meanwhile, the CBS Evening News used the on-screen caption “historic nuclear deal” at the onset of its coverage, but offered relatively balanced reporting throughout its three segments that totaled five minutes and 14 seconds.

Anchor Scott Pelley told viewers at the beginning of the program that stopping Iran from possessing a nuclear weapon remains “a big if” as Thursday’s agreement “is a detailed framework for future negotiations, not a done deal.”

Prior to a report from congressional correspondent Nancy Cordes on reaction in Washington, portions of an interview Kerry gave State Department correspondent Margaret Brennan were aired and included numerous tough questions for Kerry.

Among them, Brennan confronted Kerry with the fact that “Iran says none of their nuclear facilities are going to shut down” and told him flatly that it “sound[s] like a political win for Iran's Supreme Leader.”

Further, Brennan pressed the secretary of state on “[h]ow can you know they won’t cheat” and if he views the deal as “basically a long-term bet on the future of Iran.”

A partial transcript of the segments from April 2's NBC Nightly News is provided below. 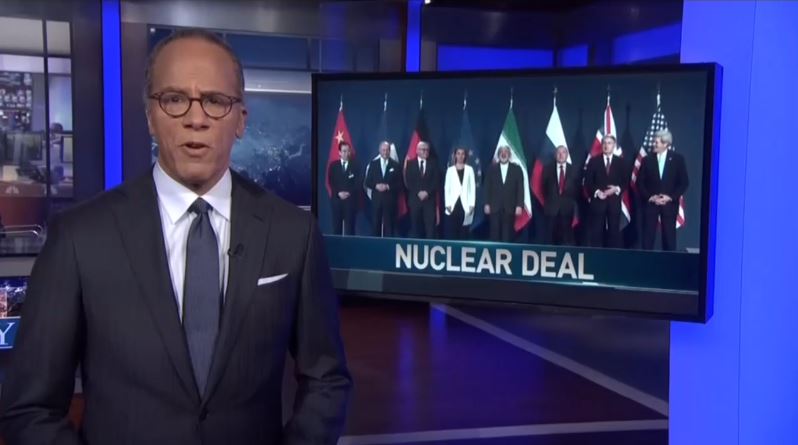 LESTER HOLT: On this Thursday night. Nuclear deal. A historic agreement with Iran. Tonight, what's in it and what it means for Iran's ability to make a nuclear weapon.

HOLT:  Few things have rattled the world quite like the prospect of Iran developing a nuclear weapon, which is why all eyes this week have been glued on a small city in Switzerland where today, nearly around the clock negotiations with Iran on how to curb its nuclear program finally produced the framework of a deal. One that President Obama quickly proclaimed would ensure Iran will never be able to develop a bomb, but then there’s the issue of what Iran gets in return and whether any deal will hold. Our team has it covered. We begin with Andrea Mitchell in Lausanne. Andrea.

ANDREA MITCHELL: Good evening, Lester. It’s been 18 months of tough negotiations, ending with an all-nighter that still left several key issues unresolved., but tonight the United States could be entering a new era in its relationship with Iran and President Obama is telling critics this will make our world safer. After marathon talks that almost broke down, an agreement far more specific than many had expected. The weary negotiators set off to sell it back home as President Obama launched what will be a tough campaign.

MITCHELL: But he and Kerry couldn't agree on when they would be lifted and Zarif immediately objected to a State Department fact sheet tweeting: “There is no need to spin using “fact sheets” so early on.” Zarif and Kerry also couldn’t agree on a joint statement. [TO KERRY] If you couldn't agree on standing up together and announcing together exactly what you've agreed on here, what makes you think that in the next three months you’re actually going to actually come to an agreement?

ANN CURRY: This is Ann Curry. The U.S. and Iran are trumpeting today’s deal, but others are deeply skeptical. Israel called it a historic mistake. Prime Minister Netanyahu tweeting: “Any deal must significantly roll back Iran’s nuclear capabilities and stop its terrorism and aggression.” And Israel has surprising company. Much of the Arab world agrees Iran, with its regional and nuclear ambitions, cannot be trusted. That includes another U.S. ally, Saudi Arabia.

CURRY: But the agreement was welcomed by many in Iran, desperate to get out from years of crippling economic sanctions. NBC’s Ali Arouzi in Tehran. 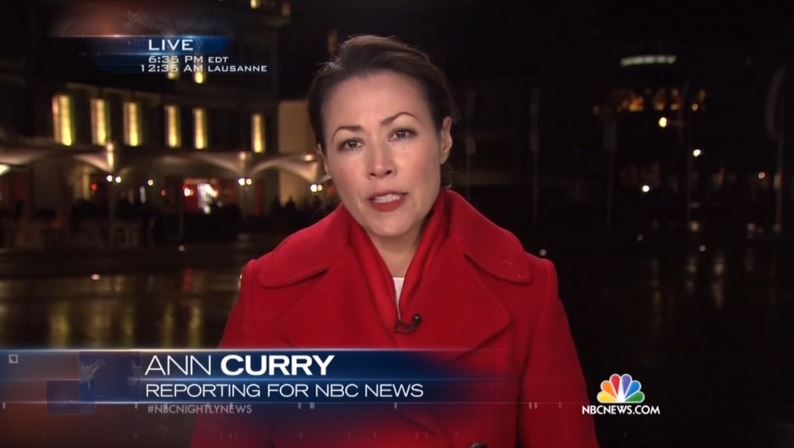 ALI AROUZI: When the news of the deal reached Tehran, some people took to their cars and went to the main squares in the city, honking their horns and slashing v-signs celebrating the news.

CURRY: And Iran’s foreign minister and his team are expected to be greeted with a hero’s welcome when they return home tomorrow.

The relevant portions of the transcript from ABC’s World News Tonight with David Muir on April 1 can be found below. 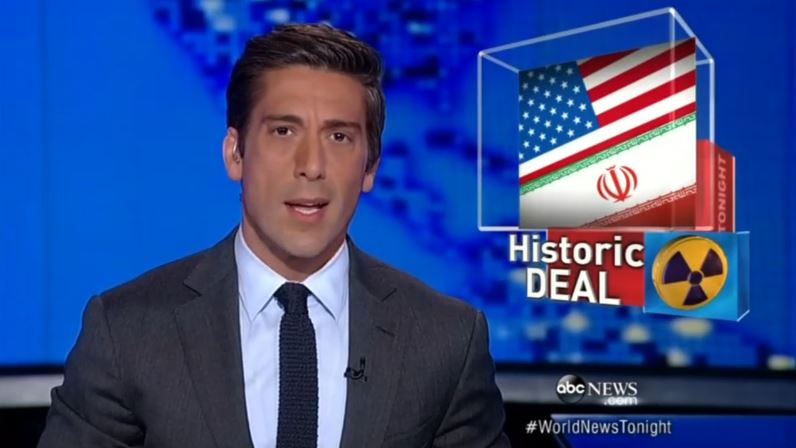 MUIR: Now, to that historic deal with Iran. Tonight, has the U.S. and its allies successfully blocked Iran from making a nuclear bomb, at least for now? Iran, tonight, agreeing to nuclear inspections for 20 years, and keep in mind, the U.S. has not had diplomatic relations from Iran since the hostage crisis in 1979. President Bush once declaring Iran part of the axis of evil. Tonight, President Obama saying this deal is a matter of war and peace. ABC's chief foreign correspondent Terry Moran in Switzerland, with what America gets out of this deal and what Iran gets in return.

[ON-SCREEN HEADLINE: Historic Deal; Will It Prevent a Nuclear-Armed Iran?]

MORAN: So, what did the U.S. get? The breakout time. How long it would take Iran to build one bomb is increased from just two to three months now to a year. Major Iranian nuclear sites will be redesigned for civilian purposes only and a strict regime of monitoring and inspections will last for at least 20 years and what does Iran get? Sanctions relief, phased in over time. This was Iran's main goal. Also, Iran will still be able to research and develop advanced nuclear technology and Iran will keep making non-weapons grade uranium. Critics in Congress, ready to kill the deal. 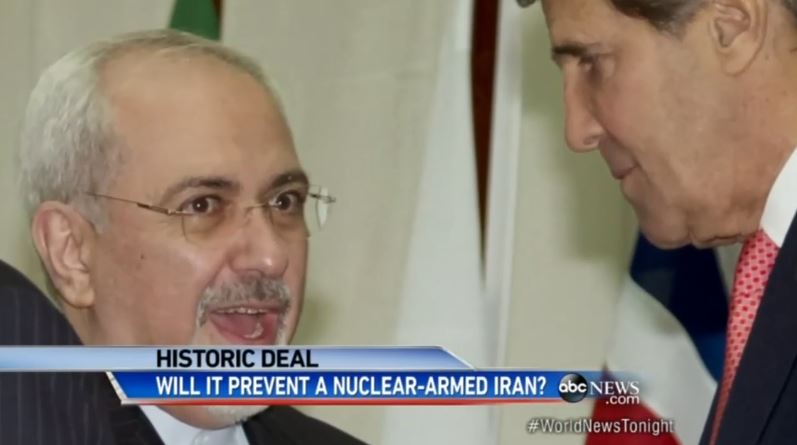 MORAN: But a weary Secretary of State Kerry, sharply rejecting the idea he got taken to the cleaners. [TO KERRY] Did Iran win here?

MORAN: The deal announced today was very general, really just a framework agreement. There's months of hard negotiations ahead and when I asked Secretary Kerry if the whole thing could still fall apart in those months, he said, “of course.”