Ahead of President Obama’s speech on immigration on Thursday night, the major broadcast networks all did their parts to push the arguments in favor of his executive amnesty ranging from a whole segment devoted to a family that would benefit from the President’s executive order to promoting one pro-amnesty group.

On the CBS Evening News with Scott Pelley, over two minutes was spent on segment promoting a family of children born in the U.S. with an illegal immigrant mother, who currently is in an Arizona detention center, but now could be allowed to be freed and apply to become a U.S. resident under the President’s executive amnesty.  [MP3 audio here; Video below]

Anchor Scott Pelley introduced CBS News correspondent Ben Tracy’s report as “the story of a divided family” to which Tracy introduced the three children, ranging from 16-years-old down to age 10, and how their mother was arrested last year as the family was crossing some railroad tracks in Arizona.

The woman was subsequently deported back to Mexico, but soon made it back before being sent to the detention center. Conveniently, the family Tracy reported on would fall under “[t]he President's executive action” which will “shield” their mother from deportation.

In the meantime, Tracy lamented that “[t]he Avilas are being shuffled between family members in the Phoenix area” and mentioned how one of the children wrote “a letter to immigration officials asking them to free her” so she can come watch him play soccer. His report included numerous emotional softball questions sprinkled throughout it as well.

Over on NBC Nightly News, NBC News senior White House correspondent Chris Jansing was all too helpful to the pro-amnesty crowd as well and spent the first portion of her report from the Washington offices of the liberal group United We Dream as they were “gearing up to defend President Obama” from Republican criticism.

In the program’s tease, anchor Brian Williams declared that there’s a “[s]howdown over immigration coming to a head tonight as the President boldly goes where he threatened to go and it's controversial.”

ABC’s World News Tonight anchor David Muir painted a picture for viewers at the top of the broadcast that, on side of the debate on immigration, there have been children in favor of amnesty: “We've seen the images of the young dreamers with their message, ‘immigration reform starts here.’”

With no competing photo or innocent caption, Muir said that, on the other side, stand “others” who “believe the President is overstepping his power.”

The relevant portions of the transcript from the CBS Evening News with Scott Pelley on November 20 is transcribed below. 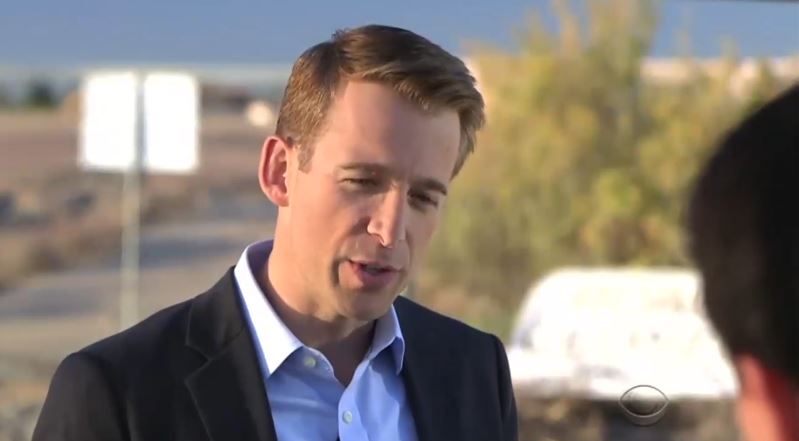 SCOTT PELLEY: Tonight, taking his case to the people. The President explains why he's ignoring Republican warnings and allowing millions of illegal immigrants to stay. Major Garrett has that. Ben Tracy with a family divided.

BEN TRACY: So when you go to visit your Mom, what do you tell her?

CHRISTOPHER AVILA: I just tell her I love her.

PELLEY: Good evening. President Obama will address the nation this evening to lay out his plan for reforming the immigration system on his own terms in defiance of congressional Republicans. Senate GOP Leader Mitch McConnell said the President will come to regret it. The President's plan will spare as many as five million people who are in the United States illegally from being deported, and Major Garrett has more for us now from the White House. Major.

MAJOR GARRETT: Scott, in excerpts just released by the White House, the President will say in his prime-time address to the country, taking on the challenge Republicans have exceeding his own presidential powers. One excerpt reads as follows: “And to those members of Congress who question my authority to make our immigration system work better, or question the wisdom of me acting where Congress has failed, I have one answer: Pass a bill.” The President's actions will shield parents of children here legally from deportation and expand protection for young adults brought to the U.S. illegally as kids. The White House is framing President Obama's unilateral actions in terms of security, accountability and efficiency.... 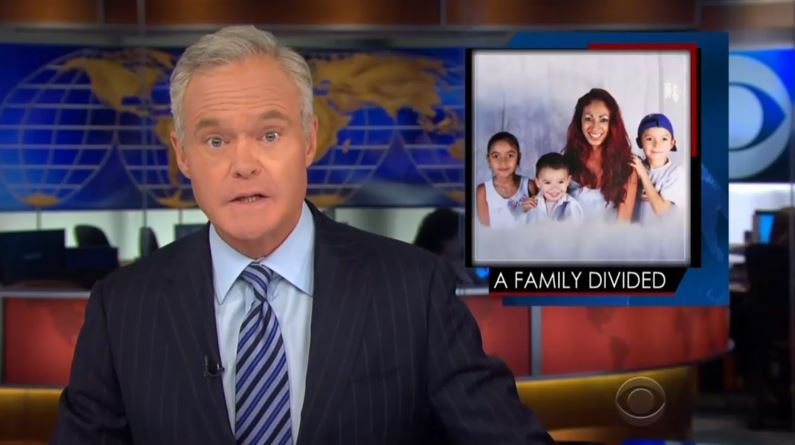 JULISA AVILA: We were actually crossing like right here, about right there when the police had pulled up.

BEN TRACY: Last December, Julisa Avila was walking near these train traction outside of Phoenix with her Mom. She says they did not see this no trespassing sign. Her Mom was arrested.

J. AVILA: They called everyone and said she got picked up by the police and we don't know what's going to happen with her.

TRACY: 36-year-old Norma Bernal is an undocumented immigrant, so she was deported back to Mexico. She tried to cross the border again in April to get back to her family and was arrested. She's now in this Arizona detention center waiting for a deportation ruling. Her son Christopher is 10 years old. [TO CHRISTOPHER AVILA] So, when you go to visit your Mom what, do you tell her?

C. AVILA: I just tell her I love hoar.

TRACY: [TO CHRISTOPHER] How do you feel when you leave?

C. AVILA: Pretty sad because I see her just through the door saying bye, and it's really hard for me.

TRACY: Julisa, Christopher, and their brother Alexis were all born in the United States and are American citizens. There are an estimated four million undocumented immigrants now living in this country with their U.S.-born children. The President's executive action would shield most of them from being deported. The Avilas are being shuffled between family members in the Phoenix area. Julisa is 16 and wants to finish high school. Christopher just wants his mom to see him play soccer. He wrote about it in a letter to immigration officials asking them to free her.

C. AVILA: Because I see other kids hugging and kissing their moms, and I feel sad because I don't have my Mom to be there and to hug and kiss me.

TRACY: [TO AVILA CHILDREN] What happens to the three of you if your Mom gets sent back? 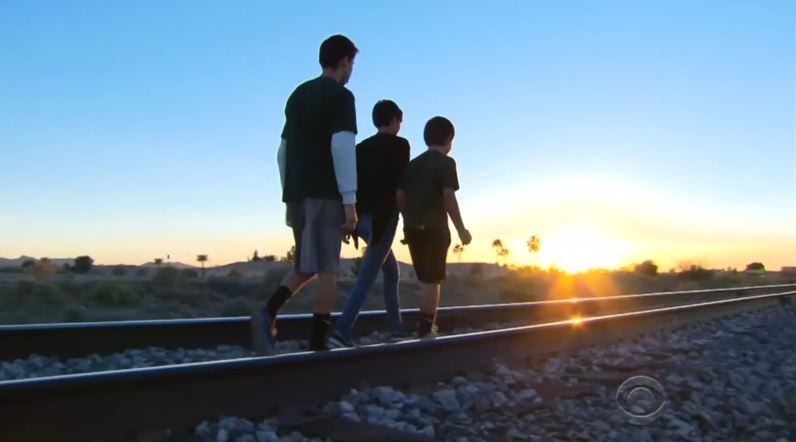 TRACY: [TO AVILA CHILDREN] Do you know anything about Mexico?

C. AVILA: No, I just know a lot of bad things happen over there.

TRACY: [TO AVILA CHILDREN] If it's the only way to be with your mom, will you all go there?

ALEXIS AVILA: Yeah, we would.

TRACY: But, for now, this is a family divided and headed in very different directions. Ben Tracy, CBS News, Phoenix.

The relevant portions of the transcript from November 20's NBC Nightly News can be found below. 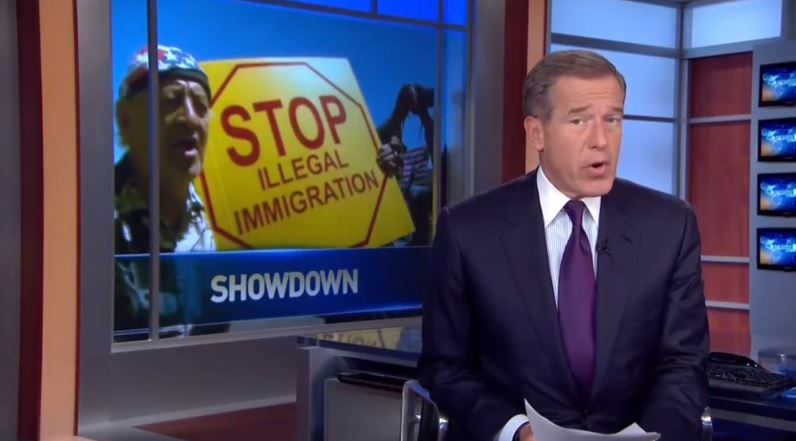 BRIAN WILLIAMS: Showdown over immigration coming to a head tonight as the President boldly goes where he threatened to go and it's controversial.

WILLIAMS: Just a short time from now, in the face of fierce opposition and as he threatened to do, President Obama will announce sweeping changes to U.S. immigration policy and he's doing it on his own. Speaking from the White House tonight to outline his plan, our senior White House correspondent Chris Jansing is there for us this evening. Chris, good evening.

CHRIS JANSING: Good evening, Brian. Tonight, in a ten-minute speech, White House officials tell me the President will push the immigration envelope as far as his lawyers think he can go and make his case for acting alone. Already, both sides have launched aggressive campaigns to win the war of public opinion. At the Washington offices of United We Dream, immigration advocates are gearing up to defend President Obama.

UNIDENTIFIED UNITED WE DREAM ACTIVIST: We are giving a face to what many just think is [MAKING QUOTATION SIGNS] “a problem.”

JANSING: Tonight, the President will propose the most sweeping changes to immigration in nearly three decades, allowing nearly 5 million undocumented immigrants to stay in the U.S. legally. People like Miguel Caseras, whose son Jose always worried he'd been arrested.

MIGUEL CASERAS: It's an awful feeling to know that. To know that my parents the only thing they're doing is working to provide for their kids to provide food, to pay for the rent. 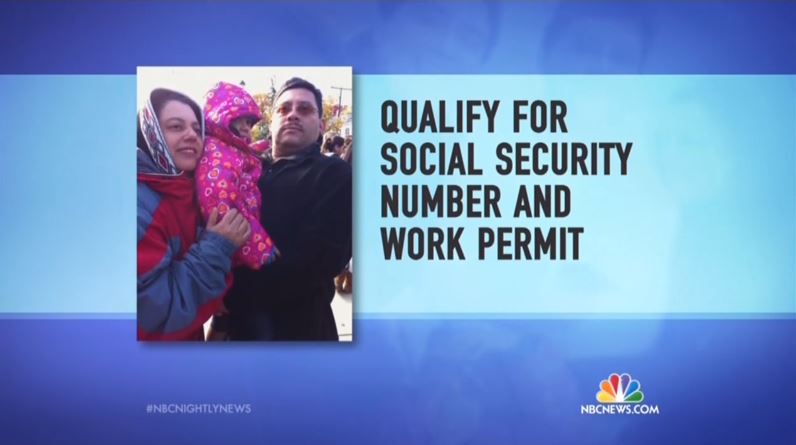 JANSING: Under the President's plan, the Caseras family could apply to stay here. They've been in the U.S. the minimum five years and have a child who's a citizen. They'll qualify to get a Social Security number and be a able to work, but are not eligible for Social Security benefits or ObamaCare. More dreamers are eligible too, undocumented immigrants who have grown up in this country and in a change, it doesn't matter how old they are, as long as they came here before 2010.

JANSING: Deportation will now focus on gang members, suspected terrorists, felons and anyone who's come to the U.S. since January 1st. Republicans are mobilizing the opposition. Arguing even the President has said it's blatant overreach.

HOUSE SPEAKER JOHN BOEHNER: The President has said before that he's not king and he's not an emperor, but he's sure acting like one.

SENATE MINORITY LEADER MITCH MCCONNELL (KY.): If President Obama acts in defiance of the people and imposes will on the country, Congress will act. 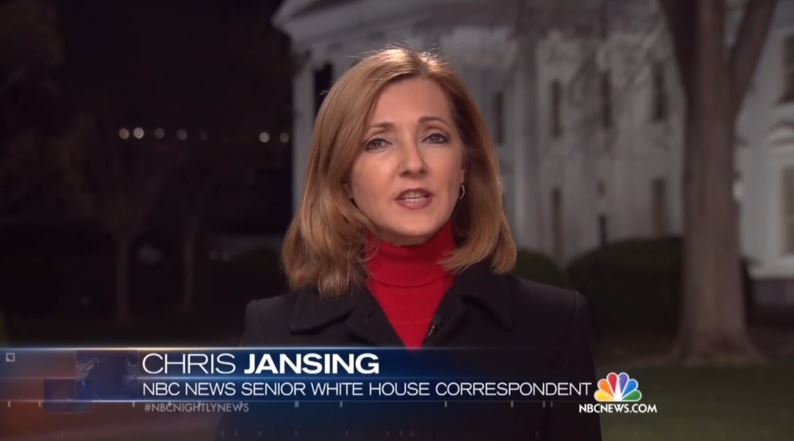 JANSING: So far, no indication Republicans have settled on exactly what they'll do, but they say it will be aggressive and the President's answer, well, we just got some excerpts from the speech, he's going to tell them, if you question my authority to do this, then pass a bill. Brian.

WILLIAMS: Chris Jansing on the north lawn tonight. Thanks. Live coverage this evening on MSNBC, on our sister network Telemundo, and streaming live, of course, at nbcnews.com.

The relevant portions of the transcript dealing with illegal immigration on ABC’s World News Tonight with David Muir on November 20 can be found below. 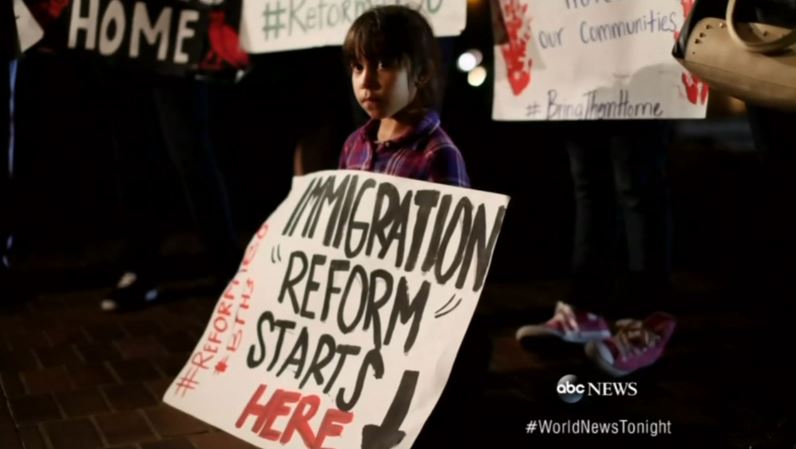 MUIR: Breaking news tonight, we have now learned what the President is about to do, his new immigration plan, addressing the nation a short time from now, strong opinions on both sides of this. We've seen the images of the young dreamers with their message, [QUOTING ACTIVIST POSTER] “immigration reform starts here.” Still, others believe the President is overstepping his power. Here’s what we know: President Obama is expected to lay out legal status for up to 5 million undocumented immigrants, including many parents of children born here in the U.S. 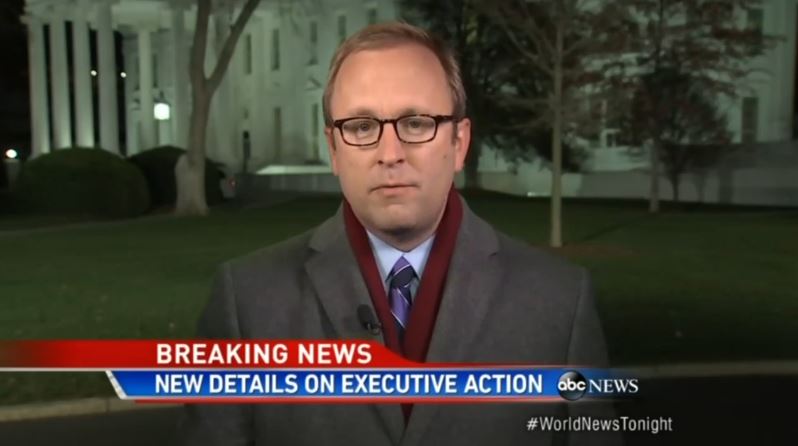 MUIR: Prepared to defend it, but, Jon, what else are you learning about how Republicans plan to respond here?

KARL: Well, Republicans are planning to do everything they can to stop this. That includes suing the President to try to say this is illegal, unconstitutional, and also trying to undo it through congressional action, but David, this will be very hard to do while Republicans are in Congress. The only way to really be sure they can do it is to control the White House. If they did that, they can undo it with the stroke of a pen.