On Friday afternoon, Texas Democratic gubernatorial candidate Wendy Davis and her campaign released a new ad that took aim at her Republican opponent Greg Abbott as a “hypocrite” for supposedly not caring about the disabled after becoming a paraplegic in 1984.

Since the despicable ad aired, only one story has been offered on the morning or evening newscasts of the major broadcast networks through Monday night. That single story came on Tuesday morning during the 7:30 a.m. half-hour of NBC’s Today by NBC News national correspondent Peter Alexander and lasted just over two minutes. [MP3 audio here; Video below]

Leading into the segment, substitute co-host Natalie Morales described Davis’s ad as “provoking a nationwide debate over the boundaries of attack ads” with the on-screen headline for the segment wondering if it was a “new low in political ads.”

Alexander played a portion of the advertisement and tagged it as one that has Davis now “fighting back against a storm of controversy for making her challenger's physical disability an issue in their race.”

Also included were responses from Davis, who “doubled down” on the ad and its message, and Abbott, who appeared on the Fox News Channel (FNC) last night on Hannity. Abott commented that “[m]y reaction is that if she wants to attack a guy in a wheelchair, that's her prerogative. As for me, I'm running a different type of campaign.”

To his credit, Alexander mentioned that Abbott consistently has been shown ahead of Davis in the polls as Election Day is three weeks from Tuesday and that such attack ads typically come from candidates who are running behind and not in the lead.

Nonetheless, he strangely opined that it is “[s]till unclear whether it will help or hurt her campaign” and reminded viewers that:

Davis embarked on her campaign for governor of Texas, where a Democrat hasn't won a statewide office in two decades, after bursting on to the national scene with a marathon filibuster in pink sneakers, an effort to block a restrictive abortion law.

Aside from the Today segment, ABC’s This Week on Sunday briefly mentioned the Davis campaign’s ad during the program’s “Buzzboard” segment and that lasted for a scant 23 seconds. Co-host Martha Raddatz described it as “a stunning ad” where Davis accused “Republican Greg Abbott, disabled 30 years ago, of hypocrisy.”

A portion of the ad was played, then Raddatz ended by saying that “Abbott called the ad offensive.”

After a weekend in which even MSNBC and Mother Jones could not defend Davis and the ad, Davis responded on Monday to the criticism. An article from Politico said Davis “brushed aside criticism of her controversial ‘wheelchair ad’” during “an event attended by several disabled supporters.”

Speaking at her Fort Worth, Texas campaign office, Davis refused to stay away from Abbott:

“In 1984, Greg Abbott sought out and received justice following a horrible injury, rightly so…receiving millions of dollars. And I’m glad, he deserved justice for the terrible tragedy that he endured,” Davis said at her Fort Worth, Texas, field office. “But then he turned around and built his career working to deny the very same justice that he received to his fellow Texans rightly seeking it for themselves.”

She added, “Greg Abbott got his justice. Why doesn’t he believe that a rape survivor or a person with a disability or a victim paralyzed forever…should get justice too? What makes Greg Abbott think it’s okay to deny them, his fellow Texans, the justice that he rightly went to court to receive?”

The portion of transcript from ABC’s This Week with George Stephanopoulos on October 12 that mentioned Wendy Davis can be found below. 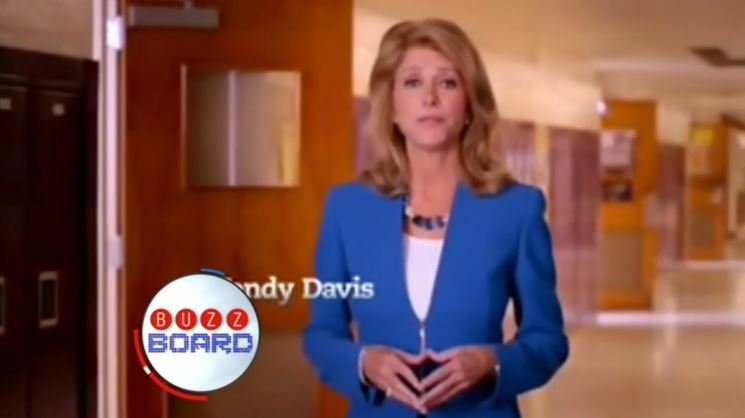 NARRATOR OF WENDY DAVID AD: A tree fell on Greg Abbott. He sued and got millions. Since then, he spent his career working against other victims.

The full transcript of the segment that aired on NBC’s Today on October 14 can be found below (h/t to my colleague Kyle Drennen for the assist in obtaining the transcript). 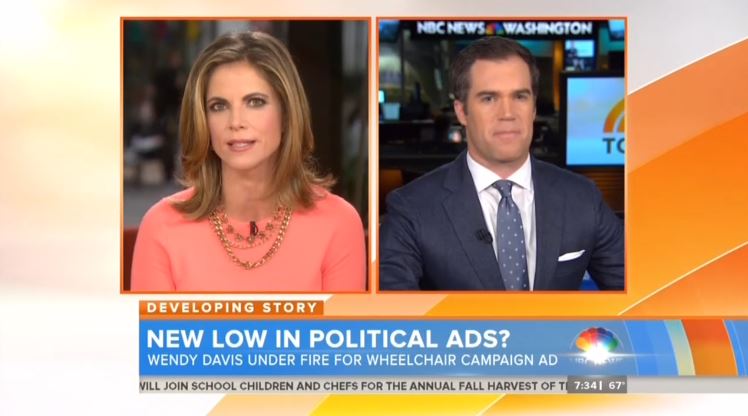 PETER ALEXANDER: Natalie, good morning to you. So in just four days since this ad was released in Texas, it has quickly become one of the most talked about spots of the entire 2014 election season, with people on both sides of the political aisle asking whether it's appropriate or in bad taste.

NARRATOR OF WENDY DAVIS FOR TEXAS AD: A tree fell on Greg Abbott. He sued and got millions. Since then, he's spent his career working against other victims.

ALEXANDER: This is the ad that has Texas gubernatorial candidate Wendy Davis fighting back against a storm of controversy for making her challenger's physical disability an issue in their race.

NARRATOR OF WENDY DAVIS FOR TEXAS AD: Abbott argued a woman whose leg was amputated was not disabled because she had an artificial limb.

ALEXANDER: Davis charges her Republican opponent with hypocrisy for denying settlements, like the one he received after a 1984 accident that left him partially paralyzed, to others.

NARRATOR OF WENDY DAVIS FOR TEXAS AD: Greg Abbott. He's not for you.

ALEXANDER: When asked if the ad exploits Abbott's disability, Davis doubled down.

WENDY DAVIS: The intent was to demonstrate Greg Abbott's hypocrisy and has shown that he cares only about advancing his own interests and often to the exclusion of other people.

GREG ABBOTT: My reaction is that if she wants to attack a guy in a wheelchair, that's her prerogative. As for me, I'm running a different type of campaign. 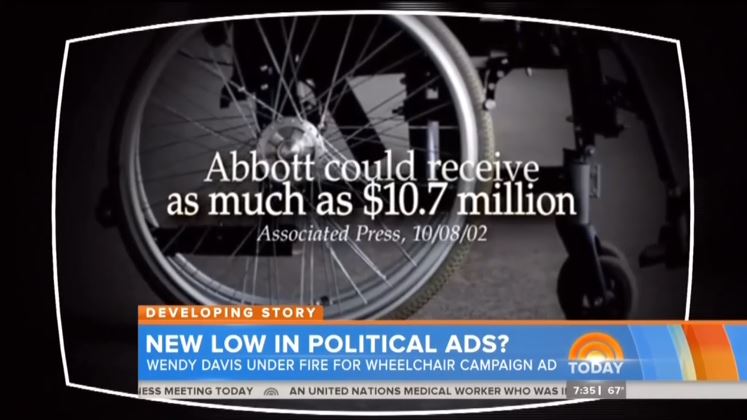 ALEXANDER: Davis embarked on her campaign for governor of Texas, where a Democrat hasn't won a statewide office in two decades, after bursting on to the national scene with a marathon filibuster in pink sneakers, an effort to block a restrictive abortion law. Now it's her attack ad that's causing a nationwide debate. Still unclear, whether it will help or hurt her campaign. And recent polls have consistently shown that Greg Abbott has a comfortable lead over Wendy Davis. Political analysts agree that these are the types of ads that typically come from a campaign that is behind, not one that's in the lead. Natalie.