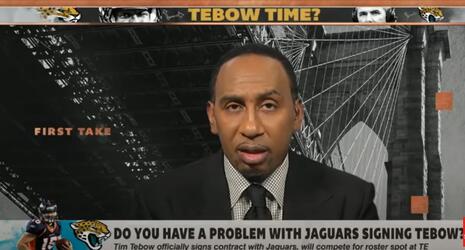 ESPN’s Stephen A. Smith has a big problem with Tim Tebow, who officially signed a contract this week with the Jacksonville Jaguars. Bloviating on the First Take program today, Smith and colleague Max Kellerman debated whether or not they have a problem with the return of Tebow.

As soon as hostess Molly Qerim gave Smith the floor he went on a rampage about Tebow and white privilege.

“Is this not white privilege? It is white privilege,” Smith asked and answered. Then it was on to George Floyd and the suffering of African Americans:

“When George Floyd ultimately was murdered … it wasn’t about him. It was about the symbolism of what transpired because black people repeatedly felt it was the proverbial knee on their back. We constantly have to claw and scratch our way.”

“We see someone of a different ilk, a different ethnicity getting opportunities that we know we would never get. That’s where the words white privilege come in. … There’s no way to eradicate white privilege without white individuals giving up some of their privilege.”

Smith said that when he sees an opportunity like the one Tebow is getting in Jacksonville, it is clear that it happens only for “white folks,” but not for everybody else. It’s not a matter of Tebow getting a chance to make the Jaguars’ team; instead it’s “problematic.”

Furthermore, Tebow did not earn his new opportunity in pro football, Smith said. He only got the chance because he has a relationship with Urban Meyer, the coach at Jacksonville and Tebow’s former coach at Florida.

After denigrating white people, Smith claimed he loves Tim Tebow, who’s a “good dude” and wishes him nothing but the best. Nevertheless, “Blacks do not get these opportunities,” Smith whined.

Disagreeing with Smith, Kellerman said he has no problem with the Tebow signing. However, he encouraged Tebow to speak out about how Colin Kaepernick now needs to get another chance to play in the NFL, too.

Which is all so stupid because Kaepernick has trashed the NFL for years, and there’s no room in the league for a disgruntled former employee with a ton of baggage.

On Fox Sports’ The Undisputed, Shannon Sharpe renewed his hatred of Tebow.

“Just think about how arrogant a person must be to play a professional sport that you’re really not that good at, and the 30-plus other teams saw what ya had and they said, ‘you’re not good.’ … ‘You know what? I’m just arrogant enough to say, I’m gonna go back to the sport that jettisoned me and I’m gonna switch positions. I haven’t played in six years, haven’t taken an offensive snap in nine years, but I’m just that good.’ Tim Tebow cain’t play no tight end. And he’s gonna rub guys the wrong way … .”

Aside from ESPN and Fox Sports, Tebow and his fans also took a thrashing from Emma Vigeland of The Young Turks.

“Tim Tebow fans are the most delusional, batshit insane bunch of people I’ve ever come across. And I cover politics,” Vigeland wrote on Twitter.