Salon’s Amanda Marcotte is on to you, Republicans. She can see right inside your pasty white scalps and into your racist brains. She knows you’d be fine with Trump dining with white supremacists, as long as it did not hurt your election chances. 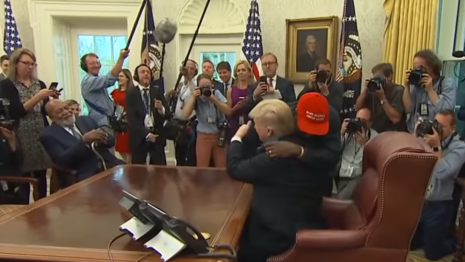 As part of that, she had a piece out titled “Republicans don't care that Trump's a white supremacist — just that he's indiscreet about it.”

In it, Marcotte not only condemned right-wing politicians as racist bigots but also contemptibly categorized their voters similarly. She wrote, “GOP base voters, who either fully agree with Trump's racist views or don't care enough to hold it against him, dig in their heels and refuse to reconsider their cult-like worship of the former president.”

Marcotte then went on to call Trump an “overt white nationalist.” Does she not know what “overt” means or is Marcotte purposely misleading her readers?

Of course, she did not give a single example of Trump being an overt white nationalist.

This next part was hilarious. Marcotte wrote, “The latest reminder of Trump's racial views: He had dinner with Ye, formerly Kanye West (whom Vox dubs ‘a poster child for antisemitism and white nationalism’) and Ye's new Holocaust-denying buddy Nick Fuentes.”

So Ye, a black man, is a poster child for white nationalism?

Marcotte thought she found proof the GOP does not care about racism. She noted that while Republican politicians criticized Trump’s judgment for hosting the dinner, they did not mention: “That white supremacy is reprehensible, regardless of its impact on the GOP's electoral outcomes. Nor did they mention that rising white nationalism has led to mass murders.”

Does Marcotte believe the right does not view white supremacy as disgusting and that they do not care about mass murders motivated by this sick ideology?

She then did a little concern-trolling, lecturing Republicans that “white supremacist views offend some number of Americans who might otherwise be inclined to vote for their party. In the end, GOP leaders send the message that the problem with Trump's overt racism is not that it's wrong or damaging, but that it's inconvenient to white conservatives.”

It is 2022, and except for a small fringe, Americans detest these imbecilic ideologies. But the left is so brainwashed with hatred that they generalize this to half of the country.