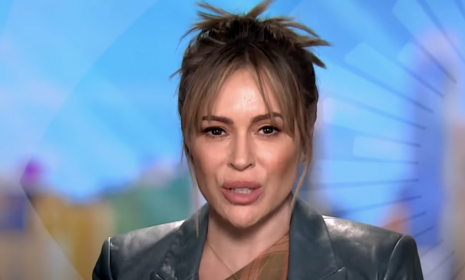 Well here is spectacular news! Alyssa Milano is back in the spotlight! It has been so long since the last time we heard from the melodramatic Hollywood virtue-signaler-in-chief that we almost forgot what the true face of hypocrisy looked like. She gave us a potent reminder on her recent interview on CBS Mornings.

Milano joined CBS Mornings co-host Gayle King on Wednesday to discuss her new Netflix film, "Brazen," a crime thriller that debuts on the streaming platform on January 13. But since Milano is more of a leftwing activist than actress, CBS devoted a bunch of time talking about her activism and praising her as a champion of women.

King introduced the interview with the “actor, activist, and author,” saying, “She’s best known for her roles on that hit show 'Who’s the Boss?' and 'Charmed,' and now for her activism in the #MeToo movement and on issues like voting rights. Now she’s starring in a new Netflix film. It’s called 'Brazen.'”

Gayle King further praised Milano’s activist career. “You play a character who’s a champion for women, who doesn’t want women to be exploited and who bucks the status quo. Must have been a very difficult role for you to play,” King teased.

Sure thing, Alyssa. What was it that former "Charmed" actress, #MeToo activist, and alleged Weinstein rape victim Rose McGowan said about you? Oh yeah, she called you and other #MeToo activists “fake performatives and profiteers.”

Of course, over the last couple of years it’s been obvious that Milano’s activism – particularly in the #MeToo movement – has been more about political opportunism and self-aggrandizement than it has been about helping the women most in need.

Sure, she led the #MeToo ladies in Hollywood take down Harvey Weinstein and attempt to eradicate a culture of sexual harassment – by the way, how hard is that when everyone in the media was cheering them on? But her #MeToo role also led her to loudly parroting the uncorroborated and reputation destroying accusations against Brett Kavanaugh in 2018.

Back then the #MeToo mantra was “Believe all women,” even to the point of destroying an innocent then-SCOTUS candidate. But when Milano’s personal friend and preferred 2020 Presidential candidate Joe Biden dealt with accusations of sexual assault from Tara Reade in the months prior to the election, Milano decided to side with Biden.

And don’t forget how much of an abortion-lover Milano is. The lady has declared that if it weren’t for her two abortions, she would have never had the career she had. Yeah Charmed must have been so worth the death of her two children. So the woman that defends killing her own children is a “champion for women.” The whole thing is absolutely ridiculous.