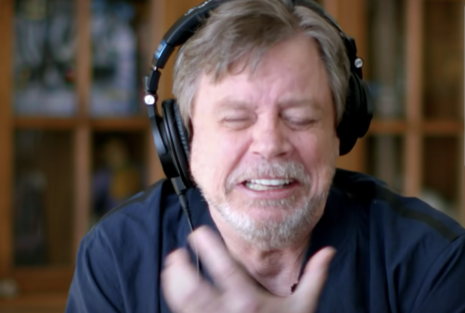 With the wildfires in California and Oregon raging, a hurricane here or there in the Gulf of Mexico and Trump not beating his chest over the sins Americans have committed against Mother Earth, lefty entertainers like Cher and Luke Skywalker himself, Mark Hamill, began hyperventilating that the president will “GET US ALL KILLED.”

Star Wars star Mark Hamill went full idiot in response to Trump’s recent remarks that the fires in California will start to cool off eventually and that science might not have the answer to prevent forest fires and other natural disasters. That kind of insolence towards the sacredness of the lefty climate change agenda sent the actor into a tizzy, who tweeted in all caps, “HE'S GOING TO GET US ALL KILLED. #ScienceKnows #FactsMatter.”

Remember Mark, your background is in sci-fi/fantasy. Lightsabers and death stars are highly theoretical at the very best.

Cher freaked out over everything happening. In a grammatical abomination of a tweet, the 70-something singer/actress wrote, “Wanted 2 Tell You It’s Ok 2 Have Anxiety,Trouble Sleeping,Sleeping 2 Much,Eating 2 Much,Eating 2 Little.This Is Not a Normal Time,Normal President, Fires,Hurricanes,Pandemic.We Need 2Talk.I Get Anxious”

The singer added, “But We Will Get Through This With [love] 4 Each other.Believe We Must SAVE Our [planet].” Yes please, guys. Cher’s right. Don’t off yourselves because of climate change. It’s really not worth it.

Hocus Pocus actress Bette Midler tweeted, “Wildfires a welcome distraction to the #OdiousOne, who thinks we will forget all about ‘Losers’, and ‘Suckers’ and the newest revelations from #BobWoodward.” The “OdiousOne,” really? Whatever, Bette’s so kooky that a conservative politician is the embodiment of evil who uses natural disasters to his advantage.

She added, “He gets to thrill his base who love denying science.  They should all be compelled to watch ‘Wall-E’.  Multiple times.” Though again, why would a sci-fi movie meant for kids about robots with human sentience clarify anything?

Comedian Chelsea Handler quoted a dramatic Washington Post excerpt, tweeting, “So to sum up: The West is burning; the Arctic is melting; the National Hurricane Center is tracking eight major systems; and the WHO reports the largest single-day increase of coronavirus cases globally.’- Wapo.” She then mocked “Trump supporters,” asking them, “is this all a hoax?”

And Bill Nye, (who’s on this list because he’s more of an entertainer rather than an actual “Science guy”) urged his fans to “#VoteforScience.” In his tweet, the former PBS kids show host urged, “The West Coast is on fire. Powerful hurricanes are approaching our Gulf Coast. I know many have been against taking any action or spending any money to address climate change, but we must get to work.”

“So, in the next few weeks, please #VoteforScience,” he added. Yeah perhaps we will, and that means not voting for the guy endorsed by actors and science enthusiasts who moonlight as crackpot gender theorists, telling kids about their genitals via Netflix special. 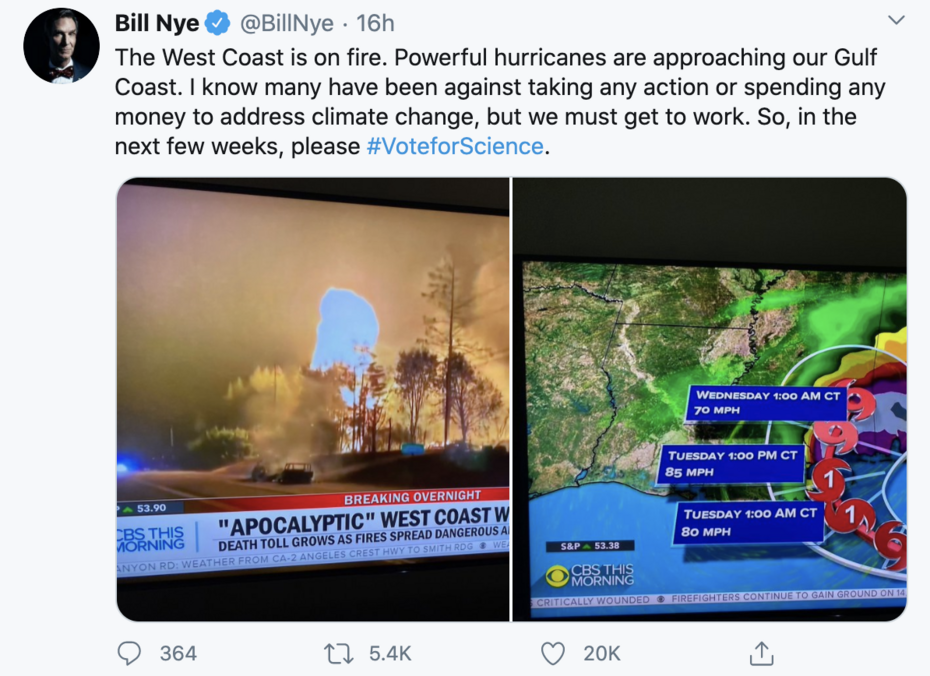