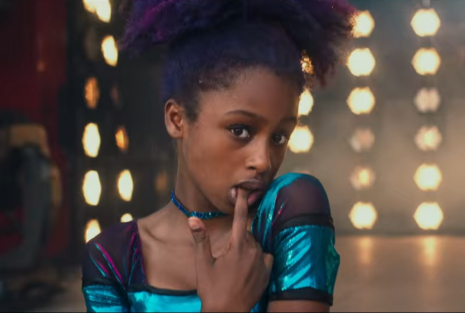 For some reason, they seem to think that only wild right-wing conspiracy theorists would object to scenes of 11-year-olds in booty shorts humping the ground, putting their fingers in their mouths suggestively, and giving the camera come-hither looks. Or young girls spreading their legs, bending over, and twerking while the camera focuses in on their crotches and behinds. (Yes, I did watch the entire film.) The cinematography is so bad that even Facebook took down a clip from Cuties due to “sexual exploitation,” but the liberal media are still trying to cover for the film's sexual exploitation.

On Monday, Axios caused a stir when a post on the issue went so far as to say that Republican politicians’ “condemnation of the film is linked to a child sex trafficking conspiracy theory central to the QAnon movement.” Ben Collins, NBC News’s “dystopia beat” reporter, quote tweeted a now-deleted Axios tweet with the article title “Netflix faces its QAnon moment as lawmakers push to investigate ‘Cuties,’” saying, “This is well framed. Good on Axios.” But within hours, the article and headline were modified with an editor’s note saying, “This story was updated after publishing to remove references to the QAnon conspiracy theory.”

Good on Axios. But they weren’t the only media outlet that has tried to smear protests over Cuties as being part of QAnon: New York Times, BuzzFeed News, and The Verge all did the same thing.

Others wrote that reactions of horror to Cuties’ display of French Lolitas are not reasonable, instead the outrage is a sign of the “far right’s obsession with pedophilia” (Rolling Stone) and a “creepy conservative obsession” (Slate).

The Wrap claimed, “Laura Ingraham promoted a Qanon conspiracy regarding the Netflix movie ‘Cuties’” because she did a segment condemning the awful film.

Refinery29’s Asia Ewart called Sen. Ted Cruz’s outrage over Cuties an “obvious dog whistle to QAnon and other conspiracy theorists” and wrote, “Perhaps Cruz is only attempting to heighten conspiracists who believe that Hollywood ‘Dems’ are responsible for profiting off of sex trafficking, but by doing this, he is only aligning himself with the dangerous right-wing conspiracists his party keeps trying to distance from.”

Social media wasn't much better. Washington Post’s Alyssa Rosenberg, who defended Cuties and told people to watch it because “they might find a lot to like,” tweeted that “it's become a whole #QAnon inflected thing with people arguing that it's functionally child pornography…”

Vox’s Aja Romano tweeted, in part, “The controversy surrounding [‘Cuties’] seems to be propaganda fueled by QAnon types and anti-Semites.”

Cuties' defenders want you to believe that "nuance" and "context" can somehow make raunchy stripper moves by child actors shot in ways meant to titillate audiences ok and that the outcry is based on propaganda manufactured by QAnon. Sounds like they're peddling conspiracy theories of their own.

If you’re disturbed by Netflix and the media’s support of this harmful film, please call Netflix at 888-373-8390 and tell them to cancel Cuties. 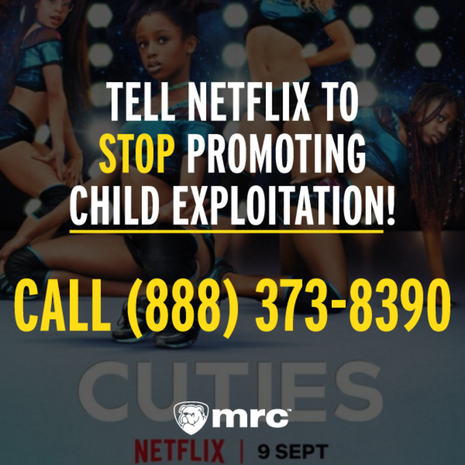