Netflix's 'Cuties' Is Much Worse Than You Think 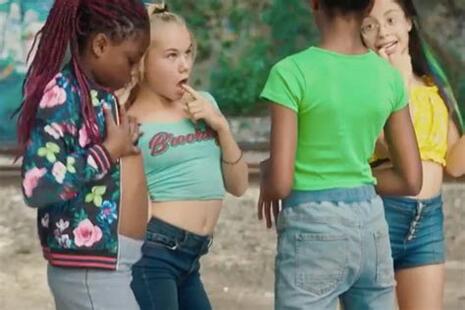 The movie used real child actors and a controversy arose over Netflix's promotional materials for the film last month which they apologized for, saying the "inappropriate artwork...was not OK, nor was it representative of this French film." Well, I watched the movie and I'm here to tell you that it is much worse than anybody thought.

IMDB, the world's foremost movies and ratings online database, published a parental warning on their site that accurately sums up the most offensive content in the movie:

Trigger warning: An 11-year old girl watches a female rap music video where naked women role play through dance both heterosexual & lesbian sex acts.An 11-year-old female dance group then mimics these sexual moves via on themselves and on each other while the camera zooms in on their sexual body parts as they erotically writher. This can be highly distressing to viewers.

A pair of tight leather pants on an 11-year-old girl are forcefully pulled down in the midst of a scuffle; the camera glances at her panty exposed bum.

The warning was later inexplicably removed from IMDB. Tracy Beanz, Editor-in-Chief of Uncover DC, captured a screenshot before the accurate description was scrubbed from the internet.

In addition to the blatant visual soft child pornography, the dialogue spoken by the girls in the movie was often graphic and completely inappropriate. Here was some sample dialogue overheard by Amy between the girls while they were looking at pornographic material on a phone:

Jessica: Ew. Gross. What if the guy pees in her mouth?

Angelica: It's not gross, it's just nature.

Jessica: What do you mean, nature? You think that's how babies get made?

Jessica: Look at the girl's face. I bet it's rape.

Yasmine (excitedly): I hear if it's rape, it goes right through your whole body. The guy puts it in and it comes out your mouth.

Angelica: No guy's thing is long enough to come out of your mouth.

Yasmine: Well, it depends on the guy, of course.

Jessica: I've seen my brother's. It's not that long.

Later on in the film, one of the girls found a condom on the ground, blew into it to turn it into the shape of a breast and then put it inside her shirt.

Shockingly, many in legacy media have praised this sick film. Rolling Stone called Cuties a “coming-of-age movie caught in the culture wars” and added, “Here’s what the film’s not: a salacious bit of pedo-bait designed to appeal to baser instincts rather than better angels.”

The media has been gaslighting the public. The film itself signaled to the audience that they knew exactly what they are doing. At one point, the girls snuck into a laser tag stadium without paying and were caught by a guard. Remember, at this point, the adult audience has watched multiple pedophilic scenes. When the guard said he needs to call their parents and grabs one of their arms, the girls accused him of being a pervert:

"Stop copping a feel, you child molester," one Cutie says.

"What's the matter with you, man? You some kind of pervert or something?" says another.

"You want us to call our lawyer? Is that what you want?" they ask.

A second guard arrives and asks, "What's going on here?"

"Your friend was trying to grope us," a Cutie says.

"No, no, no, not at all," the guard replies fearfully.

Next, one of the girls got a message on her phone, revealing that the group had made the twerking finals. The first guard asked them to leave. Before they left, Amy danced sexualized moves in front of him. The second guard smiled and watched while the first guard tried to remain stoic.

Later on at home, Amy started to take off her clothes and offer herself sexually to a different adult man whose phone she stole. He pushed her away and said, "What's wrong with you?" She then ran into the bathroom with the phone, pulled down her pants and underwear, took a picture of her crotch, and published it online.

The message was clear: "Look at this precocious, sexpot 11-year-old trying to seduce grown men! The men have to resist her advances!" This is nothing more than twisted pedophile fantasy.

Law enforcement needs to investigate the individuals involved in the making and distribution of this film. Netflix must face consequences. The streaming service is sexually exploiting children and must be held responsible.