In Baltimore This Week, 6 Fan-Attended Baseball Games Lost; Press Not Interested in the Cost

At NewsBusters this morning, Matthew Philbin posted on how Michael Eric Dyson, in a guest appearance on MSNBC (where else?), placed a great deal of blame for Baltimore's blight on "the ways in which the Baltimore Ravens and Baltimore Orioles with their tax-exempt status were given tremendous goodies to stay into the city."

It would be reasonable to believe that Dyson, who has revealed a vengeful streak in the recent past, is quite pleased at the financial losses the Orioles, their employees, and businesses in the vicinity are being forced to absorb. Thanks to arguably necessary decisions made today, they will continue.

In July 2013, after George Zimmerman was found not guilty in the death of Trayvon Martin in Florida, he said that "Not until, and unless, the number of white kids die that approximate the numbers of black and other kids who die, will America see."

The Os, who have already lost two home dates due to riot-related game cancellations on Monday and Tuesday, will play their game against the Chicago White Sox tomorrow in an empty Camden Yards. According to the Associated Press, it "is believed to be the first game without fans in major league baseball's 145-season history." 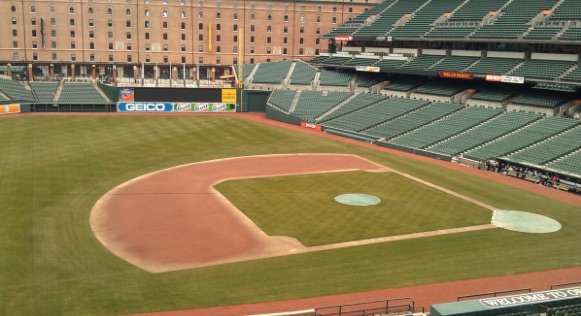 Additionally, the team has decided to play three scheduled home games against the Tampa Bay Rays this weekend at Tropicana Field in St. Petersburg. Finally, the games which were not played on Monday and Tuesday against the Chicago White Sox will be made up in a doubleheader on Wednesday, May 28.

So the Orioles have lost six fan-attended home dates this week, and will only make up one of them (possibly two, if May 28 is treated as a day-night doubleheader, which seems unlikely). Thus, 5 percent or more of the team's scheduled fan-attended 2015 home dates are gone.

Orioles owner Peter Angelos isn't discussing how much these moves are going to cost his team, and the press appears completely uninterested in attempting or providing independent estimates. A story at ESPN indicates that "MLB spokesman Matt Bourne said the league office would not comment as to how, if at all, it would compensate the Orioles for the lost attendance."

The average ticket price at Camden Yards is just under $25. The field's capacity is 45,971. The team's average attendance last year was 30,426. Using that average attendance, the revenue loss, assuming no help from MLB and before considering net profits from concessions and parking fees, is north of $750,000 per game (see, that wasn't difficult). With those other items, $1 million per day seems like a good, excuse the expression, ballpark estimate. The team may also have to deal with possible lost broadcast revenue — at least one game's worth, it would seem, unless it can convince broadcasters that the May 28 doubleheader will somehow make it all a wash.

To those who don't care about whether the supposedly richie-rich Orioles take hit, consider the employees who work in concessions and parking, as well as businesses in the surrounding area — including the hotel which would have hosted the visiting team this weekend — who will lose days of activity they'll really never get back.

There's another factor which cannot be ignored. I couldn't help but notice that average attendance at Camden Yards has fallen by almost one-third since the late-1990s, even though the team has made baseball's playoffs two of the past three years after a 15-year drought.

Readers in the Baltimore area would know this better than me, but if the decline in attendance has in any way been related to deteriorating safety in the surrounding neighborhood, the team may see a further decline even after order is reliably restored — assuming that happens. If the leftist professional protest movement decides to target the area longer-term and try to turn Baltimore into another Ferguson, look out below.